Says Susan Bysiewicz, who has divided her career between public service and practice: “Women’s issues are economic issues, and if you uplift women and girls, you’ll be uplifting families.” 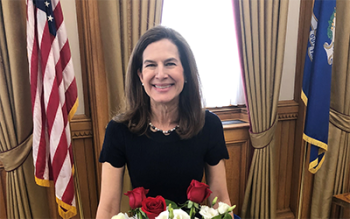 As Connecticut’s lieutenant governor, Susan Bysiewicz presides over the state Senate, serves as acting governor as needed, and is charged with overseeing preparations for the 2020 census, among other official duties. The Democrat also leads the Governor’s Council on Women and Girls.

She and running mate Gov. Ned Lamont launched the council shortly after they were inaugurated in early January. Made up of legislators and leaders from around the state, the council is charged with providing a coordinated state response to issues that could affect women, girls, and their families. Its focus includes everything from eradicating potential discrimination in policies and programs and encouraging women’s empowerment and advancement through education, to workforce equity and entrepreneurship, leadership, and facilitating their health and safety, reflecting themes the executive team heard from hundreds of individuals and organizations they consulted during their transition period.

While it’s just one of her varied responsibilities as lieutenant governor, the council is close to the heart of Bysiewicz, who has divided her career between the practice of business law and public service. Before taking office in January she was a partner at Pastore & Dailey; prior to that she served 12 years (three terms) as Connecticut’s secretary of the state, six years in the state legislature, and several years as an associate at the law firms of White and Case in New York and Robinson and Cole in Hartford, Conn. Not only has she made advancing opportunities for women central, she says, to every position she’s held, but she found models for her own career interests in those of two path-breaking women: Connecticut Gov. Ella Grasso, the first woman elected to lead a state; and her mother, Shirley Raissi Bysiewicz, the first tenured female law professor at the University of Connecticut School of Law.

“Women’s issues are economic issues, and if you uplift women and girls, you’ll be uplifting families,” Bysiewicz says in an interview. “When I was secretary of the state, I was the state’s chief business registrar. We started a small business unit where we particularly tried to help women-owned, minority-owned, and veteran-owned businesses. I had the opportunity in that office to help thousands of people start businesses and grow them. And as Gov. Lamont can tell you, I am always advocating for competent women and for diversity as we appoint hundreds of people to volunteer boards and commissions in state government and also as we consider judicial and other leadership appointments.”

Bysiewicz says she’s excited that women comprise 52% of executive leadership positions and people of color comprise 40% of Connecticut’s cabinet level positions and believes that this is historic. “Our government will be better and our private sector, for that matter, will be better if there are more women and there is diversity both in our public and private sectors.” She is active in her state’s promotion of the “Paradigm for Parity” movement that seeks to close the gender gap in corporate leadership and achieve parity by 2030, and is actively working with companies in Connecticut to sign onto that pledge and engage in other state initiatives regarding workforce equity and economic empowerment. Bysiewicz also highlights two recent legislative victories that help advance the council’s goals: the establishment of a $15 minimum wage and passage of a paid family and medical leave law that has been described as the most progressive in the country.

“We’re really proud of that,” she says. “People have been trying for years to get a paid family and medical leave program in place.”

Pay equity is another policy focus; Bysiewicz says she and Lamont want the executive branch to lead their state’s public and private sectors by example. A recent study showed that, on average, white women employed by the executive branch are paid slightly above white men doing the same work, but African American and Hispanic women are paid 90 cents on the dollar as compared to white men. “Compared to the federal government and other states, that’s really good, but clearly we have more work to do,” she says.

Finding inspiration
Bysiewicz, who recently completed a six-year term on the Duke Law Board of Visitors, found a model for a life in public service from Grasso, Connecticut’s governor from 1975 to 1980, whom Bysiewicz met in high school through a youth in government program. “I remember her speaking about what she did as governor and how she had the opportunity to help people every day,” she says. “I always admired her compassion for people and her strength as a leader during some very difficult times.” After making Grasso, a Democrat, the subject of her senior paper at Yale University, Bysiewicz published Ella: A Biography of Ella Grasso, while she was in law school.

Bysiewicz traces her interest in law and passion for women’s rights to her mother, whose Greek immigrant parents lacked education but believed in it fiercely for their son and five daughters, all of whom became professionals. Like Ruth Bader Ginsburg, a fellow academic who became a good friend, Shirley Bysiewicz graduated law school in the 1950s but could not find a private law firm that would hire a woman. “But my mother loved teaching and she loved writing, and she particularly loved encouraging women to go into the legal profession,” Bysiewicz says.

Her mother, who also served as law librarian for more than 30 years while teaching courses that included gender discrimination when the topic was in its infancy, was intent on advancing women’s rights, including advocating for the Equal Rights Amendment when Connecticut lawmakers were debating prior to ratifying it in March 1973. “She would take us to the state capital with her,” Bysiewicz says. “We knew she was always fighting for the rights of women.” Among other public boards, Bysiewicz’s mother was appointed by Grasso to Connecticut’s Permanent Commission on the Status of Women, and by Gov. William O’Neil to the Judicial Selection Commission, giving her platforms to encourage women to go into law and to become judges.

The encouragement worked on Bysiewicz and her sister, Karen, a member of the Duke Law Class of 1991. Growing up on a farm offered further incentive to pursue a legal career, says Bysiewicz. “If you have ever picked potatoes in August from 7:30 a.m. until dark, you will soon decide that working with your brain is much easier than working with your back.”

Bysiewicz, who still lives in her hometown of Middletown with husband David Donaldson JD/MBA ’87, who she met at Duke, says they both continue to see Duke as “an incredibly inspiring place” that laid the groundwork for her later achievements.

“What I got from Duke Law School was the opportunity to be around some incredibly smart, articulate, and creative people, and then I had the opportunity to work at some great firms because of my Duke Law education,” she says. “I was used to working at a very high level with people who had the highest ethical standards and the highest expectations, and I’ve taken that set of high standards with me to the private and public sectors.” And she uses daily the professional skills she learned at Duke for assimilating vast amounts of information and then distilling it down to tell a simple and powerful story.

“That's what makes for good advocacy, whether it's in a legal setting or whether it's before the legislature or with the public about policies,” she says. “Law school also teaches you about speaking in public and about collaborating with other people and groups to get a successful outcome. So I feel like what I do every day in public service was informed by what I did in law school and what I learned in law school.”