A constructive collaboration: Curtis A. Bradley and Neil S. Siegel 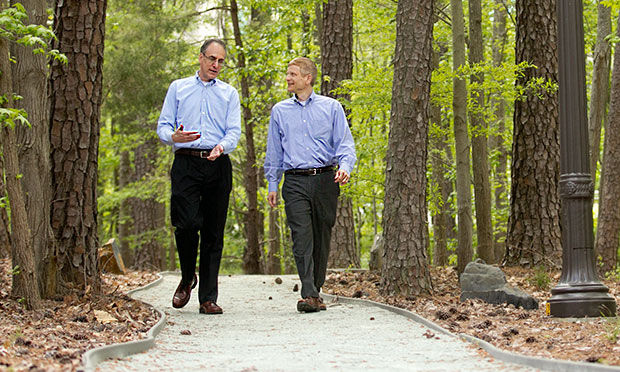 In the seminar, Siegel, the David W. Ichel Professor of Law, and Bradley, the William Van Alstyne Professor of Law, led a dozen upper-class students in considering various approaches to constitutional interpretation and theories of constitutional legitimacy. The two public law scholars have since co-authored three articles that break new ground concerning the relationship between the constitutional text and other constitutional materials and the effect of historical practice in helping to define the respective powers of the three branches of the federal government.

“It evolved organically,” Siegel said of their partnership, which advances a longstanding focus of his wide-ranging scholarship: how the American constitutional system functions in practice and how scholars, advocates, government officials, and jurists craft their arguments so as to both advance their constitutional commitments and secure the legitimacy of the system itself. Their first article, he said, gelled while they were preparing a short piece for a scholarly roundtable they hosted as a tie-in to their seminar.

“We realized through talking about our class materials and working on the conference that we shared similar ideas,” Bradley said. “At first we thought we had just one article, but we quickly saw projects that could branch out of it. We find that we see things together that we wouldn’t have seen separately, given our different insights and experiences with the law.”

Their seminar students were particularly engaged by the ideas that resulted in their first article, “Constructed Constraint and the Constitutional Text.” (Several of them even helped shepherd it into publication in the Duke Law Journal. “It was a community experience,” said Bradley.)

While most interpreters feel the need to maintain fidelity to the written text and believe that clear text is dispositive, Siegel and Bradley posit that the very act of deciding what is clear or unclear in the text is itself likely affected by other considerations, such as views about the purpose of the particular provision, the requirements of the constitutional structure, or how the governmental branches have long interpreted the Constitution.

“You have a variety of different approaches to interpretation that in our view are often interacting with the text, either filling in gaps when the text is thought to be unclear or affecting perceptions of textual clarity or ambiguity,” said Siegel.

“It turns out that reading the Constitution is itself a complicated and dynamic enterprise,” added Bradley.

The Supreme Court’s 2014 ruling in NLRB v. Noel Canning is one of several examples they offer to show the use of historical practice when constitutional text fails to address an issue or is perceived to be ambiguous, or even when custom seems to make apparently clear text somewhat ambiguous. In interpreting the Recess Appointments Clause in Noel Canning, the Court expressly relied on customary practice to discern what is meant in the clause by the term “recess” and also by the phrase “vacancies that may happen.”

“In both Noel Canning and subsequently last year in Zivotofsky v. Kerry, the Court stopped to say, ‘Longstanding historical practice is itself important to how we’re going to understand a piece of the Constitution.’ The fact that the Supreme Court called attention to it has made our entire enterprise ever more salient,” said Bradley.

In their latest collaboration, “Historical Gloss, Constitutional Conventions, and the Judicial Separation of Powers,” forthcoming in the Georgetown Law Journal, Bradley and Siegel shift their focus to the way customary practices of government institutions affect the powers of the federal courts, an area that has been largely ignored by scholars. Mining primary records of political-branch debates on such highstakes matters as President Franklin Roosevelt’s 1937 attempt to pack the Supreme Court, they find evidence that historical practice has, in fact, helped define the separation of powers between the political branches and the judiciary. They highlight one debate between former Solicitor General Ted Olson and current Chief Justice John Roberts, newly discovered in records from the Reagan Justice Department, in which Roberts argued, unsuccessfully, that Congress has broad authority to strip the Court’s appellate jurisdiction.

Each of their works has benefitted, Bradley and Siegel say, from the expertise, insights, and diverse perspectives of their colleagues at Duke. In addition to citing writings of colleagues such as Professor H. Jefferson Powell and Margaret Lemos, the Robert G. Seaks LL.B. ’34 Professor of Law, they discuss the work of Alston & Bird Professor Ernest Young on “the Constitution outside the Constitution” at length in “Constructed Constraint.” “To have a large group of really strong public law faculty here who are very responsive, who talk to you in the hallways and give you written feedback is a huge resource,” said Bradley.

In “Constructed Constraint” the titular words are both emphasized, Bradley said.

“The text matters. Unlike some critical legal scholars of the 1970s and 1980s who suggested that text really did no actual work and its application was all discretionary, we think there is constraint in our legal tradition and in our culture. Sometimes the text is more constraining than it is at other times. And our position is that some of that constraint is itself constructed or based on considerations other than just looking at the text and the plain meaning of text.”

Added Siegel: “We have the oldest written constitution in the world and yet we have witnessed dramatic changes in facts and values over the course of centuries. How does that happen? It happens in part because the text is not as constraining as is suggested by the simple assertion that ‘when the text is clear you comply with it.’ There is disciplined flexibility.”