DAs, Quigley-McBride write on the need for transparency in plea negotiations

District attorneys need to take ownership of their institutions’ roles in perpetuating systems of oppression. The Plea Tracker Project is an unprecedented look at how prosecutors use their discretion and a rare example of prosecutors putting a check on their own practices. 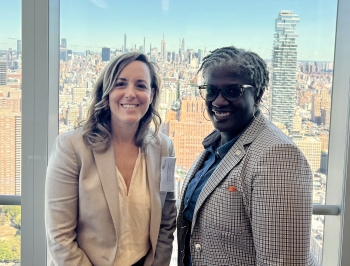 OPINION: Why prosecutors must shine a light on plea agreements

Note: This commentary was originally published in The Boston Globe on Oct. 18, 2021.

Contrary to what is portrayed in television courtroom dramas, jury trials in America are rare. Instead, attorneys resolve most cases — an estimated 90-95 percent — through pleas, in which defendants waive their right to trial and agree to plead guilty to certain charges.

Plea bargaining is arguably the most consequential way prosecutors wield their enormous discretion. It is through pleas that the United States has attained the world’s highest incarceration rate, with people of color disproportionately affected.

We should know. Two of us were elected as district attorneys after promising to change how local criminal cases are resolved. Prosecutors can decide to dismiss charges as part of the plea, or reduce felonies to misdemeanors, taking prison off the table. They can seek consecutive or concurrent sentences. Yet, historically, this process, and the inner workings of prosecutor offices across America, has not been very transparent.

To illustrate the importance of prosecutorial discretion, consider the example of two white men in their 30s recently charged with assault and battery in Berkshire County. Neither of the men had prior criminal convictions. Given the similarity between the cases, one might expect similar sentences. Although both men received probation, one received a longer sentence and fines, but the other’s shorter sentence included rehabilitative services.

In most jurisdictions, there is no way to know why one person received a lesser sentence than the other. Perhaps one had a better defense lawyer? Maybe one prosecutor was harsher than the other? Did one victim express a preference, or did the judge alter one of the plea agreements? Did one defendant reject the first offer, but the other accepted right away? While it is commonplace for lawyers to exchange offers, negotiations aren’t reflected in court records, so these questions remain unanswered. It is a notorious black box that can hide inconsistencies and abuses of discretion.

For the first time, the plea process is being tracked. The district attorney’s offices in Berkshire County and Durham County, N.C., have paired with the Wilson Center for Science and Justice at Duke Law to bring plea negotiations into the light.

Our new Plea Tracker Project began in full force last spring. Prosecutors in Berkshire and Durham now document reasons for their final recommendations to the court and information about how a plea agreement evolved until the case was resolved. The Plea Tracker Project is an unprecedented look at how prosecutors use their discretion and a rare example of prosecutors putting a check on their own practices.

Consider again those two assault cases. The Plea Tracker allows us to see why one case resulted in a shorter sentence — the prosecutor’s goal was to ensure the defendant’s mental health needs were addressed. The defendant in the other case was believed to pose a higher risk of recidivism, resulting in a longer probation period.

Tracking pleas allows an office to evaluate practices and implement new approaches. We can see if there are disparities in offers being made for similar cases, whether one prosecutor tends to be inconsistent with others in the office, if there are racial disparities in outcomes, and if victims are treated equitably. We can identify gaps in the availability of therapeutic services and whether alternatives to incarceration are available and used. In turn, we believe plea tracking improves the legitimacy of our system. It can promote public trust in how prosecutors exercise discretion.

If we are to overcome the pervasive racial and other disparities that infect our criminal legal system, prosecutors must institute checks on their own biases to ensure that we extend mercy fairly, regardless of skin color or socioeconomic factors. The plea tracker can be a powerful tool to identify the causes of disparities in plea outcomes and develop practical solutions. Research suggests that even adding “friction” to plea bargaining — by requiring prosecutors to reflect on each offer — may help check implicit biases.

We hope that participating in the Plea Tracker Project contributes to broader discussions of how communities invest their resources and reimagine the justice system’s role in society. As the nation grapples with the injustices of our criminal legal system, district attorneys need to take ownership of their institutions’ roles in perpetuating systems of oppression. The power and discretion of prosecutors lies at the heart of our criminal system. Opening plea practices to scrutiny and welcoming the results is leading by example. We hope to see more prosecutorial offices shine a light on their own plea practices.