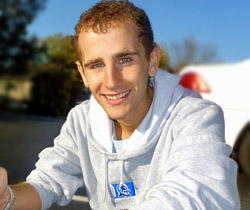 In a photograph taken during the 2012 USA Trail Racing Championship last August, David Roche’s head is down, he is running up a steep, twisted path, and his chest is covered in mud. “I fall a lot,” Roche laughs. “It’s what I’m known for.” He gets up a lot too. He won that race in August and is putting his toughness — and his love for the outdoors — to good use as an advocate for the environment.

Pursuing both a degree in law and a master’s in environmental science from the Nicholas School of the Environment, Roche explains his attraction to public interest environmental law.  “It is something that touches everyone. Every breath you take is a piece of that.”

Roche does more than wax eloquent about his love for nature: he has wholly devoted himself to what he calls “the fight” to make the world — in particular the atmosphere — a cleaner place.  He has taken every class in environmental law offered by Duke Law, has worked in the Duke Environmental Law and Policy Clinic, and has spent summers working for EarthJustice and for the Environmental Defense Fund. He is currently editor-in-chief of the Duke Environmental Law and Policy Forum (DELPF) and helped put together the 2012 Duke environmental law conference titled, “Conservative Visions of Our Environmental Future”.  In his “free” time, he is the chief regulatory officer for BaseTrace, a start-up company that is developing a technology to monitor pollutants that may result from hydraulic fracturing (“fracking”).

Perhaps Roche’s fortitude can be credited to his experience as an undergraduate at Columbia University in New York City. “I hated Manhattan,” he says.  Not only did he find it dirty and crowded and noisy compared with what he was used to — he grew up in rural Maryland — but within weeks of arriving he was injured playing football and had to give up the sport.  He took up bicycle racing. “You develop certain mental skills from endurance sports that you don’t get from being on a team,” Roche says. “You have to be totally self-reliant.” Studying environmental science and racing bicycles, Roche cruised through school, right up until graduation week, when he was hit by a taxi. “I will never live in a Northeastern city again,” he says, grinning. Unable to bike, he took up running.

At Duke, Roche says he found some great running trails — and a strong community of fellow environmental law enthusiasts. “It’s important to have a strong vision when coming to law school and to stick with it,” he says. “It’s easy to be pressured away from the public interest path when you start seeing your peers land on-campus-interview jobs.” His colleagues at DELPF provided a good support network. “Pursuing public interest means living with uncertainty,” he says. “But uncertainty can be a good thing. Things that are worthwhile don’t just come to you. It can be scary but I assume things work if you fight for them hard enough.”

With a reference from Duke alumnus Michael Hiatt ’09, Roche got an internship at Environmental Defense Fund in Boulder during his 1L summer, where he was immediately put to work helping write a brief on the Environmental Protection Agency’s decision to regulate greenhouse gases as air pollutants.  He went back to Colorado his second summer to work for Earthjustice on a brief relating to winter-time ozone. “Usually, pollution is not a problem during the winter, but there’s been a huge increase in the oil and gas production out west. Now, it’s just terrible.”  He loved his work with the public interest organizations. “Fighting for something gives you purpose,” he says.

Back at Duke, Roche tried something new at DELPF, along with his editorial board and Professor James Salzman, one of the journal’s faculty advisors. They came up with a theme, “Disaster Law,” and solicited articles on the topic from prominent thinkers.  Last fall DELPF also held a symposium in Duke’s Reynolds Theater titled “Conservative Visions of Our Environmental Future.” Both the symposium and the Disaster Law issue were successful. “I’m excited for us to be idea-generators and I believe our themes have helped focus environmental scholars on specific issues,” Roche says.  He also believes the themed journal reflects broad viewpoints and shows off the journal’s interdisciplinary roots, with members from Duke’s Fuqua School of Business and Nicholas School, in addition to law students.

Roche’s interdisciplinary approach led to his position with BaseTrace. He says he has “just enough” of a science background to talk with scientists and understand what they’re saying, and this helped him see the value when a Nicholas School friend, Justine Chow mentioned that inert DNA might be useful in tracking pollutants in the fracking process. Roche, who understood the accountability issues surrounding potential contamination from fracking and was eager to help make sure the process is safe for the environment, encouraged Chow to pursue the concept. After some success in the lab, they founded BaseTrace (then called “SafeTNA”) along with a small team of Duke graduate students. The company won the Clean Energy Track of the Duke Start-Up Challenge in 2012, with a prize of $10,000, and received additional funding from Cherokee Investment Partners.  Roche is excited about the company’s prospects.

“We hope to give hydraulic fracturing a fingerprint, which will benefit industry, communities, and regulators,” he explains. He notes that if testing continues on the current path they will be pursuing a marketing strategy by next fall.  Although by then Roche will also be fighting for the environment as a public interest fellow with the Environmental Law Institute in Washington D.C., he plans to race down the interstate every weekend to Duke to help with BaseTrace. “I probably need to get a Prius,” he says, smiling. -- Caitlin Wheeler '97