Stone and Zeke Starr '21 faced a hot bench of three federal judges and argued a case involving a law targeting "habitual drunkards" in the annual competition. 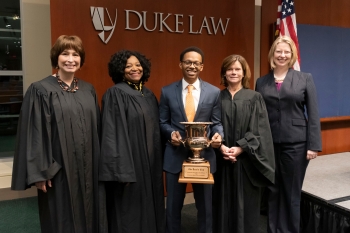 Donovan Stone ’20 withstood a round of tough grilling by a three-judge panel to prevail in the 2020 Dean’s Cup, winning the final round of Duke Law’s premier advocacy competition Monday evening.

Stone and Zeke Starr ’21 argued a Supreme Court appeal of Manning v. Caldwell, a 2019 case in which a Fourth Circuit court invalidated a Virginia statute that permits the civil interdiction of one who has “shown himself to be a habitual drunkard." Subsequently, that individual is subject to criminal statutes restricting the possession and consumption of alcohol.

Acknowledging they faced a “hot bench,” Rawlinson commended both advocates for their poise, fluid delivery and ability to maneuver the questioning, saying they displayed a clear grasp of the facts and hours of preparation.

"Oftentimes judges will steer you away from what you are actually trying to impart, so there is a skill that’s needed in order to get back on track and help the judges to pay attention to the points that you want to emphasize. And both of you did that very skillfully, with a great deal of grace and respect.”

The finalists’ arguments addressed whether a Virginia statute permitting the civil interdiction of “habitual drunkards” violates the Eighth Amendment’s prohibition against cruel and unusual punishment, and whether the term “habitual drunkard” is unconstitutionally vague in violation of the Fourteenth Amendment.

As counsel for the petitioner, Stone opened by asserting that the statute is a reasonable exercise of the Commonwealth of Virginia’s broad authority to regulate alcohol policy within its borders.

But after one minute, the judges unleashed a barrage of questions parsing the terms of the statute, challenging him on whether defendants were given fair notice of prohibited conduct, questioning whether the statute was meant to target homeless people, and asking him to explain how a statute could be considered “civil” if interdiction frequently resulted in criminal charges.

Having reserved three minutes for a rebuttal, Stone stood his ground for the next 16 minutes, answering each question with aplomb and pushing back against what he described as mischaracterizations of its statutes’ terms and intent.

“Virginia is within its rights to take a hard line stance on continued alcoholism,” he insisted. “Ordinary citizens exercising ordinary common sense understand the meaning of 'habitual drunkard.' And it is not cruel and unusual punishment to prosecute individuals for their harmful conduct.

“Our position is that the harm is implicitly and explicitly recognized in the statute through the ‘shown himself’ requirement and the categories of interdiction.”

“Today’s case is about ensuring that a state cannot shackle an individual because of the symptoms of their disease or cloak that action behind a vague and archaic law,” he began before Millett interrupted him.

“Do we have to overrule Powell v. Texas to rule for you?” she asked, referring to the Court’s 1968 ruling that a Texas law criminalizing public intoxication did not violate the Eighth Amendment.

“No, Your Honor, I don’t believe we do,” he said, going on to distinguish the instant case, apply precedent from other binding cases, define terms for the judges, and defend his clients against a law he said singles them out.

“What is the (Virginia) law, from your perspective?” Rawlinson asked.

"Your Honor, it’s a law that criminalizes an individual in each aspect of their disease, the core symptomatic behavior that defines their status,” Starr replied. “The difference from Powell is that all the actions that define their disease are only criminalized for them, not for anyone else.”

“You were unflappable,” St. Eve told Stone. “We were giving it to you – all three of us at the same time, at one point – and you were respectful in answering and not talking over us, even though we were talking over each other at times. You also did a very nice job of pushing back when we were trying to push you into something, of saying respectfully, ‘I disagree.’ You can’t cave – and you didn’t.”

Starr, who won the 2019 Hardt Cup, a moot court tournament for 1Ls, was complimented on his calm demeanor and ability to transition from an adverse question to positive ground.

“You did that in a way that advocates who have been arguing for years and years aren’t able to do,” Millett said. “You have incredible skills. If we could let you grab the other side of that trophy, we would.”

After the competition, Stone said his client’s side wasn’t easy to defend.

“It’s a tough case and my side wasn’t sympathetic,” he said. “I’m not convinced I would have won if this were an actual case but I tried to make my points and do my best with what I was given.”

He said he hopes to use his advocacy skills in white collar criminal defense after clerking in the Northern District of Alabama and the U.S. Court of Appeals for the Fifth Circuit.

“It was nerve-wracking and it was hard not to get flustered, but I tried to keep my composure and I had a lot of fun arguing so I’m happy with how everything turned out,” Stone said.