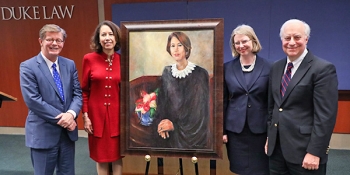 Duke Law alumni, faculty, and friends gathered on Oct. 26 to celebrate Judge Allyson K. Duncan ’75 and unveil a portrait of her that will hang outside the James M. Poyner Moot Courtroom. Duncan has announced plans to step down from the U.S. Court of Appeals for the Fourth Circuit, where she has served since August 2003, as soon as her replacement is confirmed.

“We are so honored to count you among our graduates and to have your portrait serve as a visible reminder to our students and to our community about how hard work, intellectual curiosity, service to others, civil discourse, and high standards for excellence can make the world a better place,” said Kerry Abrams, the James B. Duke and Benjamin N. Duke Dean and professor of law.

Duncan, a Durham native, clerked for Judge Julia Cooper Mack on the District of Columbia Court of Appeals before joining the U.S. Equal Employment Opportunity Commission as an appellate attorney, rising eventually to agency counsel. She later taught law as an associate professor at North Carolina Central University (NCCU) and served as a judge on the N.C. Court of Appeals and as a commissioner on the N.C. Utilities Commission before joining Kilpatrick, Townsend and Stockton in Raleigh as a partner. She was nominated to the federal judiciary by President George W. Bush and confirmed by a unanimous vote in the U.S. Senate.

Calling Duncan “a force in the international arena,” Abrams noted her leadership of the Federal Judges Association, beginning in May 2015, and her subsequent appointment by U.S. Chief Justice John Roberts to chair the International Judicial Relations Committee of the U.S. Judicial Conference. Having a delegation of judges from Moldova hosted by Duncan attend classes and meet with Duke Law faculty on Oct. 26 offered proof of the strong connections she has built with nascent judicial systems in other parts of the world, said Abrams.

Duke University President Vincent Price praised Duncan’s institutional leadership and dedication both as a member of the Law School’s Board of Visitors since 2004 and as a Duke trustee since 2011. “As past chair of the trustees’ Academic Affairs Committee and current chair of the Graduate and Professional Education Committee, she has helped and is continuing to help redefine education at both the undergraduate and graduate levels, including here at Duke Law,” he said. “I’ve been very lucky to get to know her personally in her capacity as a trustee and I am so grateful that she has been willing to share her great talents with this university.”

David F. Levi, the Levi Family Professor of Law and Judicial Studies and Director of the Bolch Judicial Institute, described Duncan’s service to Duke as “unparalleled,” adding that she had recently accepted his invitation to join the institute’s new board. “She never says no,” said Levi, who served as dean of the Law School from 2007 to 2018 and presented Duncan with the 2016 Dean’s Achievement Award. Recalling the friendship and guidance she extended to him when he arrived at Duke after serving as Chief Judge of the U.S. District Court for the Eastern District of California, he praised her devotion to students and young lawyers as they sought to advance in their careers. Levi joked that her outreach to him in that regard could be relentless: “She is a truly tireless advocate for her law clerks. I am tired by her advocacy.”

Levi called Duncan “a towering figure in the rule-of-law space” internationally, evidenced by her recent election as vice president of the International Association of Judges. And in her judicial role, Duncan is “the epitome of the common law judge,” he said: “You approach it as a matter of professionalism and craft, you’re careful, you’re erudite, you’re fair, and you’re modest. And you see justice within the confines of those wise restraints that make us free.” Levi concluded by thanking her and her husband, former U.S. Magistrate Judge William Webb, for their establishment in June of the Judge Allyson K. Duncan Fund in support of legal writing at the Law School, observing that it was in keeping with her commitment and attention to careful research, scholarship, thinking, and writing.

For her part, Duncan expressed her deep gratitude and appreciation for the honor of hanging her portrait at Duke Law before its eventual relocation to the courthouse in Richmond, Va., where the Fourth Circuit is based. She said she hoped to convey “a sense of the surreal that my portrait is going to hang on a wall in this august building that I approached with trembling trepidation so many years ago.”

The portrait is by Gale Fulton Ross, who earlier painted one of Duncan’s mother, Anne, the longtime law librarian at NCCU Law School, that now hangs in that school’s law library. Having spent “a large part of my formative years” at NCCU Law School — her father was NCCU’s superintendent of buildings and grounds — Duncan said that becoming a lawyer was always her goal, and she looks forward to remaining engaged with societal challenges in her retirement, partly through her service at Duke Law.

“To have reached the point in my life when I can take all that I have learned and perhaps bring it to bear on the front end of problems is, to me, just the highest possible aspiration,” she said. “I can’t really say anything other than thank you.”