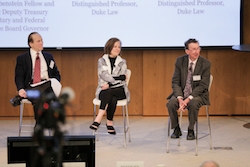 Corrupting incentives, lack of transparency, and a dispersed, siloed system of regulatory agencies contributed to the financial crisis of 2008-2009 and a trio of Duke Law financial experts cautioned that today’s highly deregulatory environment could contribute to the next crisis.

Rubenstein Fellow Sarah Bloom Raskin and Professors James Cox and Steven Schwarcz spoke on the legal and regulatory impact of the financial crisis during “Ten Years from the Bottom,” a conference held March 20 at Duke’s Fuqua School of Business to mark the low point of the worst stock market decline since the Great Depression. The interdisciplinary event was organized by the Law School’s Global Financial Markets Center (GFMC), which served as co-sponsor with the Duke Financial Economics Center, the Duke Center for Political Leadership, Innovation, and Service, and Duke Corporate Education.

Introducing the panel, GFMC Executive Director Lee Reiners recounted how, in the 17 months leading up to March 2009, the value of all U.S. stocks dropped from a peak of $22 trillion to $9 trillion, fueled in part by a decline in home prices, a sell-off of mortgage-backed securities, the failure of Lehman Brothers, and the near failure of several other large financial institutions, including Bear Stearns, Citigroup, and AIG. The escalating crisis led to emergency legislation to stabilize the nation’s financial system, the brief suspension of the 2008 presidential campaign, and the Dodd-Frank Wall Street Reform and Consumer Protection Act of 2010 (Dodd-Frank), a law that overhauled the nation’s financial regulatory agencies to ensure a similar crisis would not happen again.

Raskin, a former Federal Reserve Board governor who served as deputy treasury secretary for three years during the Obama administration, described the pre-crisis state of federal financial regulation as dispersed between agencies overseeing different financial sectors, such as the Federal Reserve System, the Securities and Exchange Commission, and the Federal Deposit Insurance Corporation. That lack of a central authority created silos that prevented regulators from understanding what was developing between them, Raskin said.

“This is a question of systemic risk. There was no single agency responsible for financial stability.”

Today, Raskin said, the Financial Stability Oversight Council established by Dodd-Frank convenes the heads of regulatory agencies to identify any emerging risks developing between the cracks of the agencies. And the Consumer Financial Protection Bureau (CFPB), also established by Dodd-Frank, has jurisdiction over banks, securities firms, mortgage servicers and other types of financial firms that serve consumers.

Home financing before the crisis was driven by government-sponsored enterprises (GSEs) Fannie Mae and Freddie Mac, along with the private mortgage market. The fact that it was assumed by market participants that the GSEs enjoyed the full faith and credit of the U.S. government skewed the agencies’ mortgage lending and underwriting, Raskin said.

"We had a chairman of the House Financial Services Committee who as a matter of political faith really believed in homeownership,” Cox said, referring to former Rep. Barney Frank, D-Mass. “So we got homeownership — and we got bankruptcies.”

Today, Raskin said, Fannie Mae and Freddie Mac remain under conservatorship, despite several attempts by Congress to take them out of government control.

Schwarcz, the Stanley A. Star Professor of Law & Business, noted that even before the crisis, most corporate lending did not come through banks but through capital markets. Wholesale funding markets weren’t well understood prior to the financial crisis and did not have a regulatory home, he said.

Securitization — the sale of packages of loans to investors — is often blamed, rightly or wrongly, for creating a moral hazard in that the lenders were not ultimately responsible for the creditworthiness of the loans, which meant that poor-quality loans were made, Schwarcz said. Unregulated institutions originated home loans, some of them risky, and packaged them as mortgage-backed securities.

And the fact that many securities that were highly rated by agencies such as Standard & Poor’s and Moody’s were later downgraded suggests that the ratings were inflated, the agencies underestimated how much the housing market could decline, or both, Schwarcz said.

“S&P ratings for these securitization transactions pre-crisis, especially those backed by mortgage loans, assumed the housing market could decline by as much as 20 percent. Ultimately the housing market declined by 30 percent, more than during the Great Depression, and one would question whether you ever could predict something like that.

“That does call into question a number of things,” he said, “such as, why didn't the investors who ultimately took the risk engage in due diligence, and why didn’t the insurance companies that insured many of these deals adequately assess the risk?”

Consequences of the financial crisis included a loss of faith in credit ratings, mortgage-backed and other types of debt securities, and even the commercial paper funding market — short-term promissory notes issued by companies to fund themselves, Schwarcz said. This loss of capital market funding made it hard for companies to borrow, he observed, reinforcing the economic collapse.

Cox voiced concern over a recent increase in corporate lending through the private sector, funded by asset-backed securities of unknown composition.

“What keeps me awake at night is not knowing what’s happening out there and the degree of leverage that’s going on,” he said. “We know that huge amounts of corporate lending are going through the private sector, and the private markets, by definition, are not very transparent. And they have grown substantially since 2010.

“We’ve actually done things that made the private market even bigger. So if the economy is slowing down, or even if the economy doesn’t slow down, we’re really going to have a problem.”

Asked to identify the most important change that has occurred since the crisis, Schwarcz said the Dodd-Frank Act made some improvements but weakened Federal Reserve Act Section 13(3), which allows the Federal Reserve to step in as a lender of last resort to financial institutions. “This means that the Fed is not going to have the authority to step in if there is another crisis,” he said.

Over the past two years the Trump administration has moved to weaken Dodd-Frank regulations, and in April the Federal Reserve Board proposed further rollbacks. While Raskin observed that firms now appear to be taking internal controls and risk management more seriously than they did prior to the financial crisis, she expressed concern over the economy’s ability to recover quickly — describing the desired “V-shape downturn,” in which there is a downturn followed by a sharp bounce back — in the face of a major shock, such as a cyberattack that freezes liquidity.

“When you have a long-term downturn, expectations change,” she said. “Behaviors change. There are huge costs and damage done. So we want any downturn to be short-lived. How can we build resilience, that bounce-back? How do we ensure that it is going to be short? We are taking off a lot of the guardrails from a financial regulatory perspective."