Dean Abrams charged the next generation of women leaders in law with continuing the progress toward gender equality that started with the ratification of the 19th Amendment. 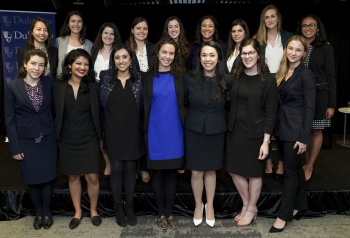 This year, for the first time ever, the editors-in-chief of the Top 16 law schools' law reviews are all women

Opening a remarkable conference she described as a “love letter” to future women lawyers, Duke Law School Dean Kerry Abrams praised the editors-in-chief of 16 top law journals who had initiated the event and charged them with carrying on work to advance women’s rights that was begun 100 years ago.

“It is you, the students, who are our future,” Abrams said in her opening remarks at the “Honoring Women’s Advancement in Law” conference held Feb. 3 at the Duke in DC offices. “In the next 50 years, it is you who will decide the jurisprudence of gender equality. So this event is our love letter to you. It reflects both our pride in your achievements and our hope for what you will do.”

The daylong event marked a singular achievement: On the centennial of the ratification of 19th Amendment, women occupy the editor-in-chief slot, a prestigious peer-selected leadership position, of the flagship law journals at the 16 top-ranked law schools in America. All but one of the women attended the conference, which was packed with distinguished speakers including feminist icon and Supreme Court Justice Ruth Bader Ginsburg, an early architect of litigation challenging gender discrimination. (Read The Washington Post's story.)

“It’s not just an honor but a great responsibility to be the EIC of a law review,” Abrams said. “For all 16 of these schools to have chosen women is a really unusual and special occasion. But it’s not an accident. The 19th Amendment put into motion the right for women to vote, to serve on juries, to run for office and it created the progress that has led to the circumstances that we now have today.”

To commemorate the historical moment, the 16 EICs also collaborated on a special joint publication called Women & Law, a collection of 14 essays by prominent women in the legal community, including Abrams, the James B. Duke and Benjamin N. Duke Dean of the School of Law and professor of law, who contributed an essay titled “Family, Gender, and Leadership in the Legal Profession.” The idea for the joint journal was conceived by Duke Law Journal editor-in-chief Farrah Bara ’20, and championed by Professor Marin K. Levy, after watching women sweep the top 16 schools’ law review elections last January – a watershed moment that will not be repeated at the end of their terms this semester.

“At the time that our journals were created, they were run entirely by men,” said Bara. “This event celebrates the fact that at least that much has changed.”

“But it’s also not a secret that a lot of us sit on top of mastheads that are deeply unbalanced in terms of race, gender, and ethnicity, that a lot of us have had elections for next year already, and that our successors will be white males. So while we have achieved a significant milestone, it’s clear that there is still a lot of work that remains. What we need are continuing and consistent efforts.”

Bara moderated a panel discussion with four of her fellow editors-in-chief on the challenges they faced in overcoming stereotypes of law review leadership, comparisons to previous editors, differing communication and leadership styles between men and women, and gender-based expectations.

Said Bara: “This job is a lot about giving, but if you’re too much of a giver it may be associated with your role as a woman as opposed to your role as a leader and that is a tension I’ve seen.”

Those expectations are amplified for women of color, some of the panelists noted.

“Finding that balance of making myself available without having all of my time taken up with mentorship conversations, or just the additional uncompensated labor that people expect from women and from women of color was a very difficult balance,” said Noor-ul-ain Hasan, who heads the California Law Review.

Gabriella Ravida, editor-in-chief of the University of Pennsylvania Law Review, noted that she is only the second African-American woman to hold that post in the journal’s 169-year history.

“While this celebration felt so momentous and wonderful, with it came this responsibility of making sure that this door can continue to open the same way for people like me. What can we do to challenge the status quo and use this moment to do that? What better time to ring the alarm for other women to something similar?”

The other four panels were packed with prominent jurists, practitioners, legal scholars, and members of the academy, including nine law school deans.

Panelists included Catharine MacKinnon, visiting professor of law at Harvard Law School and feminist legal scholar whom Abrams credited with conceiving the concept of sexual harassment; Judy Perry Martinez, president of the American Bar Association; Neal Katyal, partner at Hogan Lovells, and former acting solicitor general; and a panel of federal jurists that included Justice Ginsburg, who argued six landmark cases against gender discrimination before the U.S. Supreme Court and served on the U.S. Court of Appeals for the D.C. Circuit before she was appointed to the Court in 1993.

Justice Ginsburg called the women’s EIC sweep “a good beginning,” and recounted how, when she entered Harvard Law School in 1956, the law review included only two women.

“I have a picture of my second year and it shows all these men – and two small women in the crowd. It’s an enormous change to see women in numbers on law reviews and heading law reviews. It’s one of the things that makes me optimistic about the future.”

“It’s hard to be what you can’t see,” Srinivasan said, recounting his path from becoming a U.S. citizen at age 23 to federal judge at age 46. “And when you see it, you feel that you can be it.” He credited Justice Sandra Day O’Connor, the first woman appointed to the U.S. Supreme Court, with helping him overcome “impostor syndrome” as a clerk. He said that in hiring, “I’m cognizant of getting a mix of people who are going to challenge each other.”

Harris said that sitting alongside male colleagues on the bench has helped educate them on how even women at the highest levels of achievement are sometimes treated as inferiors.

“[They’ve] seen me be treated differently because I’m a woman,” Harris said. “And it’s important to me that they see it because it’s a surprise to them, sometimes, to see that we’re not always entitled to the same presumption of competence. And it has changed the way they might understand what is a credible or plausible claim of sex discrimination.”

Justice Ginsburg noted that last year was the first time the Supreme Court had equal numbers of male and female law clerks and praised Justice Brett Kavanaugh for hiring an all-woman crew.

When she was seeking a clerkship as a new law school graduate and young parent, she recalled, “there were precious few who would take a chance on a woman. No one would take a chance on the mother of a four-year-old. Now it’s not at all unusual for law clerks to be parents, both women and men. And my colleagues have seen that they can do the job perfectly well. That change has been important.”

Capping off the day, Justice Ginsburg marveled at the range of careers, including entrepreneurship, that are now open to women with law degrees, including her own granddaughter, who graduated from Harvard Law School three years ago.

The “Honoring Women’s Advancement in Law” conference was sponsored by Duke’s Program in Public Law. 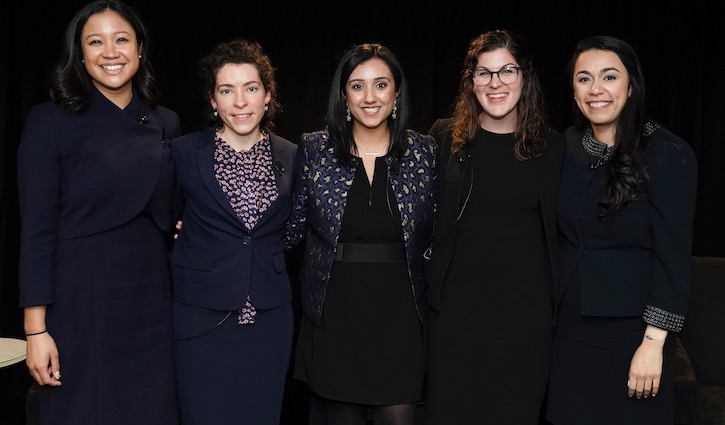 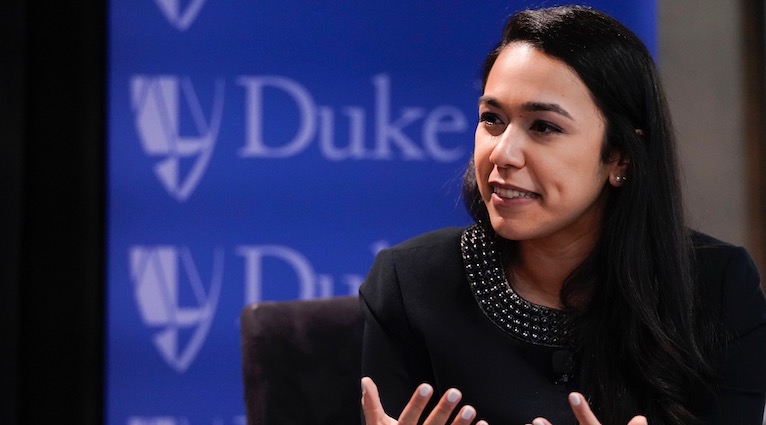 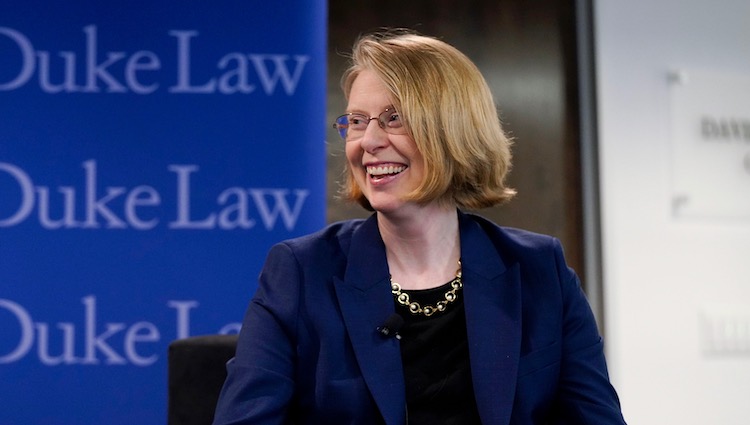 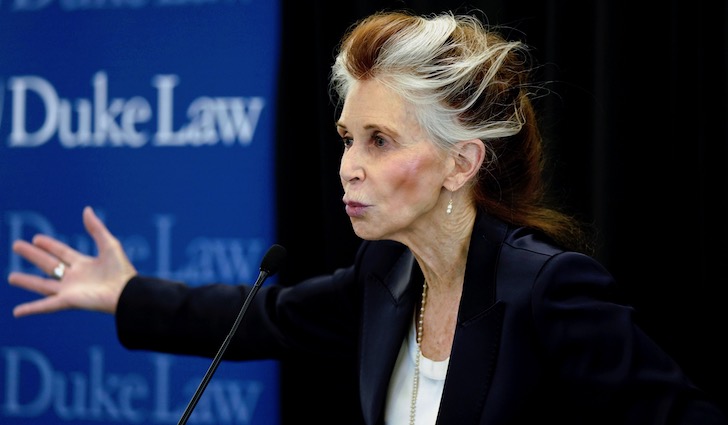 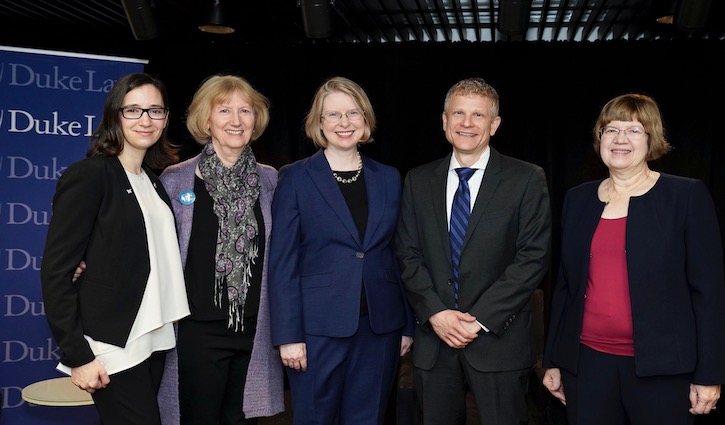 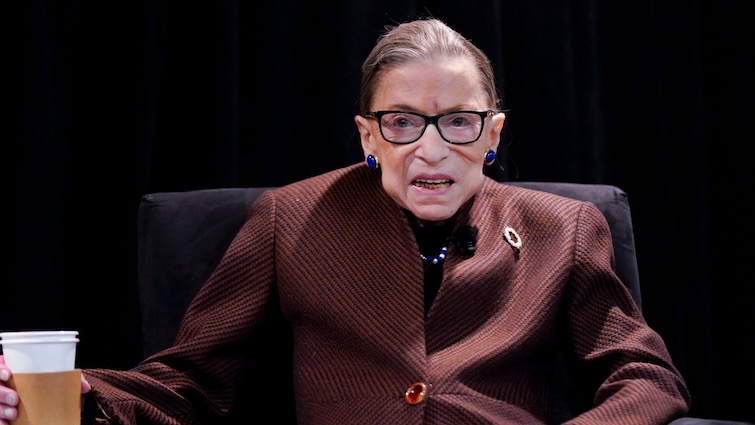 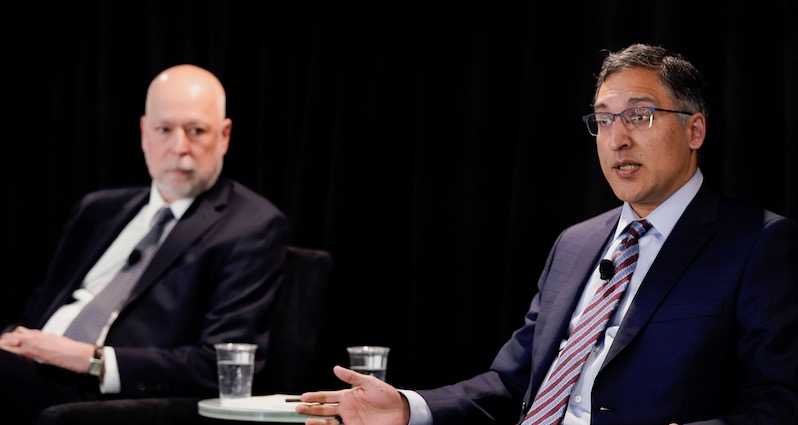 Adam Liptak, legal correspondent for the New York Times, and Neal Katyal, partner at Hogan Lovells, on the practitioners panel 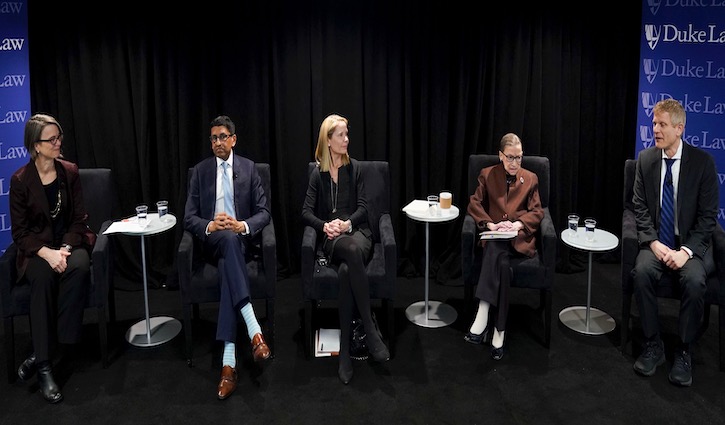 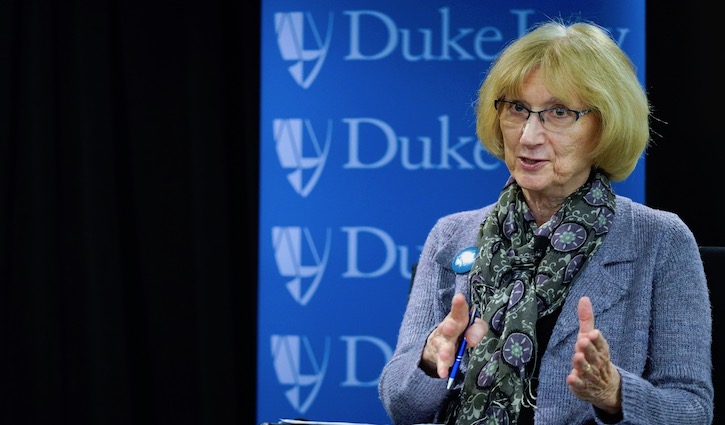 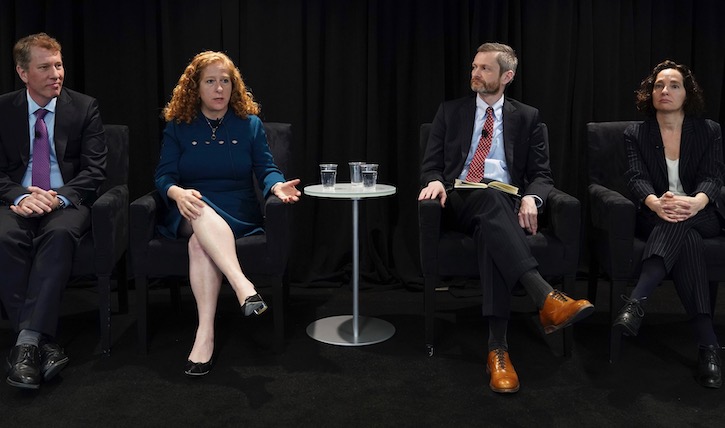 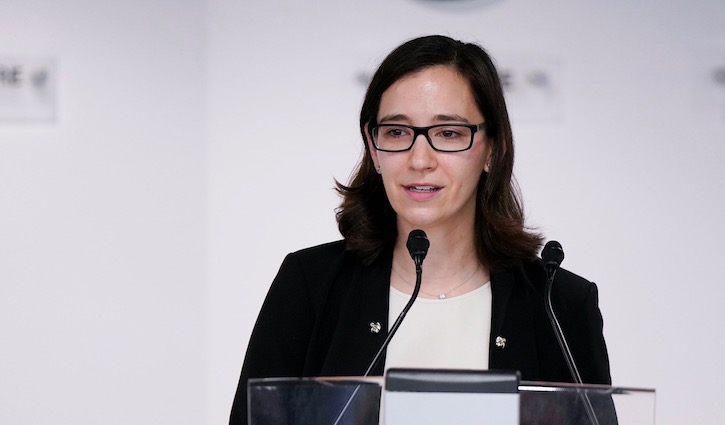 Prof. Marin K. Levy tells the gathering, “There is certainly more glass yet to be shattered, but I see a whole lot of hammers out there.” 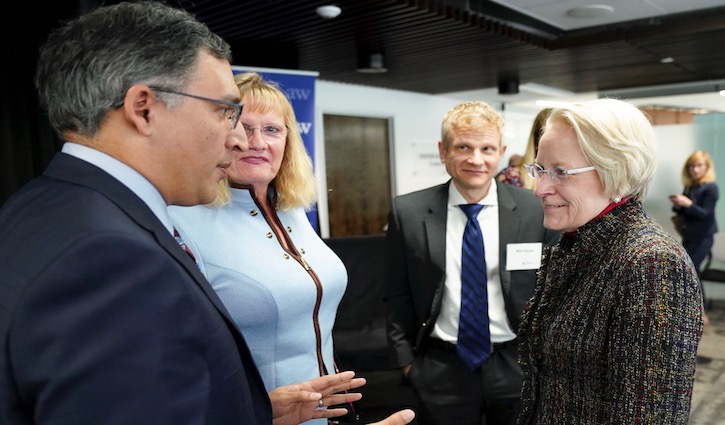