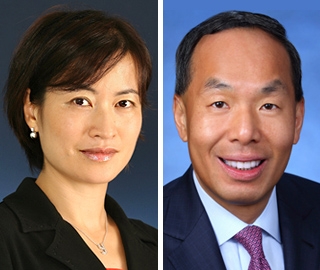 Duke Law School has received a $1.25 million commitment from Yibing Mao ’89, P ’11 and David Zhang of Hong Kong, the largest-ever gift to the Law School by a donor outside the United States.

“Our family has benefitted greatly from our education and our experience at Duke,” said Mao. “David and I were both very inspired by the matching program and we also thought it was a very worthy cause for us to support.”

Mao and Zhang are long-time philanthropic supporters of Duke University. The couple has made gifts in support of student scholarships and annual funds at schools across Duke. Their son, Alexander, earned his bachelor’s degree from Duke in 2011.

“In our heart, Duke obviously occupies a very central place, not just in Yibing’s career but also in our son’s,” said Zhang. “This gift is a gesture on our part to give back to Duke and hopefully Duke can continue its engagement with China and promote greater interaction between the two countries.”

Mao, a member of the the Law School’s Board of Visitors and Global Leaders Scholarship Program selection committee, is the general counsel and senior vice president of asset management and owner relations for Marriott International. She joined Marriott in 1996 following five years in private practice with McGuire Woods, Slaughter and May, and Milbank, Tweed, Hadley & McCloy LLP, respectively. Mao earned her JD from Duke in 1989. In addition, she earned an LLM from Peking University and an undergraduate degree from Jilin University.

Zhang is the senior corporate partner in the Hong Kong office of Kirkland & Ellis LLP. His practice focuses on securities offerings and mergers and acquisitions, mostly involving Chinese companies. He has also represented private equity funds, multinational corporations, and sovereign wealth funds in connection with transactions in China and parts of Southeast Asia. In 2014, Zhang was named the International Deal Maker of the Year by China Law & Practice. Zhang graduated from Tulane University Law School and Beijing Foreign Languages Institute.

“Duke Law School is extremely grateful to Yibing Mao and David Zhang for endowing this new professorship and to The Duke Endowment for matching their generous commitment,” said Dean David F. Levi. “Donor support is critical to maintaining and growing our outstanding faculty, and we are thrilled that such support is increasingly coming from around the world. We are also excited to see donors responding to the opportunity to have their gift matched through the Duke Law Faculty Endowment Challenge.”

The commitment also advances the University’s $3.25 billion Duke Forward fundraising campaign. The campaign, which will conclude in June 2017, supports priorities across Duke's 10 schools, Duke Medicine and a range of university programs and initiatives. To date, Duke Law has raised over $100 million in the campaign in support of its faculty, students, and programs.