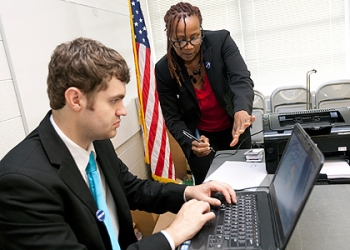 Duke Law students provided volunteer assistance, legal and otherwise, to homeless and under-resourced veterans on Sept. 20 at the 2013 Bull City Stand Down.  They were led and trained by Kim Burrucker, the director of Public Interest and Pro Bono at the Law School, who was also one of the principal organizers of the city-wide event that offers veterans in need access to health care, legal aid, information on transitional housing and job training, and basic necessities.

“And that’s a low number, we know that many of them slipped through the cracks and were unregistered,” she said. About 13 percent of the national adult homeless population are veterans, according to the National Coalition for Homeless Veterans.

The Durham VA Medical Center, CAARE Inc., the Bull City Support Network, the Duke University School of Nursing, North Carolina Central, the Durham Area Transit Authority, and numerous church groups, including the Baptist State Convention of North Carolina, were among the many groups providing volunteers, goods, services, and transportation to assist veterans at the 2013 BCSD. Last year over 4,000 volunteers, vendors, and staff manned the event.

“Our students took part in two different programs,” she said. “A group of them helped veterans get their DD-214, which some people call the ‘Veterans Bible.’ It’s an essential piece of paper that tells branch of service, dates of service, and type of discharge, which determines which veterans are eligible for which benefits. Without the document, veterans are unable to access benefits.  We get the process started online, right there on the spot. Once that’s done, we have a tracking number that we give to the veteran and also to the Durham County Veteran’s Service Office, so that they can get through the system quickly.

“Another group of students did reentry work and expungements of veterans’ criminal records. They search legal records and help figure out a path for expungement for veterans have that legal need. And a number of students volunteered in non-legal roles, which happened last year as well. They just want to help.”

Nick Atallah ’14 was among the law school volunteers entering information collected from veterans into a laptop to begin the DD-214 process. He helped Barry Burnette, an Army veteran who served from 1979 until 1982, start the process of getting another copy of the vital document.

“I need it because it proves that I’m eligible for various health benefits that I need,” Burnette said. “I only have part-time work and no health care coverage, so I need what the VA can give me.”

The veteran, who is a bus driver for the YMCA when he can get the work, said he has been coming to the stand down for several years.

“It helps us a whole lot,” he said. “I have some health issues, and I didn’t actually know that I had so many health care options until the first time I came to the stand down. I would never have pursued those options. And there are more services available every year. This year they have the dental care bus for the first time, and all you have to do is look at the size of the line in front of that bus to see how much we need that kind of help.”

Whitney Bosworth ’14, one of the student directors of the VDAP program was on hand to help veterans for her third year running.

“I got involved as a 1L when I was looking at various programs in the Law School, and because my boyfriend was stationed in Afghanistan at the time, and a lot of friends have served, it seemed like a natural fit,” she said. “What has been remarkable is seeing how much this event has grown just in the last three years. It seems like what used to be a number of disconnected groups with similar missions are turning into a network of services that we can offer to these veterans.” 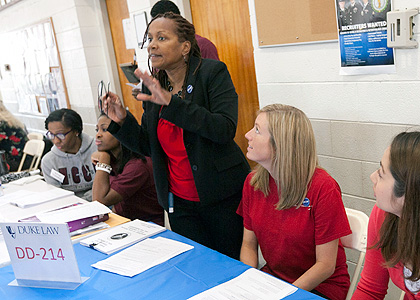 A range of other legal services were available at the stand down as well, Burrucker said.

“There’s an ‘ask a lawyer’ table staffed by a couple of area attorneys. NCCU had an information table and people from their Veterans Law Clinic worked with veterans. Legal Aid of North Carolina talked about discharge upgrades, custody and child support issues, all kinds of civil legal matters."

They also received basic necessities such as food, clothing, and access to showers and haircuts. Veterans lined up in front of a tent where they received rucksacks they could fill with shoes, socks, t-shirts, pants, and toiletries.

Burrucker was initially involved in the Bull City Stand Down as a coordinator for Duke Law’s pro bono efforts, and has served as one of its three main organizers for the past three years.

“It is a wonderful opportunity for our students to help people who really need it, and it is something to which our whole community can contribute,” she said. “I also feel strongly about it on a personal level. I never served, but my family has a strong tradition of service. My father served in Korea, my father-in-law is an original Tuskegee Airman, my daughter served in Iraq, and her husband has completed three tours in Iraq and one in Afghanistan.

“So it’s something I care deeply about, in part because I know that this event really helps people. We have a volunteer this year who came to us as a homeless veteran last year. She ended up with a job and a home out of this event, and now she’s volunteering to help other veterans.”