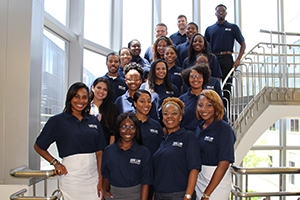 The Law School welcomed its first cohort of PreLaw Fellows this past June.

Twenty rising juniors from eight colleges and universities in Georgia and the Carolinas spent two weeks in residence at Duke, taking classes in criminal law, legal writing and analysis, and LSAT preparation, and gaining insight and advice on applying for and succeeding in law school.

The goal of the full-scholarship “pipeline” program is to introduce students from underrepresented communities to the rigors of law school and the benefits of having a legal education, as well as to ensure they have essential information to help them navigate the admissions process, said Ebony Bryant, director of diversity initiatives at Duke Law. “I had worked in law school admissions for 10 years and saw some of the struggles that some first-generation or minority students had in applying late or in lacking the information they needed to get into a school like Duke Law,” she said. “They often ‘come into the game’ late, so they’re too late to qualify for scholarships. They need to know at least two years out what they need to improve on, how much money to save, and which courses to take to help them with reading comprehension.

“One of my biggest professional goals is making sure students, regardless of their background, the school they went to, how they started in life, that they could go to the law school of their choice,” she said.

Admission to the program mirrored the law school application process. Applicants were selected based on transcripts, recommendation letters, Skype interviews, and writing samples. “Writing is so important to success in law school and as a lawyer,” said Bryant. “We wanted to make sure we were admitting the best students from each school.”

Students spent four days each week immersed in doctrinal courses — Criminal Law with James Coleman, the John S. Bradway Professor of the Practice of Law, and Legal Writing and Analysis with Clinical Professor Rebecca Rich. They received the same books first-year law students use for those classes and experienced similarly rigorous expectations and instruction. Each produced a capstone paper and made a presentation in Criminal Law.

“Professor Coleman gave us an assignment in which we had to pair up with another fellow and explain why a specific case decision should remain or why it should be overturned,” said Kourtney Johnson, a political science and economics major from Spelman College in Atlanta. “We had to rely on the cases that we read throughout the program in order to back up our arguments.”

“As I had hoped, the students were eager to learn, very engaged, and very opinionated!” said Coleman, who called the fellowship program "an excellent introduction" to studying the law. “I love teaching and interacting with students at the very beginning of their journey to become lawyers,” he said. “They learned that having an opinion was very different than having an informed opinion. By the end of the two weeks, they had worked hard to make sure that their still strong opinions were informed by the cases they read and our classroom discussions.”

Fridays were dedicated to LSAT preparation, professional development, and “Real Talk” sessions with Duke Law administrators. Lewis Hutchison, assistant dean for student affairs, discussed the transition from undergrad to law school, Tia Barnes ‘03, assistant dean for academic affairs, provided them with tips on how to succeed in the classroom, and Bryant offered advice on the admissions process. They also met Duke Law alumni, visited a local firm, and went on a tour of the State House of Representatives in Raleigh. “The main reason why we went to the State House was to show them this is where you could be,” Bryant said. “Part of access is allowing people to see themselves in a place.”

David Duncan, a psychology major from Elon University, said he enjoyed the opportunity to connect with legal professionals. “This glimpse into a law career was invaluable to my future success as a lawyer."

Malik Wilson, a sociology major at Morehouse College in Atlanta, said the fellowship program gave him a clear sense of what he needs to do to achieve his goal of studying law. His “amazing” professors confirmed his interest in doing so, he added. “Professor Coleman’s level of experience and knowledge are truly unmatched making learning in his Criminal Law class an adventure every single day,” he said. “Likewise, Professor Rich’s tips and tricks regarding legal writing were invaluable.”

Bryant said she was impressed with the inaugural class of fellows. “Now they can envision what law school is and they can make a clearer decision based on the time they spent here,” she said. “That’s what it’s all about — it’s giving someone the opportunity to make a good decision.”