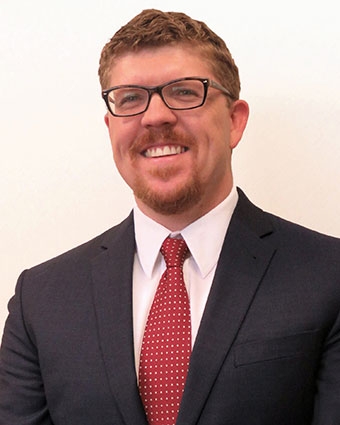 Shane Ellison, a veteran public interest immigration attorney and clinician, joined the Duke Law faculty in July as a senior lecturing fellow and supervising attorney in the Immigrant Rights Clinic.

Ellison previously directed Creighton Law School’s Immigrant and Refugee Clinic. That clinic is operated through a collaborative partnership with the Immigrant Legal Center (ILC) in Omaha, where Ellison served as legal director and lead attorney.

“I’ve had the pleasure of knowing Shane since I began practicing immigration law,” said Clinical Professor Kate Evans, who joined the Duke Law faculty in 2019 as clinic director after helping to launch immigration law clinics at the University of Idaho College of Law and University of Minnesota School of Law. “We’ve collaborated on a host of different cases over the years and I couldn’t be more pleased that he agreed to join Duke’s Immigrant Rights Clinic. Our students and clients will benefit from Shane’s national leadership in protecting the rights of asylum seekers, as well as his deep commitment to justice.”

Over more than nine years at ILC (formerly known as Justice For Our Neighbors), Ellison helped it grow from a four-employee organization to one of the largest nonprofit immigration law firms in the Midwest.

Ellison’s advocacy work contributed to the passage of legislative initiatives that significantly advanced immigrants’ rights in Nebraska. As manager of the impact litigation efforts of National Justice For Our Neighbors, he litigated complex immigration cases and represented immigrant rights organizations through amicus briefs before the Executive Office of Immigration Review and the Sixth, Eighth, and Ninth Circuit Courts of Appeals. He currently sits on the National Amicus Committee of the American Immigration Lawyers Association and assists in leading the association’s Asylum Litigation Working Group.

The Immigrant Rights Clinic, which welcomed its first class in January, engages students in the direct representation of immigrants and refugees facing deportation, as well as in policy advocacy and education. Ellison’s addition to the faculty will enable the clinic to expand its caseload, facilitating both an increase in critical experiential learning opportunities for students as well as enrollment. Ten students are now enrolled in the clinic and two from the inaugural class have returned as advanced clinic students for the fall semester.

In addition to their clinic teaching and oversight, Evans and Ellison are co-teaching Readings: Race and Immigration Enforcement. The course examines how immigration policy has been used to regulate race throughout U.S. history, with a preference for white, Northern European immigrants evident in even the earliest forms of U.S. immigration law.

“Her immigration law class and the political asylum clinic opened my eyes to injustices I had not been aware of, like the fact that there’s no right to appointed counsel in removal proceedings,” said Ellison, noting the labyrinthine complexity of immigration law. “Immigrants who can't afford an attorney and whose English is limited will have to represent themselves in immigration court, unless they're fortunate enough to get pro bono counsel, yet studies show that that odds of success dramatically improve when you have access to counsel.”

While at Hofstra, Ellison decided that immigration law afforded the potential for his legal training to make a “huge impact” on outcomes. He joined the U.S. Department of Homeland Security as an asylum officer in New York after his 2009 graduation on the encouragement of Wren, who called it a good opportunity to learn the internal workings of the government in adjudicating claims. That proved to be true, he said, adding that he regularly employs those insights as he navigates the system on behalf of immigrants and refugees.

But while it was gratifying to be in the position to grant safe haven to many refugees seeking asylum protection, “there were times when it didn't feel to me like the law was on the right side of an issue,” Ellison said. “It’s a better fit for me to be an advocate, trying to advance arguments that protect immigrants.”

Ellison was hired by ILC as legal director and lead attorney in February 2011, joining a new executive director and skeleton staff in rebuilding the organization after a period of turmoil. By the time he left in June, ILC had more than 45 employees, including 15 attorneys, all focused on serving the legal needs of low-income immigrant clients, including survivors of domestic violence, victims of human trafficking and other crimes, refugees, and abused, abandoned, and neglected immigrant children.

In addition to litigation, Ellison helped craft three bills, all signed into law, that expanded immigrant rights. Most recently, in 2018, he worked with ILC colleagues and a fellow immigration clinician from the Nebraska College of Law to draft a statute protecting the ability of abused, abandoned, and neglected immigrant children to secure the necessary state court order to seek Special Immigrant Juvenile status. Earlier legislative victories ensured that eligible youth within the Deferred Action for Childhood Arrivals program (DACA) can obtain a driver’s license — Nebraska was the last state to grant the so-called DREAMers that right in 2015 — and access, along with other qualified, work-authorized immigrants, to all professional and commercial licenses in the state.

Ellison discovered his love for teaching and mentoring students when ILC began partnering with Creighton Law School on an immigration clinic in 2017; he supervised students’ work on cases selected from ILC’s caseload. During a three-year pilot project Ellison served both as ILC’s legal director and clinic director, quickly getting a sense that clinical education produced “an almost multiplier effect” on how he could help clients by inspiring in his students an ethos to serve.

“I could be in the nonprofit world and do a lot of good work for immigrant clients who need legal services,” he said. “But there's this sense in which we're sort of leveraging or increasing impact with students who get excited about pro bono, nonprofit work.” Equally important: training and inspiring students bound for the private sector to choose immigration law as the focus of their pro bono practices.

“The partnerships between nonprofits and private firms is really, really key,” he said. “We’ve particularly seen that in the last several years of immigrant rights litigation, where these pro bono law firm partnerships with nonprofits have been formative in seeking to develop the law in a way that moves the needle in our clients’ favor through litigation.”

Ellison calls himself “absolutely delighted” at Duke Law and to be partnering with Evans, with whom he has worked on appellate litigation. “She's just a tremendous mentor and a tremendous teacher,” he said. “At Duke I see the opportunities for hopefully seeing even greater engagement of clinic alumni in their pro bono choices, whatever career paths they take. The impact of students coming from this caliber of institution is going to be greatly amplified and hopefully accomplish that big-picture goal of seeing immigrants’ rights advanced in the United States. It’s very exciting.”