Endowed chair honors a father and a legacy 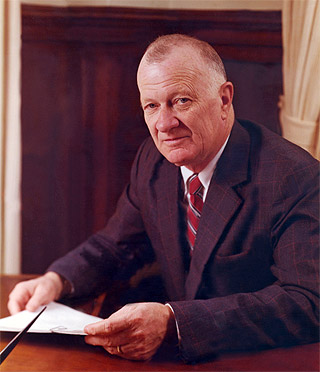 A gift to establish the Robert G. Seaks LLB’34 Professorship honors both the legacy of a distinguished graduate and the memory of a beloved father.

With his $1.25 million gift, Terry G. Seaks aims to ensure that his father’s distinguished life and accomplishments live in perpetuity at Duke Law School and to provide future students the same opportunity to learn from scholars of the highest order that his father had.

“This gift not only creates an important new faculty chair but also tangibly links our future with our history,” said Dean David F. Levi. “It is a wonderful commemoration of Terry Seaks’ generosity, of Robert Seaks’ distinguished life in the law, and of the Seaks family’s belief in the power of great teaching and learning.”

Seaks is the fourth donor to take advantage of a matching gift fund created in 2010 by Stanley ’61 and Elizabeth Star.  In doing so, Seaks joins one of the school’s most successful fundraising initiatives to date and fulfills the Stars’ goal of creating four new professorships. The gift also advances the Law School’s efforts to raise $85 million as part of the university-wide $3.25 billion Duke Forward fundraising campaign, which includes investing in core faculty among its priorities.

“The Seaks professorship is also a tribute to Stan and Elizabeth Star,” Levi said. “They chose to amplify their generosity by engaging and inspiring others. Four chairs later, we cannot thank them enough for their leadership and vision.”

A family devoted to education

Terry Seaks received his Ph.D. in economics from Duke in 1972 and is now professor of economics, emeritus, at the University of North Carolina at Greensboro. He has also endowed a distinguished professorship in companion animal medicine at the North Carolina State University College of Veterinary Medicine in honor of his late wife Jane Lewis Seaks. As lifelong students and teachers, both Terry and Jane, who earned her master of arts in teaching degree at Duke in 1973 and was a teacher for many years, valued excellent teaching and were devoted to supporting education.

“I’ve always felt that great professors are at the core of what makes a university great,” Seaks said. “I also know that it is an honor to carry a named professorship, so I am glad to provide the means by which Duke can continue to attract and reward wonderful scholars. Given dad’s remarkable record at Duke Law, I think it will make someone very proud to hold my father’s chair.”

Robert Seaks still holds the record for being the youngest Duke Law graduate to receive the Willis Smith Prize for the outstanding graduate in his class. When he graduated first in his class from Duke Law in 1934, he was only 21 years old; he had skipped three grades in primary school and graduated from high school as salutatorian at the age of 14. After graduating from Gettysburg College — with Phi Beta Kappa and class honors — he arrived at Duke Law at the age of 18. Youth did not inhibit his leadership abilities: He served as editor of the Duke Bar Association Journal (which later became the Duke Law Journal) and was elected to the Order of the Coif. A classmate described Seaks as “the glue that binds us together.”

Robert Seaks’ time in law school is meticulously recorded in letters he wrote to his family during his time at Duke Law. Terry has held tightly to the letters since his father’s death in 1992; they both illuminate his father’s lasting affection for Duke and offer a peek into a remarkably poised young man’s experience of “the grind,” as he put it.

The letters confirm that some things never change: “The citations are what hurts,” Robert writes as he explains his studies to his mother. He recounts football ups and downs (noting that Wallace Wade had been lured from Alabama to try to put Duke “on the football map”) and tales of professors who “start on the theory that law students are supermen and there are 40 hours in a day.” He describes the construction of Duke Chapel — “a most beautiful and impressive sight.”  And he expresses the admiration, mixed with terror, he felt for some of his professors, like the brilliant and demanding Professor Douglas B. Maggs.

Then there are stark reminders of the times, such as a comment about the closing of banks in his hometown of Harrisburg, Pa., or about getting used to eating just two meals a day. “They really are a fascinating window into law school and into life during the 1930s,” Terry said of the letters, copies of which are available to the public through the Goodson Law Library.

After law school, Robert Seaks worked for the Tennessee Valley Authority negotiating power contracts. He was a Sterling Fellow at Yale Law School and served as assistant to the chairman of the Federal Communications Commission and as special assistant to Attorney General Tom Clark in the U.S. Justice Department. For the last 30 years of his career, he practiced law with the top-notch Washington, D.C., firm of Wheeler & Wheeler — formed by Sen. Burton K. Wheeler and his son — where Seaks specialized in regulatory work representing radio and television stations and railroad and trucking firms.   He passed away in 1992, at the age of 79.

During World War II, Seaks served as a Navy code-breaker in Pearl Harbor alongside a young officer named John Paul Stevens. They both received Bronze Stars for their service; they also forged a lifelong friendship. When the now-retired Supreme Court Justice Stevens spoke at Duke Law’s hooding ceremony in 2012, he invited Terry Seaks to participate in the day’s events.

That was the connection that brought Seaks back to Duke and inspired him to move forward with his gift.

“Justice Stevens invited me to a luncheon here at Duke during the graduation events,” Seaks said. “When I walked into that room with the justice, whom I hadn’t seen in years, and 40 or 50 law faculty, I was just overwhelmed. And then to hear Justice Stevens talk about my dad in his remarks to the students — it was just an honor to be there.

“I feel blessed to have had such a remarkable father and to be able to honor him in this way,” Seaks added. “I am deeply proud of this chair and to know that dad’s name will be forever linked to the Law School he so loved.”