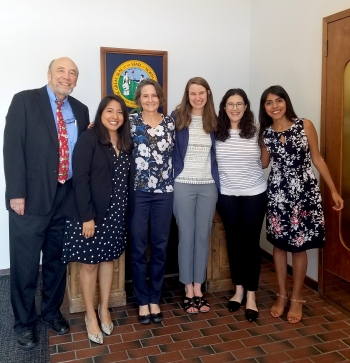 The North Carolina Commission for Public Health has adopted a new rule that requires the testing of drinking water for lead in licensed child care centers, relying in significant part on research and analysis conducted by students in the Duke Environmental Law and Policy Clinic on behalf of their client, nonprofit policy advocate NC Child.

The rule, which went into effect Oct. 1, will help ensure that more 230,000 children and babies attending about 4,600 child care facilities in the state are drinking water that is free from lead contamination. Lead exposure during early childhood has been linked to permanent negative health outcomes including lowered IQ, reduced cognitive function, aggressive behavior, and attention deficit disorder.

“This rule makes people aware of what’s in the water so that we can fix the problem,” said Dr. Nancy Lauer, the clinic’s science and policy fellow. “Children’s lead exposure is preventable. This is an important piece of the solution.”

Rashmi Joglekar, a PhD candidate at the Nicholas School who worked on the case as a Stanback Intern, noted the new rule will help protect children and infants at a critical stage. “We focused on child care centers because most of the children who attend them are below the age of 6,” she said. “That is a vulnerable neurodevelopmental period.”

Before implementation of the new rule, state regulations took a “canary in a coalmine” approach by testing children for lead already in their blood, said Clinical Professor Michelle Nowlin JD/MA ’92, the clinic co-director. “Under the earlier approach, a child had to be poisoned before the source of contamination was identified and mitigated,” she said.  “This regulatory gap may have resulted in the exposure of hundreds of children to lead, albeit at levels lower than the outdated statutory threshold for ‘poisoning.’ That highlighted a distinct need for focused regulatory attention on health standards as opposed to corrosion control. This rule helps close that gap.”

On behalf of NC Child, 15 students from the Law School and Nicholas School of the Environment worked in interdisciplinary teams to develop the rule in cooperation with the North Carolina Department of Health and Human Services, the North Carolina Licensed Child Care Association, and scientists at RTI International, a Durham-based nonprofit research institute. They identified the health-based need for a rule and gaps in regulatory coverage, researched possible approaches and mitigation strategies, drafted the proposed rule language and fiscal note, spoke at a public hearing, and submitted detailed comments in favor of the proposal.

Laura Appelt ’18, developed much of the initial strategic research for the rule, conducting an analysis of North Carolina law and examples from other states, and identifying the most effective and feasible strategies for moving forward. Appelt, now an associate at Ropes & Gray in Chicago, said she gained valuable experience conducting state-level research and examining the details of regulatory language. “It’s incredible to think that something I worked on as a student is now on the books in North Carolina,” she said.

The effort builds on earlier work by Duke Law students to help protect vulnerable populations in North Carolina from lead contamination. In 2017 clinic students advised NC Child, based on research and analysis of a phased approach for addressing lead exposure, in a successful effort to lower the blood-lead level at which the state takes action and provides Medicaid coverage for lead testing of pregnant women. They also submitted comments on North Carolina’s draft Early Childhood Action Plan, urging the state to address lead exposure and contamination. That resulted in the inclusion, in the final plan, of lead as a consideration relating to preventative health services and safe and secure housing goals.