The right of reporters to keep their sources confidential was at the heart of the federal investigation into the 2003 leak of CIA agent Valerie Plame’s identity to the press. Special Prosecutor Patrick Fitzgerald blanketed political reporters in Washington with grand jury subpoenas; Judith Miller of The New York Times spent 85 days in jail after refusing to disclose her source.

As the investigation into the Plame leak unfolded, Eric Lieberman ’91, then in-house counsel for The Washington Post, worked — successfully — to make sure that Post reporters maintained the promises of confidentiality made to their sources and avoided a confrontation with the federal courts and the special prosecutor. Eventually sources released the Post reporters to give deposition testimony about their conversations.

Lieberman, who became the Post’s vice president and general counsel on Sept. 1, says, “[I spend] much more time than I ever thought possible” dealing with subpoenas that seek to discover the identity of reporters’ confidential sources. He is working with other media organizations to press Congress for a “shield law” that would provide reporters with a qualified right not to identify confidential sources in federal court proceedings.

In 2002, Lieberman was involved in a precedent-setting case that established a qualified privilege for war correspondents called to testify before an international tribunal. The issue arose when the prosecutor at the Hague-based International Criminal Tribunal for the Former Yugoslavia summoned a former Post foreign correspondent to testify about a conversation that he had with an alleged war criminal while reporting on the Yugoslavian conflict in the early 1990s.

“No protection for reporters had been formally recognized by the tribunal,” Lieberman explains. “We argued that such a privilege was key to the safety of journalists who report in war zones — they could be in danger if they were seen as [non-neutral] potential witnesses in war crime prosecutions,” he recalls. “We also feared that if reporters could be routinely called to testify about what they saw in combat zones, they
would lose access to those areas, and the public would, ultimately, be less informed about important conflicts.”

The tribunal’s Appeals Chamber ultimately ruled that journalists who investigate or report on conflicts from inside the conflict zone cannot be subpoenaed unless the evidence is essential to determine a key issue in the case and cannot reasonably be obtained in another way.

In addition to reviewing Post articles prior to publication, Lieberman has also focused on helping journalists gain access to public records. “[That] is a challenge, no matter who’s in power,” he says. “Government is always a bit suspicious when the press starts requesting information from them. In this post-9/11 world, there’s a higher degree of concern about providing that information to the media, and there are obviously differences of opinion as to how valuable that transparency is.”

Earlier this year, Lieberman was involved with a nationwide test of access to public records. During “Sunshine Week,” testers approached government offices around the country requesting copies of local emergency response plans, which, according to federal law, should be public information. Only a handful of testers in Maryland were immediately able to review the documents. The results indicate a clear need to educate government employees and agencies about public records laws, says Lieberman, who also serves on the boards of the Maryland-Delaware-District of Columbia Press Association, the Virginia Press Association, and the Council for Court Excellence.

Lieberman snared a rare opening on the Post staff in 1998, moving from Williams & Connolly, where he had represented the newspaper as outside counsel on occasion. He describes himself and his two in-house colleagues as “generalists, who advise the advertising and circulation departments just as we advise the newsroom on issues related to content.” Though he originally planned on a career in labor law after working on Sen. Edward Kennedy’s Labor Committee staff following his Harvard graduation, Lieberman says he’s found his calling at the Post.

“It’s been much more than I expected in terms of job satisfaction. The work is as interesting as I thought it would be and the people, even better.” Particularly fun, says Lieberman, who lives in Bethesda, Md., with his wife Lauren, and their children, Sarah and Josh, is having an office two doors down from Post legend Ben Bradlee.

“He’s one of the most amazing people I’ve ever met — he has such energy and electricity about him, and a passion for good stories that’s really inspirational,” says Lieberman. Only one thing might be as much fun, adds the Durham native and diehard Duke basketball fan: getting such easy access to Coach K. —Debbie Selinsky 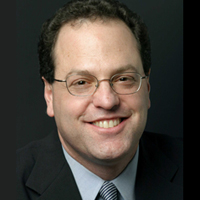 Though he originally planned on a career in labor law, Eric Lieberman '91 says that he's found his calling at the Washington Post.