“I think U.S. resistance to certain treaties had to do with the cold war and a desire not to cede any authority, but there are also facets of the U.S. constitutional system — a heavy emphasis on freedom of speech and federalism, for instance — that make it hard to sign on to certain treaties, at least without reservations,” Bradley said. “We had a very frank and vigorous discussion about those issues after the lecture, and over the course of the time I spent with the academics from the university.”

Another lecture on U.S. views on the International Criminal Court sounded familiar themes for his Chinese audience, Bradley noted. “It was a very different kind of lecture, because the U.S. and China are in exactly the same position with relation to the ICC. They are two of the seven nations who have voted against joining the court, and both of them have done so because of sovereignty concerns.”

Professors Jerome Reichman and Jonathan Wiener each took part in scholarly exchanges in October. Reichman, the Bunyan S. Womble Professor of Law, attended the Beijing meeting of the China Task Force, sponsored by the Institute for Policy Dialogue at Columbia University. Headed by Nobel-prize-winning economist Joseph Stiglitz, the ongoing multidisciplinary initiative brings together law professors and economists to analyze regulation in China after the financial crisis.

Reichman presented his paper, “Intellectual Property in the 21st Century: Will Developing Countries Lead or Follow?” as part of a discussion of issues relating to the regulation of intellectual property within China’s nascent innovation system. » See the full schedule here.

Wiener, the William R. and Thomas L. Perkins Professor of Law and professor of environmental policy and public policy at Duke, participated in several conferences in discussing risk management in an increasingly international and interconnected world. His talks outlined the sorts of multiple, simultaneous risks that confront the global community — such as climate change, disease, natural disasters, food safety, financial crises, terrorism — and the organizational structures and policies in place or needed to better manage these risks.

His presentation at Peking University Law School, “Risk Regulation: Law and Governance in a Multirisk World,” will be published, in both Chinese and English, in the PKU Law Review.

Wiener offered welcoming remarks and the keynote address at an international conference on Risk Analysis and Crisis Response (RACR), sponsored by the Risk Analysis Council of China. His address, “Precaution and Oversight in a World of Multiple Risks,” announced the official launch of the new China group of the Society for Risk Analysis (SRA), for which Weiner recently concluded a term as president.

He also chaired the conference’s summit of risk leaders, at which the presidents of the SRA regions from around the world, including North America, China, Japan, Europe, Australia/New Zealand, and an interest group from Korea agreed to the “Beijing Declaration,” a framework for collaboration in promoting excellence in global risk analysis.. The conference’s proceedings will be published in a volume, New Perspectives on Risk Analysis and Crisis Response, Proceedings of RACR-2009, the Second International Conference on Risk Analysis and Crisis Response (New York & Paris: Atlantis Press, 2009), for which Wiener serves as one of three editors.

At the Chinese Academy of Sciences Institute of Policy and Management Sciences, Wiener spoke on “Risk Management in a Multirisk World.” And while in Beijing, he met with several Duke Law alumni, including Dai Xin ’09, Li Yongyi ’07, Hou Dongfang LLM ’09, and Wang Jianbin LLM ’09.

“Our faculty are highly engaged in a variety of global activities,” says Judith Horowitz, associate dean for international studies. “At any given time, someone is speaking at a conference abroad, advising the government of another country, or participating in international policy discussions. China in particular is developing policies and programs that are in position to benefit from the research and knowledge of our faculty, and it is exciting to see Duke Law faculty and alumni involved in the country’s growth.”

Read more about Duke Law faculty and alumni in China here, here, and in the Fall 2008 edition of the Duke Environmental Law newsletter, which can be downloaded here. Faculty scholarship relating to China can be found through a simple search for “China” in the Duke Law Scholarship Repository. 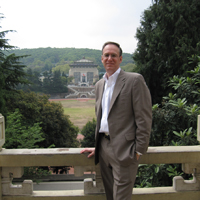