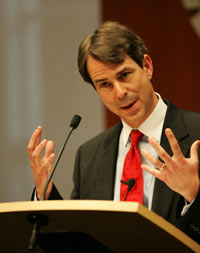 John Bellinger III, legal adviser to the secretary of state, addressed differences in transatlantic approaches to international law and institutions when he spoke at Duke Law School, November 15, as the Center for International and Comparative Law’s inaugural lecturer. Contrary to “cartoonish” characterizations, many arising from the contentious issues of counterterrorism law and policy, Bellinger argued that the seriousness with which the United States takes international law is reflected in its approach to its making and respect for its resulting obligations, and in its record of leadership on issues where international action is required.

The United States and some of its European allies do have substantive, interpretive, institutional, and philosophical differences regarding international law, said Bellinger, who advises Secretary of State Condoleezza Rice and the White House on matters relating to international law, but share long-standing traditions of rule of law and respect for law, and a network of binding treaties, institutions, and regimes which facilitate daily transnational cooperation.

“Failure to join a treaty regime should not be equated with a lack of respect for international law, nor should it be viewed as a lack of concern for the underlying substantive issues,” he said, lamenting the “international drubbing” the United States has taken for failing to sign on to such agreements as the UNESCO Cultural Diversity Convention, the U.N. Disability Treaty, and the International Criminal Court (ICC). The United States takes a pragmatic approach to international agreements, he said, only joining those which it can clearly implement and with which it can comply.

John Bellinger III, legal adviser to the secretary of state, praised Duke’s launch of the Center for International and Comparative Law as an essential affirmation that those subjects are key to legal curricula.

"To make clear its relevance to all facets of legal training, these disciplines must incorporate the rigor, creativity, and focus that we see in our domestic subjects," Bellinger said, offering the scholarship of Center Director Curtis Bradley, Richard and Marcy Horvitz Professor of Law, "as a wonderful example of how to integrate the international and foreign law with the study of the U.S. Constitution and federal courts system."

“Contrast this with many countries that join first and tackle implementation later, and approach particularly common in the fields of international environmental and human rights law, and the result is that the United States can look like a laggard or a malingerer in these important areas, reluctant to make an international commitment. Ironically, in some instances we take a bigger reputational hit than those countries that join but then utterly fail to comply.”

An important set of differences arises out of the relationships between international and domestic legal systems, said Bellinger, raising the controversy over the United State’s decision not to join the ICC. “The story is sometimes framed as that of a superpower, unwilling to accept any fetters on its freedom to act, contrasted to the Europeans who, as better international citizens, are more willing to abide by international rules and submit their issues to international adjudication.” This disregards both the domestic debate as to whether the U.S. government has the authority to delegate to international tribunals the power to decide questions of international law that would have direct effect on U.S. law, as well as the fact that the ICC is based on a system of complementarity.

“We share [with ICC member states] commitment to ensuring accountability for genocide, for war crimes, and for crimes against humanity. What we disagree with is the ICC’s method for achieving accountability.” From the U.S. perspective, he said, the ICC prosecutor’s power to initiate cases without appropriate oversight by the U.N. Security Council creates an undue risk of politicizing prosecutions, putting U.S. personnel deployed around the world on peacekeeping missions particularly at risk. The U.S. has no “gap in values” with the Europeans, said Bellinger, but came to a different policy result after weighing the same principles and considerations.

“We were deeply concerned about good process, institutional design, and the principle of political accountability. Our decision was in no way a vote for impugnity. We were confident that our domestic system was capable of prosecuting and punishing our citizens for these crimes.”

Issues relating to counterterrorism laws and policies, particularly those relating to the detention, questioning, and transfer of members of al Qaeda and the Taliban have given rise to erroneous presumptions, “the product of faulty premises or shoddy analyses,” said Bellinger. “Often what is billed as a legal difference is really a difference in policy.” A particularly frustrating case in point is the image of the United States as being in violation of the laws of war or international humanitarian law in its refusal to grant POW status to combatants detained in Afghanistan following 9-11, he said.

“POW status can be seen as an incentive to follow the rules,” Bellinger said, arguing that in failing to carry their arms openly, wear uniforms recognizable at a distance or respect the laws and customs of war Taliban fighters did not meet the requirements of the Geneva Conventions. “Weaken that incentive, and the losers will not only be our own soldiers but civilians who bear the brunt of suffering when unlawful combatants operate surreptitiously within the general population.” He expressed confidence that criticism of the U.S. decision to try enemy combatants before military commissions will subside when the international community sees how the recently signed Military Commissions Act works in practice.

“All of these areas of legal controversy underscore the timeliness of creating a center devoted to international and comparative law,” said Bellinger, who urged Duke law students to consider careers in those fields.