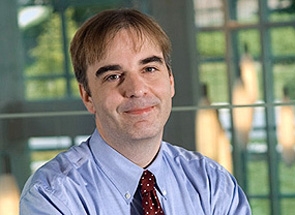 The issue of same-sex marriage is popularly seen as one that breaks along liberal and conservative lines. But don’t suggest to Professor Ernest Young that there’s something ironic about conservative legal scholars lining up against laws prohibiting gay marriage.

“How is that ironic?” asks Young, who co-authored the Brief of Federalism Scholars filed with the Supreme Court in United States v. Windsor, which urged the justices to strike down the Defense of Marriage Act, or DOMA. He points out that President Bill Clinton signed DOMA into law, and that President Barack Obama didn’t come out in favor of gay marriage until the day after North Carolina passed a bitterly contested anti-gay marriage constitutional amendment.

“Neither party has been particularly good on this issue, but both parties include people, like Justice [Anthony] Kennedy, who have taken courageous stands for equality,” says Young, the Alston & Bird Professor of Law, and a past recipient of the Federalist Society’s Paul M. Bator Award.

In a majority opinion authored by Justice Kennedy and joined by Justices Ginsburg, Breyer, Sotomayor, and Kagan, the Court, in Windsor, struck down DOMA, one of the last rulings of the 2012-2013 term. Although Kennedy ultimately relied on the Due Process Clause of the Fifth Amendment for doing so, he emphasized the primary role of state law in defining who can marry. And he cited the Brief of Federalism Scholars in agreeing that DOMA imposed numerous hardships on same-sex couples who are legally married under state law: “Under DOMA, same-sex married couples have their lives burdened, by reason of government decree, in visible and public ways,” he wrote. “By its great reach, DOMA touches many aspects of married and family life, from the mundane to the profound.”

Young wrote the brief with three attorneys at Robbins, Russell, Englert, Orseck, Untereiner & Sauber in Washington: partner Roy Englert Jr., a leading Supreme Court advocate, and associates Erin Blondel ’09 and Carina Cuellar. They argue that DOMA, which Congress passed in 1996, was an unreasonable federal imposition on police powers traditionally reserved to the states. They note that nine states plus the District of Columbia issue same-sex marriage licenses, and another 12 confer a variety of more limited recognitions, and that a slight majority of Americans now approve of same-sex marriage.

These evolving social attitudes, the authors contended, represent the kind of incremental approach that the Framers of the Constitution intended the federal system to enable. “The Framers designed the federal system to allow States [the] freedom to experiment and to debate contentious policy issues,” they wrote, citing a 2006 paper published by the libertarian Cato Institute.

“DOMA is an unprecedented federal intervention into this debate,” the brief states. “For the first time, Congress has created an across-the-board federal-marital status that exists independently from, and in some cases conflicts with, States’ marital-status determinations.”

The conflicts between state and federal jurisdictions are more than theoretical, the authors wrote, pointing out that DOMA’s blanket definition of marriage affected more than 1,100 federal statutes, a regulatory approach they compared to a sawed-off shotgun.

In his opinion, Kennedy mentioned these federal statutes (but not the shotgun).

Although the majority relied on a theory that mixed federalism and equal protection concerns, both Young and Blondel say that the brief plainly influenced the Court. In an essay in the Cato Institute’s 2013 Supreme Court Review, they state that Kennedy’s opinion “left little doubt that federalism principles were crucial to the result. DOMA was unconstitutional not simply because it treated gay and straight couples unequally but because it intruded on the states’ sovereign authority to define marriage for themselves.” They call Kennedy’s reasoning “not only coherent but brilliant — the best explanation yet of how federalism and equality doctrine intersect.”

Clearly delighted that their brief was singled out in the majority opinion — after garnering considerable media attention prior to the March oral argument in Windsor — Blondel acknowledges that, as a practical matter, it really had a primary audience of one: Justice Kennedy. (Or, as Young joked during a Duke Law panel last March, “the guy with ‘5’ tattooed on his forehead.”)

“Everyone knew [Kennedy] was the swing vote,” Blondel says, “but we wondered if the other conservatives would agree with the federalism argument. They didn’t, but we thought that was a possibility.

“We thought carefully about what Justice Kennedy had written in other gay rights cases and what he might find persuasive here.”

Young says that in the annals of gay liberation, Kennedy will go down as a major figure.

“If you want to point to people who’ve done the most for gay rights over the past 20 years or so, he’s right up there,” Young says. “I was clerking [for Justice David Souter] the year of Romer v. Evans [1996], which was the first Kennedy opinion that started to turn the tide. The Clinton administration didn’t even file a brief.” Kennedy went on to write the majority opinion in Lawrence v. Texas (2003).

In the Brief of Federalism Scholars’ concluding passages, Young offered something like a manifesto for state sovereignty, subject to Fourteenth Amendment constraints: “If States are permitted to fix family status with certainty, then same-sex couples can either hold the state officials responsible for that decision to account through ordinary political processes or move to a more congenial jurisdiction.”

Young concluded by acknowledging that this state-first approach is “somewhat messy,” but it is the best constitutional option for muddling toward social consensus.

He admits, however, that this may not provide much comfort to gay couples unlucky enough to live in one of the states that expressly prohibit same-sex marriage.

“If I were a same-sex couple that wanted to get married, I would not have a whole lot of patience for that,” he says. “I would have a plausible argument that simply as a matter of individual rights and equal protection, I should be able to marry the partner of my choice.

“But I don’t think we have a social con­sensus quite yet. And I don’t think the courts are ready for an equal protection ruling [on state laws]. And federalism is a way to work this out.”