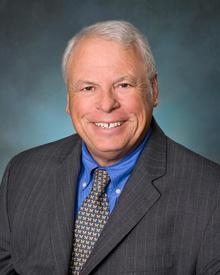 Vietnam veteran Roger K. Ferland, of Phoenix, has been named DAV’s Outstanding Disabled Veteran of the Year. In 1968, Ferland was diverted from law school when he was drafted into the Army. Sent to Vietnam, he first served as a squad leader and then platoon sergeant before he lost both legs and severely injured an arm when he stepped on an explosive device. For his service, Ferland was awarded the Bronze Star with V device, the Purple Heart and the Combat Infantry Badge. During his extensive hospitalization and rehabilitation, Ferland became engaged to his wife, Sandy, whom he married in 1970. In 1974, he graduated from Duke University Law School and began a distinguished career in environmental law.

After practicing for more than 35 years and serving on the Military Legal Assistance Committee of the Arizona State Bar, the certified DAV Chapter Service Officer worked with his local DAV to spearhead clinics providing pro bono legal assistance to veterans, particularly in the much-needed area of family law. Thanks to his continued efforts, two additional clinics are being planned. “My immediate response was to ask, ‘Why me?’” said Ferland of his nomination for the award. “Since the injury, what actions have I taken to make things better...for my family, for my community and for other veterans?” These are not just theoretical questions, Ferland contends. “We were blessed to survive our injuries while many others did not,” he explained. “That precious gift of survival imposed a responsibility to do something meaningful with our lives, and that responsibility is continuing and will continue as long as we live.”

Ferland’s fellow veterans believe he takes that responsibility to heart. “Roger displays the attitude that if one is disabled, it does not mean that one is incapable,” said Department of Arizona Adjutant Patrick Young. “A term used by military servicemen is to ‘adapt and overcome,’ and Roger is the preeminent example of this motto.” “Roger Ferland deserves our thanks for his commendable service to the nation and his continued dedication to veterans and their family members,” said National Adjutant Marc Burgess. “He exemplifies the spirit and determination of American veterans to overcome injuries or challenges they face and inspire others through their devotion and contributions.”