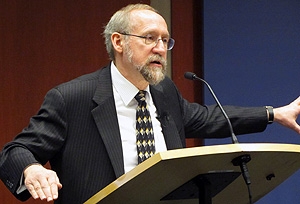 Emancipation was more than an accident of political pragmatism for Lincoln, but the president understood that he had to negotiate a careful path in order to emancipate the slaves and preserve the Union, said Finkelman, who is visiting from Albany Law School, where he is the President William McKinley Distinguished Professor of Law and Public Policy and Senior Fellow at the Government Law Center.  Finkelman focuses his scholarship and frequent public commentary on legal history, constitutional law, and race and the law.

Finkelman challenged modern historians, such as Richard Hofstadter, who take Lincoln’s careful approach as a less-than full commitment to emancipation;  Hofstadter referred to Lincoln as “among the world’s greatest political propagandists” and famously dismissed the Emancipation as having "all the moral grandeur of a bill of lading."

As America balanced on the brink of war, “Lincoln came to the presidency understanding the emancipation could not be on his agenda,” Finkelman said, adding that the president’s position was determined by the “universal understanding” of the Constitution in 1861, which precluded the federal government from interfering in slavery.

“This did not reflect Lincoln’s lifelong personal view about slavery,” Finkelman said. “As he said numerous times in numerous ways, ‘If slavery is not wrong, then nothing is wrong.’”

But Lincoln knew the strategic importance of states on the border between the North and the deep South to the looming war effort, said Finkelman.  He realized a move towards emancipation might have caused Kentucky to secede, which would have been disastrous for the Union.

“He has to secure the border states,” Finkelman said. “Without the border states, he cannot hold Washington, D.C., he cannot win the war. With 200,000 slaves in Kentucky, he has to make sure that Kentucky will not be able, or want, to join the Confederacy before he can start to think about ending slavery.”

Lincoln carefully addressed the concerns of abolitionists and slaveholders alike, while overseeing a massive military effort.

“The military situation begins to change in late 1861, when the United States begins what will be six months of extraordinary military success,” Finkelman said. As the Confederacy began to slowly shrink, the U.S. Congress began to move, legislatively, toward emancipation.

New York Times editor Horace Greeley wrote an editorial calling for an end to slavery in 1862, and Lincoln penned an unprecedented letter to the editor in which he stated that his goal is the restoration of the Union, even if it meant forgoing emancipation. This statement, however, was disingenuous, Finkelman said. Lincoln had already drafted the Emancipation Proclamation and informed his cabinet that he intended to issue it, so was simply laying the political groundwork for emancipation.

“What he is doing is preparing the north, preparing for popular support to end slavery,” Finkelman said.

On Jan, 1, 1863, Lincoln issued the Emancipation Proclamation, freeing the slaves.  Finkelman offered an explanation for Lincoln’s use of legalistic, dense language, even though he was a superb writer.

“So late at night," Finkelman continued, "during this sesquicentennial of the Civil War, when you can’t sleep and you turn on the TV and all you get is Gone With the Wind, and you see Scarlett O’Hara moaning about Tara being destroyed, and you see General Sherman’s march from Vicksburg to Charleston and then up the coast, keep in mind that in front of General Sherman’s army are invisible cherubim carrying a banner which says that all people who come behind this army are free. And keep in mind that General Sherman’s march to the sea is the greatest liberation of human beings in the history of the world until the Allies march on Berlin. And what they are doing is fulfilling Abraham Lincoln’s wish… that all men everywhere could be free.”

In addition to recent commentary on Lincoln’s political strategy regarding emancipation that has appeared in The New York Times, Finkelman’s recent  publications include Justice and Legal Change on the Shores of Lake Erie: A History of the United States District Court for the Northern District of Ohio, co-edited with Roberta Sue Alexander (Ohio University Press 2012), and the introduction to Thirty Years of Lynching in the United States 1889-1918 (Lawbook Exchange, 2012).

Finkelman began his lecture by recalling Professor Franklin, his teacher and graduate advisor at the University of Chicago, as “a spectacular man ─ as a scholar and as a human being.”

Franklin, who died in 2009, was the James B. Duke Emeritus Professor of History at Duke University; he also taught legal history at Duke Law School from 1985 until 1992. In addition to publishing such influential works as From Slavery to Freedom: A History of African Americans, Franklin was a significant figure in the civil rights movement; among his many activities he was part of the Brown v. Board of Education legal team, joined protestors in a 1965 march led by Martin Luther King, Jr. in Montgomery, Ala., and chaired President Clinton’s Advisory Board on Race.

The John Hope Franklin Chair was established in 2009 to honor Franklin and his tenure as a professor of legal history at Duke Law School. Gifts from Duke Law alumnus William Louis Dreyfus ’57, The Duke Endowment, and several other donors helped to endow the chair. The Law School awards the chair on a visiting basis to a distinguished scholar until a permanent appointment is made. The lecture is sponsored by the Robert R. Wilson Fund at Duke University.