The case, involving a defendant who posted comments on a matter of public interest on Facebook, has provided rigorous litigation training for several classes of students. 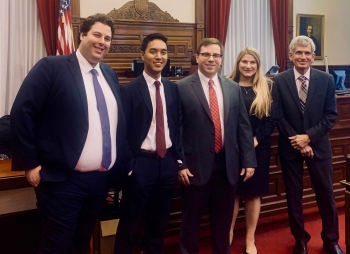 The First Amendment Clinic has secured a victory in a federal defamation case in South Carolina that has provided valuable training and courtroom experience for several classes of students since the clinic began litigating the matter in fall 2018.

On April 15, a federal trial judge granted the clinic’s client, Kevin Hennelly, summary judgment in a defamation suit. The suit was brought against him by a wealthy businessman over comments Hennelly posted in May 2017 on Facebook and a newspaper website that were critical of the plaintiff’s efforts to rezone Hilton Head National Golf Course for residential and mixed-use development.

The plaintiff, who has an ownership interest in the property, claimed to have suffered nearly $110.4 million in damages after Hennelly, a former utility worker, called him and a business associate “crony capitalists,” characterizing them as closely connected to a “corrupt” former Virginia governor, and writing that they had engaged in “documented corruption.” The clinic is also defending Hennelly concurrently in a separate lawsuit filed by the business associate. That case is ongoing before the same judge.

“This is a huge win for the clinic,” said Lecturing Fellow and Clinic Supervising Attorney Nicole Ligon ’16. “It is a great testament to the hard work of our students, who presented strong written and oral arguments on behalf of the client at all stages of the case, as well as to Robert Osborne and Robert Jordan, our outstanding local counsel at Parker Poe, who have played an important role in helping to oversee these efforts."

Neil Joseph ’20 and Harrison Newman ’20 helped draft the summary judgment brief, building on work and discovery done by prior clinic students including Luke Morgan ’19, Bryant Wright ’19, Michael Fisher, ’19, Lucy Xu ’19, Bryan Czako ’19, and Phil Golodetz ’21. They were prepared to argue the motion in March, but in-person arguments were canceled due to the COVID-19 pandemic and the court decided to rule on the parties’ briefs.

Added Newman: “We’re thrilled for our client, who has faced this lawsuit for more than two years. Our victory in this suit is also a win for engaged citizens who rightfully want to comment on the affairs of their local community.”

The plaintiff filed his action on Jan. 30, 2018, bringing claims for defamation, negligence, and injunctive relief, according to court documents. After dismissing the negligence claim, Judge David C. Norton, United States District Court for the District of South Carolina, Beaufort Division, considered whether Hennelly’s comments constituted defamation. In his April 15 opinion awarding summary judgment to Hennelly, he ruled that the plaintiff had failed to satisfy the elements of a South Carolina defamation claim, including proving common law malice.

“It is an important win for free speech,” said Morgan, who argued a motion to dismiss in the case last year and has written several articles on the scope of First Amendment protections since his graduation. “This case should never have existed. People shouldn’t be sued for expressing an opinion about matters of concern to their community.”

Throughout both defamation cases, Judge Norton has praised First Amendment Clinic students for the quality of their representation. He took the unusual step of recognizing Morgan and Aaron Chou ’20 in the motion to dismiss orders in each lawsuit.

“The court would like to acknowledge Aaron Chou, a third-year law student at Duke University School of Law, who skillfully argued this motion on behalf of Hennelly,” Norton wrote in the more recent of the two motion to dismiss orders. “The court wishes him well as he concludes his study of law and embarks upon what promises to be a successful career.”

Other clinic students including Craig Jones ’20, who last semester successfully argued a motion to compel discovery in the same case, Bailey Cage ’20, and Michael Wajda ’20 have also gained hands-on experience working on the clinic’s defamation matters.

“The clinic has been a highlight of my Duke Law experience,” said Jones. “The clinic functions like a tight-knit practice group at an especially supportive law firm.”

Clinic students also praised Ligon, Professor H. Jefferson Powell, the clinic’s director, and Ian Kalish, the clinic’s fellow, for their passion for First Amendment rights and noted the clinic provides a valuable service to defendants in an area of law that has relatively few practitioners.

Newman cited Ligon’s positive attitude and indefatigable work ethic as qualities to aspire to as a young lawyer. “She has set a very high bar for what my classmates and I can accomplish as soon as we transition into practice,” he said, adding, “I have found it especially meaningful to learn from Professor Powell. As anyone who knows him would say, he has a generous spirit and a natural enthusiasm for teaching. My experience in the clinic is a memorable bookend to my time at Duke Law.”

Said Joseph: “They invested much time and effort into making our case the best it could be, going over countless drafts of briefs, hours of practice of oral argument, and numerous discussions about defense strategy, while also empowering us. I felt like an integral part of a team, an equal part of Kevin's defense, and this experience prepared me for being a lawyer more than anything I've done at the law school. It was a great way to conclude my law school career and has set a tremendous foundation for my legal career.”

A copy of the summary judgment order can be found here.