Longtime First Amendment advocate Floyd Abrams weighed the tradeoffs Americans are willing to make to protect freedom of expression during a conversation on Oct. 22. 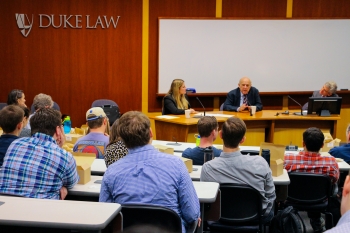 Floyd Abrams, one of the nation’s preeminent advocates of free speech, told Duke Law students on Oct. 22 that his storied career developed through the aligning of interest and opportunity. He urged them to defend the First Amendment rights of those with whom they disagree.

Abrams discussed the state of free speech on campuses, differences between the kinds of speech tolerated in the United States and in other democracies, and other trends concerning free expression in his lunchtime conversation with First Amendment Clinic Supervising Attorney Nicole Ligon ’16. Prior to joining the Duke Law faculty, Ligon worked with Abrams in the litigation practice group at Cahill Gordon & Reindel in New York City, where he has practiced for 56 years and now is senior counsel.

Abrams has argued numerous cases before the U.S. Supreme Court. He represented The New York Times in the 1971 case New York Times Co. v. United States, in which the Court ruled that the First Amendment protected the newspaper’s right to publish the Pentagon Papers, a classified internal government report that extensively detailed the nation’s history in Indochina and entry into the Vietnam War. Since then he has represented diverse media interests including newspapers, NBC, ABC, CBS, and CNN, National Public Radio, The McGraw-Hill Companies, and many others.

Abrams recalled starting his career at a time of “great antipathy toward the press,” when reporters were being subpoenaed to reveal their sources.

“Journalists were telling me they couldn’t do their job if they couldn’t, at least in certain circumstances, promise confidentiality and mean it,” he said.

“By a process of being interested in the subject and the fortuity of being around at a time when First Amendment law started really developing in the late 1960s and early 1970s, that’s what I came to do and be associated with. It was my good fortune that I was around at the right time.”

Abrams is notable for his staunch defense of free speech rights for clients with political beliefs that might be different from his own progressive leanings. With Kenneth W. Starr ’73 he represented U.S. Sen. Mitch McConnell in 2003 in McConnell v. Federal Election Commission, and again represented McConnell as amicus curiae in support of the appellant in 2010’s Citizens United v. Federal Election Commission, two cases involving whether restrictions on broadcasts funded by corporate campaign contributions violated First Amendment free speech protections.

“The First Amendment is nothing unless it applies to everybody – it can’t be only applicable to or usable by people with one set of political views or political engagement,” Abrams said. “Regardless of its political and often even social impact, it has to be applied with equal vigor.”

Abrams noted that the United States tolerates a far broader range of speech than Canada and most countries in Western Europe. He cited as an example Snyder v. Phelps, the 2011 case in which the Supreme Court ruled 8-1 that even offensive and outrageous speech by members of the Westboro Baptist Church outside a funeral for a soldier could not be the basis for a tort liability claim. Such speech would constitute a crime in many other democracies, he said.

“The theme of the First Amendment as it has been applied through the years in the courts is that we’re ready to take, and to inflict, a lot of pain for the — hopefully — greater good of living in a freer society and avoiding the risks of governmental involvement in what people say, what they’re allowed to say, and the like,” Abrams said.

"Eight members of the Court signed on to the proposition that outrageous, mean-spirited, harmful speech such as what was involved there was protected by the First Amendment because, for the most part, we just don’t trust the government to get involved in speech, thought, religious, political, et cetera positions and that’s the way we live.”

Responding to a question from Ligon, Abrams also addressed the issue of campus speech. While private universities are free to limit speech, most have agreed to tolerate a wide range of speech by students and invited speakers, and strive to represent a range of different viewpoints. That’s the right approach, he said, arguing that banning certain speakers is counterproductive at a place of learning.

“The darker side to this is that some of the speakers who come are destructive in what they say,” Abrams said. “The better part of our approach lets students hear different views, make their own choices. It’s really important that the norm at universities is that there’s more free speech rather than less, and more openness on the part of students to listen and make up their own mind. The First Amendment’s not going to work if we shut people up.”

Abrams’ visit to Duke Law was co-sponsored by the First Amendment Clinic, the American Constitution Society, and the Federalist Society.