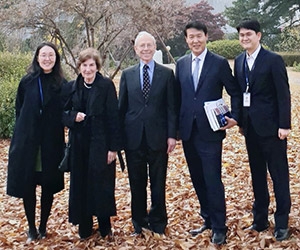 The event was part of a weeklong visit to the country sponsored by the Duke Korean Alumni Association. Horowitz, who retired in 2013, and her husband, James B. Duke Professor of Law and Political Science Emeritus Donald L. Horowitz, met with members of the Duke Law Korean Alumni Club and made visits to and gave talks at Korea’s top judicial and legislative bodies.

Graduates have long praised Judith Horowitz for her devotion to international students, most of whom come to Duke for a year to pursue an LLM after completing a law degree in another country. The LLM program grew significantly during her tenure and now enrolls between 90 and 100 students from 35 to 40 countries annually, with additional international students enrolling in the SJD and JD programs.

“From the bottom of her heart, Judy helped many foreign students to adjust themselves to the life at Duke and in the U.S.,” said Chulho Chang JD/MBA’91, one of the organizers of the visit. “She was like an aunt to foreign students. Without Judy and Don, our lives at Duke would not have been the same.”

At the dinner, alumni presented Judith Horowitz with a plaque noting that she had “affectionately taken us Korean students under your wings as your dearest friend” and expressing “everlasting appreciation for your kind effort and consideration.”

“This was an extremely gratifying experience, which I shall long remember,” she said. “And I must say that a significant part of the gratitude they expressed really needs to be attributed to the Law School and the welcoming environment it has provided for international students—a matter on which many of the alumni also commented.

“Our Korean alumni have been extraordinarily successful in their careers, and they attribute much of their success to what they learned and experienced at Duke.”

Donald Horowitz, a renowned scholar of comparative constitutional design and ethnic conflict in divided societies who joined the Duke faculty in 1980, made two presentations during the trip. 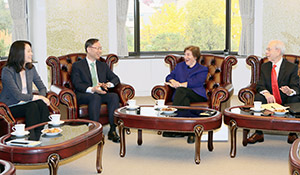 On Nov. 6, at the invitation of Kiyoung Kim ’02, who was appointed a justice on the Constitutional Court by South Korea’s president in October, Horowitz gave a seminar on the rule of law, how it is established, and common judicial mistakes. Attendees included judges and officials from European and Asian constitutional courts.

On Nov. 8, at the invitation of Jun Sang-Soo ’00, a senior official at South Korea’s National Assembly, Horowitz gave a public lecture attended by legislators and legislative staff members on “Severely Divided Societies and the Rule of Law.” The talk explored the problems of countries in which a few ethnic or religious groups seek to dominate the state and exclude others.

“Many of the difficulties encountered in reducing interethnic conflict involve establishing a durable rule of law, and I discussed the underemphasized role of a vibrant rule of law in securing arrangements to reduce conflict in these countries,” Horowitz said. “But I also emphasized the need to take measures to protect the independence of judges in countries where the courts must perform these functions and where politicians have every temptation to interfere in their performance.”