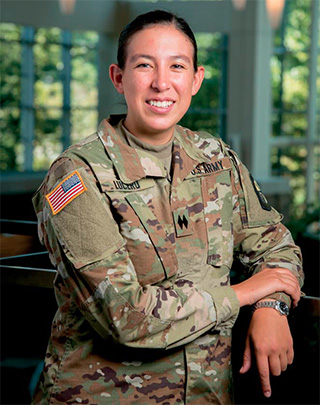 Gabs Lucero first learned about sexual assault as a sixth-grader in Fort Collins, Colo., when a friend told her she’d been abused. “I didn’t know what sexual abuse was, but as I learned more about it over time, I realized just how common — and how big — of a problem it was,” she recalls. That early realization sparked a resolve to aid victims of sexual assault that has given Lucero an unwavering sense of direction in her activities, education, and career plans, from her high school advocacy for awareness and prevention of sexual assault, to her decision to study law and policy at Duke, to her goal of becoming a special victims’ prosecutor in the U.S. Army JAG Corps. “I was fortunate to have had something I was really passionate about when I was pretty young,” she says.

At Columbia University, where she majored in gender studies and sociocultural anthropology, Lucero served as a campus rape crisis advocate, manning a hotline, responding to hospital calls, and accompanying victims to court. By her sophomore year, her volunteer work got her thinking about becoming a lawyer.

“I saw how the legal framework surrounding issues of sexual assault could either help or hurt them,” she says. “I hope to be on the helping side.” Around the same time, Lucero began considering a career in the Army, having been impressed by her interactions with students who were veterans or on active duty in the service. “They always seemed like people who I’d want to work with and that inspired me,” she says. They also told her about the JAG Corps. “Learning more about sexual assault and about the JAG Corps in college confirmed my decision to go to law school.”

Learning, through media coverage, that the Armed Forces were developing new policies to address the problem of sexual assault within their ranks, Lucero spotted an opportunity that, she says, married her interests: “I realized that if I started my graduate studies as new policies about sexual assault were being implemented, by the time I entered the military four years later, I’d be able to see the trickle- down effects. I would be able to see whether they were actually working.”

Lucero entered Duke University’s Army ROTC program as soon as she arrived on campus to pursue her master’s in public policy along with her JD. It has proven to be a perfect fit; in the fall semester of her third year, the seniors honored her with the ROTC Leadership Award. “It meant a lot to me that they thought I deserved that,” says Lucero, who is now the cadet battalion commander for the Duke Army ROTC Blue Devil Eagle Battalion.

She has received guidance from several faculty members with military ties, including Professor Tom Taylor at the Sanford School of Public Policy, who served as an Army attorney and in the Pentagon, and Professor and Maj. Gen. Charles Dunlap, director of the Center on Law, Ethics and National Security and a former Air Force deputy judge advocate general. Lucero credits her ROTC professor of military science, Lt. Col. Keirya Langkamp, with clarifying the privilege of being an officer. “She pushed all of us to understand the challenge and the reward of being responsible for people below you, having that kind of structure and knowing what that means,” Lucero says. “That was really inspiring and pushed me both in ROTC and elsewhere by realizing the kind of impact I could have.”

Langkamp describes Lucero as an exceptional young leader and an excellent role model of the Army’s seven values: loyalty, duty, respect, selfless service, honor, integrity, and personal courage. “She is both self-aware and regulated — poised we call it in the Army — and demonstrates a high degree of empathy,” Langkamp says. “Cadet Lucero’s emotional intelligence will serve as a force multiplier for the Army, both as a leader and a future JAG officer.” Lucero, who describes herself as “a really people- driven person,” has assumed multiple leadership positions at Duke Law, serving as director of the Coalition Against Gendered Violence, as a Mock Trial Board member, as vice president of the Government and Public Service Society, and as co-editor-in-chief of the Duke Journal of Gender Law & Policy. As co-director of the Veteran’s Assistance Project (VAP) in her second year at Duke Law, Lucero worked successfully with her classmate Sarah Williamson and Matt Wilcut, a staff attorney at Legal Aid of North Carolina and VAP supervisor, to redesign the program so that more students could be recruited and trained to effectively serve more veterans. “Gabs was tireless and committed throughout the design process and as a leader of the project,” says Wilcut, who also praised Lucero’s ingenuity in addressing client problems and her willingness to recruit and mentor volunteers. “Her personal enthusiasm and commitment has a great deal to do with the success of the project.”

Wilcut selected Lucero to handle the project’s first military sexual trauma case, saying she produced legal research that will be helpful in all similar cases. Her analysis of the issues was “spot on,” says Wilcut, and persuaded the Veterans’ Administration to reverse its earlier refusal of benefits to the client. As a leader and advocate, Wilcut adds, Lucero “has produced the greatest single-student contribution to the Veteran’s Assistance Project in terms of project sustainability and client success.”

Off campus, Lucero serves as a hospital responder for the Durham Crisis Response Center and coaches a girls’ youth basketball team at the YMCA. “It’s such a nice reminder of the world outside,” she says. “For kids at that age, having someone to listen to them makes a world of difference. All they care about is that you’re there.” Lucero, who received the 2015 Sarah Parker Scholarship Award from the North Carolina Association of Women Attorneys, was honored with the National Association for Law Placement’s Pro Bono Publico Award in October. “I don’t know how Gabs manages to do it all,” says Stella Boswell, assistant dean of Public Interest and Career Development, who nominated Lucero for the NALP award. “She came into law school with clear career goals and focus, and has helped build and support the public interest community here through involvement with the Government and Public Service Society, recruiting others to be involved in GPS and pro bono, repeatedly sitting on panels to advise other students, and taking time to consult with us on expansions to public interest and pro bono at Duke. The depth of Gabs’ commitment to service is really outstanding.”

Throughout her law and policy studies, Lucero has continually deepened her academic investigation of issues surrounding sexual assault and prevention. In one policy paper, she threaded together victims’ stories with scholarly research to illuminate the pervasiveness of rape culture in the military and how it impacts low reporting rates. “One of the things I was trying to focus on was to get people to pay attention to what the victims are saying they need,” she says. Her paper, titled “Military Sexual Assault: Reporting and Rape Culture,” was published in the Winter 2015 edition of the Sanford Journal of Public Policy (Vol. 6 No. 1) and reprinted in Sex, Gender, and Sexuality: The New Basics, an anthology published in September. Lucero, who interned with the Army JAG Office of the Staff Judge Advocate in Fort Knox, Ky., during her 2L summer, aspires to become a special victims’ prosecutor to continue her advocacy work while still influencing policy. “I’d like to figure out the best ways to deal with sexual assault as a crime in the military,” she says. “I’m just tired of seeing people disheartened by the legal system.”