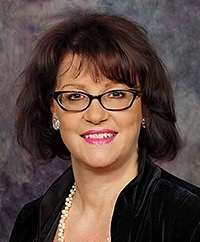 Susanne I. Haas ’85 ’87 has been named chair of Duke Law School’s Board of Visitors (BOV), effective July 1. She succeeds David Ichel ’78, who has headed the Law School’s alumni advisory group since 2009.

“She has demonstrated a tremendous commitment to the Law School as a volunteer and I know she will helpus strengthen our dedicated community of alumni and work together to extend our record of excellence.”

Levi added: “I want to thank David Ichel for his outstanding tenure as chair of the BOV. David has been a wonderful leader, helping us to move the Law School forward during a challenging time and providing me and the Law School with indispensible advice and support.”

Haas is the first woman to lead the BOV as well as the first international graduate in the role. A native of Germany, she came to Duke after obtaining a law degree from Johann-Wolfgang-Goethe University in Frankfurt, Germany. Today, she is the vice president and general counsel of Environmental and Combustion Controls at Honeywell International Inc., where she has worked since 1987.

Haas is a former member of the Law Alumni Association Board of Directors and served as its president in 2004. She is also a regular participant in the Business Law Society’s ESQ Career Symposium, has taught classes during the Law School’s Wintersession program, and was the keynote speaker at the 2014 International Alumni & Student Dinner. In 2012, Haas received the Law School’s International Alumni Award. She is married to Ross Formell ’87. One of the couple’s two sons is a Duke undergraduate.

“It is an honor to have been asked by Dean Levi to chair this board, which is made up of very impressive, high-achieving, and very caring people who all want the best for the Law School and work tirelessly to support it,” Haas said. “I have very big shoes to fill, but I have already been assured of the support of all of my friends on the BOV, and that makes me feel a lot better about succeeding David Ichel, Michael Dockterman [’78], Peter Kahn [’76], and other previous chairs who are such outstanding leaders. I am looking forward to working with the dean and the board to provide as much support, counsel, and encouragement as we can to our Law School, its faculty, staff, graduates, and students. ”

The Board of Visitors is a reporting and recommending body to the Law School and university administrations on matters of student development, alumni relations, fundraising, and faculty and academic affairs. Duke Law’s volunteer alumni boards are committed to communicating the interests of alumni and friends of the Law School to the dean and staff, representing the Law School in the greater community, and providing leadership for community-building initiatives and other programs that support the school.

Haas said she hopes to encourage more alumni to get involved with the Law School, broadening the base of volunteering and fundraising.

“All of us alumni are who and where we are in part because we went to Duke Law School, and many of us went with the help and support of alumni who came before us,” she said. “What better way to perpetuate the good others did for us than to do the same for the students today? Since Duke is a relatively small law school, the number of potential supporters is smaller than that of many other top law schools, so every Duke Law alum can make a much bigger difference than an alum of a larger school.”

Ichel, who in April received the Dean’s Award, praised the energy demonstrated by the BOV and the entire alumni community during his five years as chair, which he called “palpable.”

“It really reflects what separates Duke from most other great law schools,” said Ichel, a partner at Simpson Thacher & Bartlett in New York. “While Duke is a newer school, there is a long lasting special bond to Duke among Duke alumni that I believe bodes well for the future of Duke as more and more alumni give back in time and resources.”