Professor Laurence R. Helfer conducted interviews and field research in four countries in Eastern and Southern Africa in July and August 2013, continuing a long-term study of sub-regional courts in Africa and the Americas.

Together with three collaborators, Helfer is examining how the courts associated with three African sub-regional organizations, the Economic Community of West African States (ECOWAS), the East African Community (EAC), and the Southern African Development Community (SADC), have expanded their jurisdiction from economic integration issues to human rights.

The courts share many similarities in judicial structure and in the legal and political context in which they operate. Notwithstanding these similarities, the courts have met with varying degrees of success in adjudicating human rights suits against governments. This creates a natural experiment to identify the conditions under which international courts can help to promote compliance with human rights, said Helfer, the Harry R. Chadwick, Sr. Professor of Law and co-director of Duke’s Center for International and Comparative Law, whose expertise includes the design and effectiveness of international institutions.

“These courts are similar in many ways: They are located in Africa, they exercise jurisdiction over countries in various stages of transition to democracy, and they were initially created to advance economic integration and trade in their respective sub-regions. Perhaps most remarkably, the dockets of all three courts expanded to include human rights cases at around the same time. Yet the governments in each sub-region have reacted very differently to these developments, depending on the way in which the judges’ jurisdiction was expanded,” Helfer said. 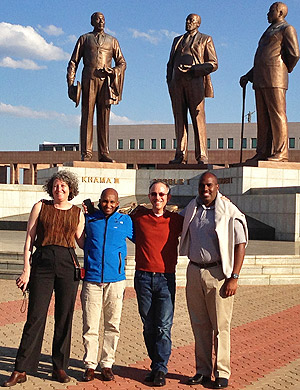 Helfer and his colleagues in front of the Three Dikgosi monument in Gaborone, Botswana. The new High Court building is in the background. Those pictured are, from left to right, Prof. Karen J. Alter, Mihreteab Tsige Taye, Prof. Laurence R. Helfer, and Prof. James T. Gathii.

The 2013 trip builds on research Helfer began in 2011, when he and Northwestern University political scientist Karen J. Alter traveled to Abuja, Nigeria, the headquarters of the ECOWAS Community Court of Justice. Professors Alter and Helfer conducted more than thirty interviews with judges, lawyers, government officials, and NGOs, with the goal, Helfer said, of “better understanding what influence, if any, the ECOWAS Court is having in the region and the mechanisms of that influence.” The 2011 research trip led to the publication of “A New International Human Rights Court for West Africa: The ECOWAS Community Court of Justice,” which will appear in October 2013 in the American Journal of International Law, one of the world’s leading peer-reviewed law journals.

The collaborators on the current project include, in addition to Professor Alter, James T. Gathii, a chaired professor at Loyola University Law School in Chicago, and Mihreteab Tsige Taye, an Ethiopian lawyer and PhD candidate at iCourts: The Danish National Research Foundation’s Centre of Excellence for International Courts at the University of Copenhagen.  iCourts provided funding for a workshop, “Sub-regional Courts in Africa: Comparing Mandates, Priorities and Objectives,” co-organized by Helfer and his colleagues at the Mandela Institute of Wits University School of Law in Johannesburg, South Africa. The workshop provided an opportunity for officials, lawyers, and academics to discuss the histories, challenges and future possibilities of Africa’s sub-regional courts.

The interviews and meetings organized by Helfer and his colleagues will inform their future research. In September, Helfer, Alter and iCourts director Mikael Rask Madsen will host in Copenhagen the first of two scholarship roundtables on International Courts in their Social and Political Contexts, the second of which will be held at Duke Law in May 2014. The workshops bring together leading scholars in law, political science and sociology and will result in the publication of a symposium issue in Duke’s Law and Contemporary Problems.

According to Helfer, talking with judges, officials, NGOs, and bar associations in each sub-region provides a more accurate picture of the interactions between national and international legal systems. “On paper, many of these institutions look quite similar. But they operate very differently in practice, with each Community’s officials and judges building distinctive relationships to their national counterparts. Reviewing the courts’ case law doesn’t fully reveal these important relationships.”

A primer on sub-regional legal systems in Africa

“All three sub-regional courts were created in the 1990s to interpret the treaties and promote compliance with Community economic rules, usually relating to trade, investment, or the free movement of labor or goods,” Helfer explained. In practice, however, the member states were loath to use the courts to sue each other, generally preferring to settle differences through diplomacy and negotiation. Opening the courts to private litigants, however, changed their functions entirely, and helped trigger the expansion into human rights.

“My past research indicates that one of the best ways to activate an international court is to enable private litigants, such as individuals and NGOs, to file suits against governments,” he said. “But this creates an interesting paradox: the courts need to open up to private actors to function, but many of those actors file cases that governments would prefer to avoid.”

A spectrum of outcomes

Of the three sub-regional courts he has studied, Helfer has found a spectrum of outcomes, and the ECOWAS Court lies at one end of that spectrum.

“The ECOWAS Court’s first case came from a private trader who challenged the closure of a border as a violation of the freedom of movement protected in ECOWAS treaties and in international human rights law. In a 2004 decision, the Court said, in effect, ‘We think you have a very strong case, we’re quite sympathetic, but we don’t have any jurisdiction over cases from private actors. So we have to dismiss your case.’”

The case spurred ECOWAS judges to launch a public campaign to receive complaints from private litigants, citing an obscure provision in the ECOWAS treaty that allowed the judges to make proposals to amend their own jurisdiction. “The judges also met with bar associations, NGOs, and sympathetic government officials,” Helfer said. “They gave public speeches and interviews to the news media. Over the course of nine months they convinced the member states to give them jurisdiction over complaints from individuals and NGOs with respect to human rights issues."

“The ECOWAS Court had express political support for its expanded jurisdiction, and that has helped the Court to survive,” Helfer stressed. “In 2005, the Court started receiving human rights cases. And even though governments were nervous about the political sensitivity of some of these cases, because the Court’s expanded jurisdiction has political buy in, the judges have greater legitimacy to rule against governments.”

The ECOWAS Court is hearing more and more human rights cases, although the member states’ record of compliance with the Court’s judgments remains a work in progress, Helfer said.

In contrast, the East African Court of Justice’s expansion into human rights via judicial lawmaking has not been as successful, he said. The first case heard by the EACJ involved a controversial election dispute, and the member states responded by narrowing the Court’s jurisdiction and limiting access by private litigants. Yet the EACJ has since reviewed human rights complaints framed as violations of the EAC treaty, which includes references to human rights, the rule of law, and good governance. 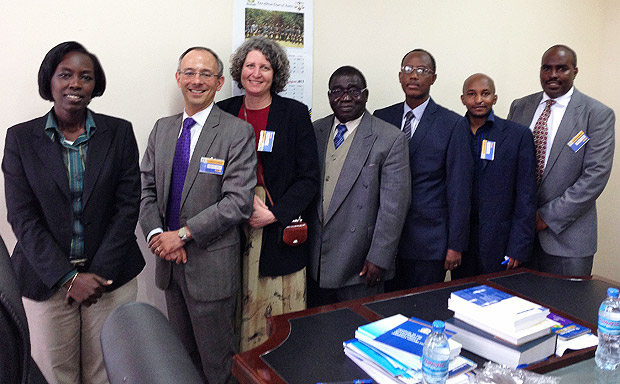 “The EACJ survives, but it has not—at least not yet—had the same impact as the ECOWAS Court,” Helfer said. “In part, this has to do with the interpretive strategy the judges utilized. They rushed into a controversial case and made some bold legal pronouncements that triggered opposition from some member states. But the judges have support from regional law societies and human rights NGOs. It will be interesting to see how the EACJ evolves in the future.”

The third sub-regional court in Helfer’s study, the SADC Tribunal, took as one of its first cases a challenge by a white farmer against post-colonial land reforms in Zimbabwe. “This was probably the most politically sensitive case the judges could have heard, and it was filed against Zimbabwe, a country likely to resist the Tribunal’s authority,” he said.

Zimbabwean President Robert Mugabe, whose government has a long history of repression, balked at an international court challenging one of its signature policies. “Mugabe met with his counterparts in the other SADC countries and essentially said, ‘The Tribunal should only have interstate jurisdiction, not private party access. And while we are considering this reform, we should suspend the Tribunal,’” Helfer explained. “That’s what in fact happened. Since 2012 the SADC Tribunal hasn’t functioned.” As a result, this is the “not so happy story” of the three sub-regional courts.

Travelling to Africa is an essential part of Helfer’s desire to understand the history, evolution and impact of these courts. “When it comes to how international institutions operate, and in particular how they interact with domestic actors, such as judges, government officials, administrative agencies, litigants, lawyers, and bar associations, it’s not enough read the case law. To understand the institutions at a deeper level, you have to go to where the court is located, meet with the relevant constituencies, and identify how the court is important to their work.”