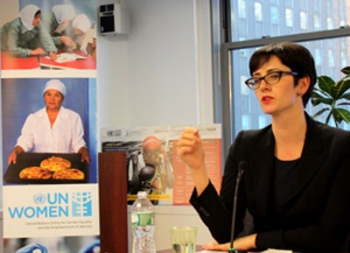 Clinical Professor Jayne Huckerby participated in the official launch of the UN Women’s Constitutional Database at UN Women Headquarters in New York on Dec. 13.  Huckerby produced the content for the database, the first-ever to map women’s rights in constitutions worldwide, prior to joining the Duke Law faculty in July.

At the Dec. 13 event, Huckerby joined Saraswathi Menon, Director of the Policy Division of UN Women and Magnus Lennartsson, Minister (Economic and Social Affairs) of the Mission of Sweden to the United Nations, to unveil the database to the UN system, governments, and members of the academic community and civil society.

The database maps women’s rights in 195 countries and contains 62 languages.  To produce the database, Huckerby reviewed all countries’ constitutions to identify their impact on women’s rights in areas such as marriage and family life, property and inheritance rights, citizenship, education, and employment.

Constitutional guarantees of equality can strike down customary inheritance laws that discriminate against women, as they did in a recent landmark case in Botswana, and may also include quota systems to strengthen women’s participation in government, Huckerby said.  The 2003 Rwandan constitution, for example, required women to hold at least 30 percent of posts “in all decision making organs.” Rights guarantees in specific areas can also provide an essential platform for advancing women's rights, she said, noting that Nepal's 2007 interim constitution’s guarantee of reproductive rights provided the basis to require the government to ensure broad access to safe and legal abortion services, as well as to address maternal morbidity.

“A database that analyzes constitutions through a gender lens is very useful for scholars, advocates, and students interested in human rights advocacy and comparative constitutional research and practice,” said Laurence R. Helfer, the Harry R. Chadwick, Sr. Professor of Law and co-director of the Center for International and Comparative Law.