The clinic filed a petition for a writ of habeas corpus in November 2020, challenging Luis Juarez's lengthy civil detention absent a determination that he represented a flight risk or danger to the community. 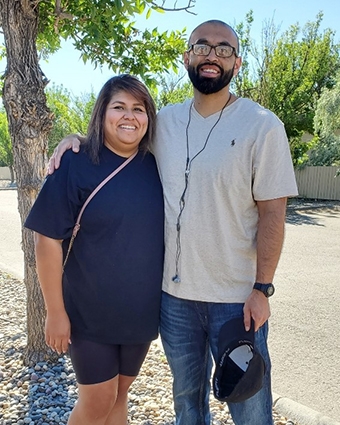 Duke Law School's Immigrant Rights Clinic successfully challenged the detention of a client who had been held by federal authorities for 16 months, leading to his release on June 16.

Luis Juarez emerged from immigration detention following an agreement by Immigration and Customs Enforcement (ICE) to release him on bond. The clinic had filed a petition for a writ of habeas corpus in November 2020, challenging Juarez’s lengthy civil detention absent a determination that he represented a flight risk or danger to the community.

Clinic student-attorneys Andrew Lindsay ’21, Mario Moreno ’21, and Natalie Pate ’21 teamed up with the Immigration Clinic at University of Idaho and attorneys Luis Cortes Romero and Andrew Augustine of Novo Law to represent Juarez.

“If you told me a year ago that I would have drafted several briefs, argued before a federal court, and ultimately persuaded a district court judge that the government was violating my client’s Fifth Amendment rights, I might have laughed at you,” said Lindsay, who graduated in May and will join the New York office of Davis Polk & Wardwell. “But that's exactly what happened with the help of my clinic team. While all the preparation up to that point was difficult, I understood that it was nothing close to my client's experience in detention. That knowledge made me push through. I'm glad I did because working for Mr. Juarez was the highlight of my law school career.”

Juarez, a longtime lawful permanent resident, is facing deportation based on two drug-related convictions from 2015. He successfully challenged removal proceedings in 2018 and was released to his three U.S. citizen children, his parents, and his siblings, nearly all of whom are also U.S. citizens. A year later, in February 2020, immigration officials appeared at Juarez’s home to re-arrest him because his case had been reopened in immigration court.

The habeas petition contended that Juarez’s successful rehabilitation and reintegration into his family and community demonstrated that his civil detention was unreasonable under the Fifth Amendment, that it was unconstitutionally prolonged, and that it violated the Eighth Amendment’s protection against excessive bail.

“Through our research, we were able to identify numerous possible claims that could be raised, including some rarely seen in other habeas petitions,” said Moreno, who will start at the San Diego office of Latham & Watkins in August. “Additionally, our research allowed us to better understand the conditions experienced by detained individuals, and how those conditions may give rise to additional claims.”

Lindsay and Moreno argued the petition before the magistrate judge via Zoom in April. The federal district judge ultimately agreed with Juarez and ordered the government to appear before him in a bond hearing to demonstrate why Juarez’s continued detention was justified. That ruling led to a settlement and Mr. Juarez’s long-awaited return to his family.

“Our work on this case was a great exposure into the human element of immigration work,” Moreno said. “We were able to work closely with our client and his family to understand what they have been going through, ultimately incorporating their story into the habeas petition. Working on this case represented an incredible opportunity. We not only developed our own personal skills, but we were able to represent and work with our client and his family, which was ultimately the most rewarding aspect of our representation.”

Added Pate, who will join immigration law specialist Fragomen, Del Rey, Bernsen & Loewy in Washington, D.C: “What drew me to work with Luis initially was his story. This is a man who has lived through what this country gets wrong about so many things — not just the way we regulate and criminalize drug use, but also the extent to which the immigration system penalizes non-citizens on top of the criminal justice system. He has now spent over two years just in immigration detention after three years of state custody. He has done everything our society asks of people with drug convictions in terms of rehabilitating himself — he served time, he took classes, he stopped using drugs, he paid court fees, he completed a rehab program, he got a job, he made amends with family, he took care of his kids. It is outrageous to me that it took three years just to get the government to have to justify his detention for the first time. Nothing will make up for the years Luis has lost. So, this victory feels important in terms of vindicating Luis’ rights but remains very incomplete.”

Clinical Professor Kate Evans, who directs the clinic, expressed pride in the students’ work to win release for Juarez and a long overdue reunion with his family.

“Immigration detention in the U.S. is fundamentally broken,” Evans said. “Our system tears families apart and imposes irreparable harm on everyone involved. Study after study show that alternatives to detention are highly effective in ensuring that individuals appear at required hearings while also avoiding the steep human and financial costs of civil detention. Yet Mr. Juarez was forced to spend more than two years in immigration custody. Hearing the joy in his voice as he walked out of detention and into the welcoming arms of his sister is a moment I will treasure for many days to come. ”