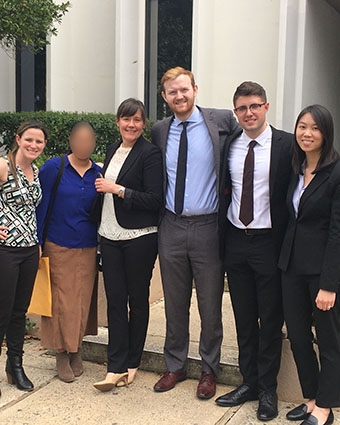 The Immigrant Rights Clinic team with their client, post hearing. From left: Hila Moss, client, Kate Evans, Nick Lynch, David Gardner, and Amanda Ng. (The photo is used with the client’s permission; her face is obscured to preserve confidentiality.)

A team of three student attorneys from the Duke Law Immigrant Rights Clinic presented their client’s asylum claim in a federal immigration court hearing on March 13.

The four-hour hearing before an immigration judge in Charlotte — a few days before that court’s closure by the U.S. Department of Justice due to the Covid-19 pandemic — was the first “removal” hearing handled by the clinic, which welcomed its inaugural class of students in January. A decision is pending.

Third-year students David Gardner, Amanda Ng, and Nick Lynch handled all aspects of their client’s representation under the supervision of Clinical Professor Kate Evans, the clinic’s director. The client, whose relationship to a witness in a prosecution tied to a public official made her a target for violence in her home country, had her case referred to the clinic by Hila Moss, managing attorney at the United States Committee for Refugees and Immigrants (USCRI), who served as co-counsel.

The clinic team collectively invested more than 700 hours on the matter, meeting with their client and other witnesses, developing the factual record and legal theories, collecting expert testimony to support her asylum claim, and compiling an 800-page evidentiary record that the judge admitted into evidence. Evans described the students’ work at all stages as exemplary, commending their documentary submissions to the court that included an extensive brief, their oral advocacy, and the fact they worked throughout their spring break to prepare for their client’s long-awaited court date, while doing their best to follow emerging public health directives regarding social distancing.

“The final products went far beyond my highest expectations, and it was a joy to hear them at each part of the hearing,” Evans said.

Crafting a record highlighting kinship ties as longstanding basis for asylum protection
Noting the extreme discretion needed to protect the client’s safety over and above the standard duty of confidentiality, Evans said her claim ran into a new hurdle last July, when U.S. Attorney General William Barr tried to end the longstanding ability of migrants to claim asylum based on family connections, “unless [the family] has been shown to be socially distinct in the eyes of its society, not just those of its alleged persecutor.”

“In this case, it was really important for us to develop the record and the legal arguments for why family relationships are recognized under U.S. refugee and asylum law and why they should remain so,” Evans said. “We had to ensure we positioned the case well for any sort of appeal up to the federal courts that would actually review the decision by the attorney general.”

After interviewing their client and available witnesses through an interpretation service, the students developed five distinct bases under which she could validly claim asylum. They each identified an expert witness who could authoritatively speak to the court about the precise society from which the client fled and her place within it to support her claim for ongoing protection: Gardner identified an expert on the dangers faced by and paucity of protections for criminal witnesses, Ng found an authority on the contemporary political society and the role of churches, and Lynch located an academic with expertise in the significance of family structures in client’s home country.

“Identifying experts is a complicated project in and of itself that demands an understanding of the fact development in the client’s case and the legal theories — which here, on three separate fronts, are cutting-edge and controversial,” Evans said. “The students needed to understand who can in fact be qualified as an expert to speak on these very precise issues around family structures and societal expectations of family; the political dynamic that exists between local leaders, criminal structures, and religious institutions; and then a witness protection program with respect to the actual confidentiality and protection measures that are or not available. All those facts are absolutely critical to protection.”

The students also helped the experts understand the legal issues they needed to address in their declarations to provide the requisite foundations to support their client’s asylum claim, which in turn helped them build out their arguments as to why her particular family contacts and the facts of her case meet the standards for asylum, Evans said. And that’s critical, both to increase the chances for their client to prevail in her removal hearing and to any subsequent appeal to a federal circuit court, a strong possibility given the fact that only 3% of asylum claims heard in the Charlotte court are granted.

“I’m always thinking about the record that I want if I have to appeal,” she said. “The students put together an amazing evidentiary record.” Its importance, in fact, became particularly clear when the presiding judge declined to accept telephonic testimony from their expert witnesses — a standard practice when experts are far away and offering their services on a pro or low bono basis, Evans said. But he granted the team’s motion, drafted by Gardner, to accept all of the briefs and the expert declarations they filed on Feb. 27, even though, at 800 pages, they exceeded standard guidelines in length.

“Managing the court,” building skills
Each student on the team handled a portion of the hearing, preparing through multiple moots at the Law School with Evans standing in for the government lawyer and Moss taking the role of the judge. Ng’s opening argument, Evans said, “was precise, pointed, accessible, and easy to hear. She got the judge oriented to our evidence and how we laid everything out so that he had a roadmap through the various claims and knew where he could find evidentiary support for each of them.” She also emphasized that while all five of their asylum claims were fully presented, he only needed to accept one of them to grant asylum to their client.

Evans called Lynch, who handled both the extensive examination-in-chief and redirect examination of the client, “absolutely remarkable” in addressing the judge’s questions and concerns while also making sure to elicit testimony that would be essential to have on the record in the event the case is appealed. “He couldn’t let the adjudicator alone determine what the testimony is in our case, and had to elicit testimony in areas the judge did not, at least initially, think were important, but tied into the closing argument,” she said. “That kind of management in the court is quite complicated.”

In his closing argument, Gardner wove together the testimony and the documentary record to demonstrate why the client met the asylum eligibility requirements, emphasizing both the facts of the case, which the client outlined in court, and the broader context in which those events took place, to which the experts attested. An added challenge: adjusting both the pace and the content of his closing argument to meet both the time limits and concerns presented by the judge.

All three students identified skills they derived from their work on the case that are certain to serve them well in their careers. Ng, who plans to enter the public interest sector in Seattle, said complex case management is one, given that each of the five independent grounds for asylum they were advancing required detailed factual development, significant evidentiary support, expert witness insights, and corroborating county condition reports. “Within the span of eight to 10 weeks, I was pushed to juggle a number of concurrent tasks and to adapt to changing circumstances in a way that I’ve never experienced firsthand in a legal case.”

Lynch, who will begin his career with the Appellate Division of the Miami-Dade Public Defender’s Office, said that crafting a section of the brief addressing the client’s family-based asylum claims honed his legal writing skills. In particular, he had to navigate the attorney general’s decision, which “contains an unclear legal standard and a lot of language that is unfavorable to refugees who are persecuted because of family membership,” he said.

Gardner, who will enter the Civil Rights Division of the U.S. Department of Justice through the Legal Honors Program, is certain that working with experts will serve him well in practice, as will the experience of having to adapt his prepared closing argument as the hearing progressed (and overcoming nerves to deliver it effectively). “It became clear that there were areas that the judge was concerned with that needed emphasis, so I had to shift from what I prepared to make the most effective argument,” he said. “I had to balance a persuasive oral argument with getting the information we needed into the record and had to cut sections as I prioritized the most important arguments.”

The case also demonstrated to the students the importance of such “soft skills” as communication and teamwork to effective advocacy, and each came away with a firm appreciation for the importance of representation at every stage of an asylum case, in which refugees lack basic procedural protections. Fully aware of the high stakes involved in the case for their client and her family, they each called it a privilege to help her give the court a complete account of the threats she fled.

Said Ng: “It was difficult at first to navigate the language barriers and to balance the need to understand our client’s story against the need to understand the substantive law around asylum eligibility. But the further we got in the process, the more strongly I felt that genuine and effective legal advocacy requires a partnership with our client.”

USCRI’s Moss said she was impressed by the partnership the students forged with their client as well as their understanding of the case and the applicable asylum law. “Kate did an amazing job directing them and I thoroughly enjoyed being a part of this team.” Evans added, “Partnerships with local service providers are essential to the clinic’s success, and I was honored that USCRI entrusted us with this important case.”

Recalling that she was, early on, reluctant to commit to taking on a case that demanded a high level of intense focus over a short period of time and would be heard over spring break, Evans said she was delighted by her students’ superb performance.