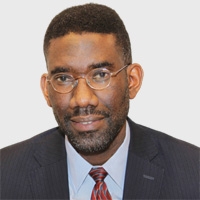 "I really can’t imagine having scoped out a better 25-year course of study for this job than the one I happened into.”

It’s probably an understatement to say that James Smith has a full schedule.

Consider the docket he oversees as chief administrative patent judge at the Board of Patent Appeals and Interferences (BPAI) at the United States Patent and Trademark Office (USPTO): almost 25,500 ex parte appeals from patent examiners’ decisions; expanded jurisdiction under the America Invents Act to hear certain contested pro­ceedings; and oversight of other matters delegated to him by the USPTO director. Aiming to cut the processing time of patent appeals by two-thirds, Smith, who assumed his post in May 2011 by appointment of then-Secretary of Commerce Gary Locke, also has a congressional mandate to hire 100 new BPAI judges by January 2013; by mid-February, he had presided over more than 80 candidate interviews and several dozen hires.

Yet Smith, who is in his fifth year as a member of the Law School’s Board of Visitors, sounds content as he describes his busy schedule, as well as the entire course of his career since his Duke Law graduation.

“I really can’t imagine having scoped out a better 25-year course of study for this job than the one I happened into,” he says of a career in intellectual property law that has included a clerkship at the U.S. Court of Appeals for the Federal Circuit, private prac­tice focused on patent litigation and licens­ing, oversight of global licensing for Nokia, and service as chief intellectual property counsel for Baxter International.

Having arrived at Duke Law with a degree in electrical engineering in hand and a sum­mer at the USPTO behind him, Smith acknowledges that the “gravitational pull” of intellectual prop­erty law was strong from the start. Even as he aimed to keep his options open, he made sure to take every class taught by Professor David Lange, then a virtual one-man IP depart­ment, and clerked both summers with Washington firms that specialized in the practice. He prac­ticed patent law with Finnigan Henderson for two years before being recommended by a Duke Law class­mate for a clerkship with now Chief Judge Paul R. Michel, who then was the newest judge on the Federal Circuit.

“Those years of practice and learning about litigation, patent law, and patent litiga­tion were a very necessary education before the clerkship,” says Smith, calling his friend’s good word and the clerkship itself life chang­ing events. “The experience that I gained on the court helped frame the years of my career that followed and certainly made me much more comfortable doing this job than I would have felt otherwise.” He still turns to Michel’s guidance with regularity, he adds.

Smith returned to private practice fol­lowing his clerkship. He was focusing on patent litigation at the district court level and serving as managing partner for a Dewey Ballentine office in Texas when he was asked to consider becoming global director of intel­lectual property licensing at Nokia in 2004. The mobile device manufacturer’s technol­ogy and attendant legal issues aligned well with his longtime practice, he says.

“It was just a fabulous job,” he says of his three-and-a-half years at Nokia. “I trav­eled constantly, participating in licensing and cross-licensing of technology for mobile devices, cell phones, computers — Nokia’s entire product set. And I got to conduct negotiations in countries all over the world, and to visit and participate in companion liti­gation. The entire time was a highlight reel.”

Smith calls his position as chief intellec­tual property counsel at Baxter International “equally fabulous.” Significantly, it gave him exposure to biotechnology patent and licens­ing matters, which has proven useful in his current position, he says.

Smith credits his career satisfaction with motivating his longtime volunteer service on the Duke Law Alumni Association and now on the Board of Visitors.

“Being granted admission to Duke Law was one of the best things that ever hap­pened to me,” he says, noting that such professors as Lange, Jerome Culp, Robert Mosteller, John Weistart, and Sara Sun Beale left a lasting impression.

“It was a fabulous place to go to school — the atmosphere of learning, the simultane­ously collaborative and competitive ethos of the school were remarkable. The fabulous opportunities for learning and the caring instruction I received made me feel perma­nently indebted to the school.”

Smith also praises the efforts of Dean David F. Levi and his predecessors to encour­age alumni engagement with Duke Law.

“Just the thrill of being invited back to participate in the Law Alumni Association motivated further interest to get involved.”