JD graduation speaker Wright ’19, a classically trained violist, hopes to turn his passion for music into a career in entertainment law 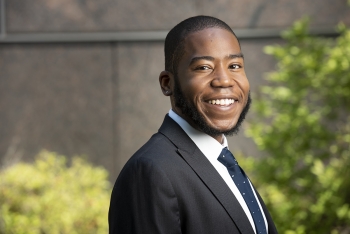 When Bryant Wright leaves Duke Law, there will be a conspicuous absence in the back corner of the Blue Lounge. Every morning for the past three years, Wright has set up shop there with his books, laptop, and speakers playing everything from Mozart to Jay-Z. For Wright, a classically trained violist, music helps him focus on his studies and process concepts.

“I started off studying in the library and thought, ‘It’s way too quiet in here. There’s no way I’m going to get anything done,’” Wright says. “Plus, here everyone knows exactly where to find me, Monday to Friday. I literally see everyone in the building.” Unsurprisingly, Wright’s classmates selected him to be JD speaker at the Law School Convocation on May 11.

Wright’s gregarious nature led him to law as a departure from a long-planned career as a professional musician. He started playing viola in fifth grade and studied the instrument through the Atlanta Symphony Orchestra’s Talent Development Program. That led to admission to Harvard University and the New England Conservatory, where he studied with the renowned violist Kim Kashkashian and earned both his undergraduate and master’s degrees in five years. But that last intense year of practice also brought a revelation.

“I decided, ‘I don’t want this life for myself. It’s way too isolating,’” Wright says. “I like working on teams of people, and much of the classical musician’s life is spending 60 to 80 hours a week by yourself in a practice room just to get on stage and, again, be by yourself in front of an audience. That’s not how I want to experience music.”

Now Wright is channeling that love of music into a career in entertainment law. This fall he will join Proskauer Rose in New York, where he spent his 2L summer, to work in its copyright, trademark, and false advertising litigation group. Proskauer is a heavyweight in the entertainment industry, representing such A-list artists as U2 and Madonna.

Wright calls his work on a First Amendment Clinic case that moved from intake to settlement over the course of two semesters the most rewarding experience of his time at Duke Law.

“Serving a client, working on details of one small part of something as part of a team – that dynamic you cannot get in a lecture, and those are the things that are probably the most difficult to learn for people when they actually get to a real job,” he says. “So you need to be prepping for that.”

And while First Amendment work is certainly relevant to his career path, Wright says he also jumped at the chance to work with Professor Jeff Powell, the clinic director, who taught Wright’s first year Constitutional Law class.

“An opinion looks like a piece of music to me and it can be digested the same way a piece of music can,” he says. “The way dicta come out in certain conclusions, it’s literally like looking at a cadence. Music flows and an opinion can flow like that in patterns.”

Wright is excited about returning to New York, where he spent three years in a Brooklyn classroom with Teach for America before arriving at Duke Law. He says the city is a good fit with his personality. “I’m not done with New York and New York is not done with me.”

But he’s not quite done with the Blue Lounge either. Wright plans to spend at least part of the summer in his familiar corner, playing music while he studies for the bar exam. Once he leaves, the corner will be empty – and quiet – again.

“You’ll have to find someone to replace me,” Wright says with a grin.