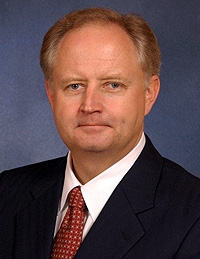 "When alumni give back to Duke Law, they support an educational process that helps sustain and renew the rule of law in a society."

“Of course, funding is necessary for excellence in higher education,” he says. “But when alumni give back to Duke Law, they support an educational process that helps sustain and renew the rule of law in a society. In this sense, giving is about something even larger than Duke and is a way of supporting the rule of law as an element of a good society. That is something that most of us believe in.”

A member of the Law School’s Board of Visitors, Knight has had a chance to observe various forms of societal order in the course of a diverse career that has literally taken him halfway around the world, most recently to Bahrain. Knight is chief operating ofﬁcer for Mumtalakat Holding Company, the investment arm for the Kingdom of Bahrain. Knight admits his professional journey to Bahrain did not originate from “well-formed goals and aspirations” as an entering law student. “I did, though, have an open mind, a fair amount of curiosity, and a willingness to try new things. And an understanding that law constitutes part of the framework by which society moves forward.” He gained exposure to Islamic traditions while clerking for the Supreme Court of Malaysia as a Henry Luce Scholar. “Malaysia was one of the Asian tigers at the time, so I had my ﬁrst experience with an emerging market there,” he explains. “And though Malaysia operates under a common law system, I had the chance to study Islamic law while there.”

Knight developed crisis management and sovereign debt experience from stints with Shearman & Sterling, where he worked on the restructuring of the Mexican sovereign debt, and JPMorgan Chase & Co., where he was a senior member of the team that restructured the Indonesian sovereign debt during the last Asian ﬁnancial crisis. He served in various legal and management positions while with JPMorgan Chase, landing eventually in Singapore as the chief operating ofﬁcer for South and Southeast Asia. In each position, he relied upon his sound legal education. “A rigorous legal education gives people the conﬁdence that they can step into difﬁcult situations and take on challenges even when there are unknowns,” says Knight. “If you have the proper training, it’s the methodology and the general problem-solving skills that allow you to work through the unknowns. Certainly I got that at Duke.”

In Singapore, Knight settled in with a rewarding and engaging community, participated in numerous philanthropic organizations and, in 2007, joined The Rohatyn Group, an emerging markets investment ﬁrm. “I was comfortable,” he says. “Then along came this opportunity to help build an investment ﬁrm for the Kingdom of Bahrain. The chance to build something from the ground up was simply too attractive to pass up.”

He describes his time in Bahrain as being both challenging and invigorating. “These are a culturally very rich people, very diverse, friendly, and gracious to outsiders who want to come in and help,” Knight says. But they also have reminded him of the limits to legal reasoning and what an adviser can do. “Be a good advocate, but understand that local problems should be solved locally, by the owners of those problems,” he suggests. “Purely imported solutions aren’t always solutions that are sustained.”

Knight’s education is ongoing, as he meets and connects with alumni around the world and engages with students in Durham. While at Shearman & Sterling, he interviewed Duke Law students. At JP Morgan Singapore, he had Duke student interns. More recently, Knight has helped Duke students seeking placements in the Middle East. During the political upheaval in Bahrain last spring, he was delighted to hear from a fellow alumnus in the region, Mohammed Al-Sheaibi LLM ’90, SJD ’93, who called to check in on Knight’s safety. “I’d met Mohammed, who is the general counsel for the Central Bank in Saudi Arabia, at a Duke alumni event in Munich,” Knight says. “His gesture says something about the Duke Law connection and also about a certain civility in this region. “I’ve just thoroughly enjoyed staying in touch with students and alumni and I’m still learning from some very interesting, welleducated people.”