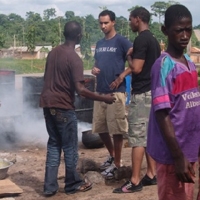 Jonathan Knight '11 has spent the last two summers in Ghana, working on projects to help improve the legal system and Ghanaians’ daily lives. His interest goes beyond the purely professional, or humanitarian; Ghana is his ancestral homeland, and his sister and several aunts and uncles live in Accra, its capital city.

After graduating from Fordham University, Knight spent a summer with the nonprofit Project Reconciliation Ghana. Along with other Fordham students, he worked with the New York law firm of Feerick Lynch MacCartney to create a seminar for Ghanaian law students on dispute resolution techniques.

“In Ghana, the economy is kind of booming, but there is still only about one lawyer for every ten-thousand people,” he says, noting that, as a result, poor Ghanaians often can’t afford lawyers to settle small land disputes and other legal matters. “Dispute resolution is a good alternative for people who can’t access the legal system directly.”

During his first year at Duke Law, he was inspired to take on a different project — distributing a unique biofuel cooker developed by a German engineering company.

“We’re hoping to distribute it to about 200,000 people in Ghana — that’s the plan,” Knight says. “We’re working with community organizations, churches, chiefs, to distribute this thing.”

Knight credits a panel discussion held during the Business Law Society’s 2009 ESQ career symposium, with sparking an idea; panelists Douglas Wheeler ’66 and Kodwo Ghartey-Tagoe ’88, a native of Ghana, furthered his interest in carbon credit markets, and took the time to talk with him about the concept afterwards.

He was still thinking about carbon credits when he met with a German business student from Columbia University. “He was working with a German company, trying to get these carbon-neutral stoves distributed in Ghana,” Knight says. “He’d just done a feasibility study there. He basically determined that no rural Ghanaian could buy the stove, which costs about $50. So I said, ‘Maybe you’re looking at it the wrong way. Look at it from a carbon-credit angle: Carbon credits are selling at $20 a credit and your stove gets three credits. You would be turning a profit.’ So we’ve been working on a plan to give away all the stoves for free and make money off the carbon.”

A trip back to Ghana last summer convinced him of the need for the carbon-neutral stove that is fueled with vegetable oil. “Most people there cook with carbon-intensive fuels like firewood and charcoal,” he observes. “They’re laboring over these fumes, and they’re hauling wood. Many Ghanaians cook using palm oil, so with this stove they could reuse and recycle the palm oil. It would make life a lot easier an, ultimately, it’s good for the environment.”

His naturally entrepreneurial interests have been stoked by one of his Duke Law professors, Knight says. Bill Brown ‘80, a visiting professor of the practice of law, joined the faculty after a long Wall Street career that included leadership positions at Goldman Sachs & Co., AIG International, and Morgan Stanley, and now has two startup companies that develop and commercialize green technologies, among others. Brown has offered Knight some advice on how to proceed with his plan.

“Duke is a good place to learn entrepreneurial skills,” he says.