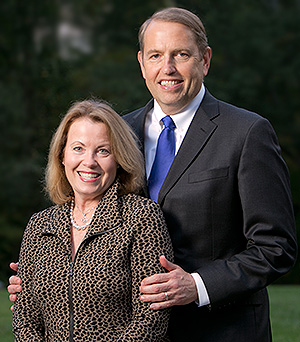 Karl Leo ’83 didn’t plan on becoming a business lawyer when he graduated from Duke Law. But four years later, when he hung out his shingle after returning home to Huntsville, Alabama, one of the first calls he got was from a small family-owned roofing supply company he had represented in litigation matters that now needed an outside general counsel.

“I didn’t know what that was,” he said. “I thought of myself as a civil litigator. Being a business lawyer – focusing on transactions – wasn’t something that I thought deeply about.”

“I give a lot of credit to Duke Law for building the foundation for me to be able – three or four years out of law school – to take on the things that I did,” he says. “I had a confidence level, and I think Duke was a big part of that.”

This fall, Karl and his wife, Fay, are showing their gratitude with a $1.25 million gift to the Law School to endow a new faculty chair in business law and entrepreneurship.

“A good number of graduates will end up practicing business and transactional law, as I did,” said Leo, a member of the Duke Law Board of Visitors. “That’s an area that the Law School needs to be as deep as it possibly can be.”

“We are extraordinarily grateful to Karl and Fay Leo for their generosity and commitment to Duke Law,” said Dean David F. Levi. “Their gift will deepen what is already one of our strongest fields of teaching and scholarship, and one that is of vital importance to our students and the profession.”

“Duke is really looking at business as an integrated part of the law at the beginning of students’ law practice,” said Stanley Star. “It is exciting and interesting to see the Law School undertake these initiatives.”

Leo said he would not have come to Duke had it not been for the generous financial aid provided by previous donors.

While completing an undergraduate degree at the University of the Redlands in California, Leo took the LSAT and designated five of a possible six law schools to receive his scores. On the advice of a college friend, he gave the last spot to Duke, although he didn’t seriously consider it until an impromptu trip to campus on the way home from visiting another school. Two students took him to their contracts class and then out to lunch.

“It was as if a red carpet was rolled out to Towerview Drive,” he said.

Leo told then-dean of admissions Charlie Howell that he was impressed by the close-knit community at Duke but that he didn’t think he could afford it. Howell told him they would work something out.

“I think the letter beat me home,” he said of the offer of a full tuition scholarship from the Parkinson family named for John Parkinson.

At Duke, Leo was an editor of the Duke Law Journal and coached Duke’s undergraduate debate team. He also became close with C. Allen Foster, who taught construction law, and following a clerkship on the Alabama Supreme Court, spent three years at Foster’s Greensboro law firm. But his father’s death during his clerkship year had him pining for home.

In 1987, Leo returned to Huntsville and opened his practice. He soon found himself handling real estate leases and purchases for ABC Supply, representing the company in loan negotiations, working out the details of acquisitions, and managing lawsuits.  He has served as ABC’s chief lawyer ever since. Today, ABC has grown to more than 460 locations nationwide and nearly $5 billion in annual sales.

In addition to his role with the company, Leo also serves as an adviser to a host of related companies owned by the same family in industries ranging from real estate and insurance to nuclear medicine.  He also founded and runs Leo Law Firm, LLC, an eight-lawyer boutique business law firm in Huntsville, Alabama.

“When you do the kind of job I do, every day is a new challenge, there’s something new we talk about, something different, and that’s the exciting part of it,” he says.

It has also led Leo to want to help expand the opportunities for students to prepare themselves for corporate and transactional work: “I think the greater endowed the faculty, the greater the course offerings, the greater practical offerings, the better prepared students will be for a career in business law.”

The Karl W. Leo Professorship is the latest of eight professorships secured at the Law School as part of the Duke Forward campaign, the seven-year, $3.25 billion university-wide fundraising initiative that supports priorities across Duke’s 10 schools and units, Duke Medicine and a range of university programs and initiatives. Duke Law School’s $85 million campaign goal focuses on adding faculty positions and research funds, expanding student financial aid packages, expanding and enhancing academic and practical programs, and growing the Annual Fund.  As of Nov. 17, the Law School had raised $69.3 million, or about 82 percent of its campaign goal.