In addition to keeping up with her law classes, Katherine de Vos Devine found a lot of time last year to page through a lot of magazines. “I have literally looked at every issue of The Economist published since 1999,” she says, laughing. But de Vos Devine wasn’t reading the articles in the venerable weekly; she was checking out the cartoons.

A candidate for an MA in art history in addition to her JD, de Vos Devine is one of eight curators of “Lines of Attack: Conflicts in Caricature,” an exhibition of political caricature that will open at Duke’s Nasher Museum in February. The show takes a comparative look at works produced in France between 1830 and 1835 and those of the contemporary era, most notably images of recent American presidents.

The reign of Louis-Phillippe I (1830 to 1848) produced what is considered the golden age of political caricature, explains de Vos Devine. Artists and publishers like Honoré Daumier and Charles Philipon, respectively, routinely flouted strict censorship laws that prohibited images intended to insult the king, she says. These individuals risked fines and imprisonment by offering pointed commentary through illustrations that incorporated scatological humor, puns, and symbols; Daumier’s trial over his published illustration of the king as a gluttonous giant was notorious in its day.

“They were very insightful in using symbols to make strident and substantive commentaries — in many ways providing a much better commentary than words alone ever could,” notes de Vos Devine. That, she observes, was what the regime feared: Images could incite unrest among illiterate citizens who might be oblivious to written commentary.

A lot of political caricatures published in the United States during the George W. Bush administration are respectful by comparison, she says, in spite of the strong First Amendment protections given to political speech. “Was it a matter of self censorship? Is it because newspaper conglomerates are particularly restrictive regarding what editorial cartoonists can and cannot put on the page? Or is it because American audiences aren’t interested in and don’t tend to respond well to strident, offensive caricature? There are a lot of outstanding questions.”

De Vos Devine’s curatorial essay for the exhibition posits that cultural norms, in fact, can moderate political dissent more effectively
than censorship laws. While her intent on entering law school after two years as a tax paralegal at Cadwalader in New York was to forge a career in art law, her work on the exhibition has shown de Vos Devine how art history and law might combine in a satisfying academic career.

“For an art historian, curating is about creating environments for learning,” she observes. “When you walk through a museum show you are interacting with art works, probably talking with whoever is with you. But someone has shaped those conversations for you, placing images on the wall in an order that will stimulate those conversations. I like that three-dimensionality.” A combination of teaching, writing, and curating
will likely allow her to “change more minds about how art should be seen and how artists should be treated” than would work as a solo practitioner, she says.

Law is an essential part of the mix, given her longstanding interest in the scope of artists’ rights, adds de Vos Devine. It is essential, too, to the academic research she is interested in pursuing. “Historical accounts of cases written by non-lawyers don’t seem to probe the actual meanings of the decisions and their impacts on the artists that followed,” she says. She also finds herself increasingly drawn to the nexus between art and intellectual property and views that as a rich area for “useful” future scholarship.

Duke Law has been the perfect place to blend her interests, de Vos Devine says. “No other school would let me do what I’m doing — asking highly conceptual questions, writing multidisciplinary papers, and doing the curatorial project. There was definitely no other law school that was enthusiastic about [my] prior interest in a particular field.”

From the start, when she would pepper her 1L contracts professor, John Weistart ’68, with complicated questions about artists’ contracts, she says she has found both guidance and support. Deborah DeMott, the David F. Cavers Professor of Law and a significant art law scholar, has been particularly helpful.

“One of the great things Professor DeMott taught me is that art law is not a field but a collection of issues that apply to a certain set of clients,” says de Vos Devine, who worked as DeMott’s research assistant. “I’m not looking at an art law problem — I’m looking at a contracts problem or a tort problem or a fraud problem. These are all the same problems that happen to any other kind of client, except these clients happen to be artists.” 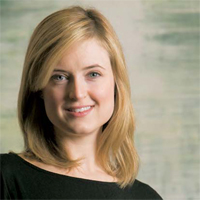