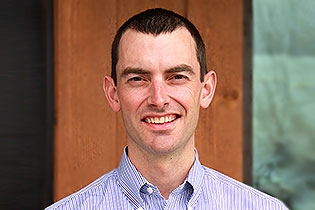 Reed Watson credits his upbringing in the mountains of South Carolina with igniting his passion for environmental conservation. But as an economics major at Clemson University, he noted that his professors promoted markets as engines of economic growth and prosperity in all areas except the environment.

Finally, one professor said that markets could, in fact, be harnessed to promote environmental quality if property rights to environmental resources are clearly defined and transferable. This concept of “free market environmentalism” came first as a welcome revelation to Watson and then the cornerstone of his professional career.

Watson is now the executive director of the Property and Environment Research Center (PERC), a nonprofit think-tank in Bozeman, Mont., that applies market principles and property rights approaches to a range of environmental challenges, including conservation of wildlife habitat, marine fisheries management, ecosystem services, and climate change. He has recently testified on Capitol Hill on the issue of stewardship of public lands and submitted written testimony to Congress on how water markets can be used to address scarcity in the face of record California drought.

“For me, learning that you could actually combine economic freedom with environmental stewardship eased the tension between these things I cared deeply about,” Watson says, recalling that undergraduate class. The professor happened to be a PERC research fellow, and Watson immediately signed up for a weeklong seminar on free market environmentalism the group puts on for undergraduates. “I came out to Bozeman and just ‘swallowed the hook,’ as we say out here, and was begging for an internship at the end of the week.” The internship turned into a yearlong research fellowship that he completed before returning to school.

While many PERC-affiliated researchers are PhD economists, Watson chose to combine a master’s degree in environmental economics with JD studies at Duke, seeking, he says, a practical perspective on how resources are actually managed — through law, regulation, and contracts. Taking part in the Environmental Law and Policy Clinic in its first year of operation was one highlight of his time at the Law School, he says. “It was useful for me to engage in a lot of different real-world projects through the clinic,” he says. “We wrote a manual on conservation easements, offering landowners an overview of how they work and a way to determine whether they make sense in any given circumstance.” It was both a practical and rewarding experience, he says.

After graduation, Watson returned to PERC as a research fellow and director of its applied programs, spending his first year commuting to Washington, D.C., learning about nonprofit management as a fellow at the Koch Charitable Foundation. In addition to training programs for conservationists, resource managers, and environmental entrepreneurs, he has pursued a research agenda focused on water and wildlife.

“With water and wildlife, you have public resources that often flow across private property,” he says. “I have likened this situation to a split estate for minerals, where you have a surface owner and then a different owner of subsurface materials. How do we think about managing those resources while respecting, pursuant to the Constitution, the property rights of the landowners?”

Watson presented a scholarly article on the matter at the 2012 Duke Environmental Law & Policy Forum’s conference titled “Conservative Visions of Our Environmental Future.” And in addition to numerous other law review articles, he is the co-author of Tapping Water Markets (Routledge, 2012), which explores the way those markets can be implemented and improved.

Since graduating from Duke, Watson has stayed in touch with Professor James Salzman, a scholar of environmental law who has presented on such topics as ecosystems services markets at PERC conferences. Salzman said that Watson possesses “a rare combination of intellectual integrity, curiosity, and entrepreneurship” that was evident from his earliest days as a law student. “In a community known for intellectual curiosity, Reed stood out from the start,” said Salzman, who is now the Donald Bren Distinguished Professor of Environmental Law and Policy at UCLA’s law school and the Bren School of Environment at the University of California, Santa Barbara. “He wanted to ask big questions about environmental protection that challenged conventional thinking. Why don’t we rely more on markets? How much potential lies in private initiatives. Whenever he raised his hand in class, I looked forward to hearing what he was going to say. I’m not at all surprised at his rapid rise to the leadership of PERC.”

Watson is increasingly focused on public lands management as the National Parks Service approaches its 2016 centennial. In April testimony before the Senate Committee on Energy and Natural Resources and subsequently in a New York Times op-ed, he argued that the United States should stop acquiring lands for national parks and forests until it fixes crumbling infrastructure on the public lands it already has.

With the federal Land and Water Conservation Fund set to expire in September, Watson wants lawmakers to reform its authorizing statute to prioritize repair of roads, trails, campgrounds, and wastewater systems in parks like Yellowstone, Yosemite, and Grand Canyon rather than increasing federal holdings as President Barack Obama has proposed, and as many of his predecessors have done.

“Conservation, at its core, is about the care and maintenance of the land,” Watson wrote in his April testimony, citing a park service estimate of $11.5 billion in maintenance needs. “Using the LWCF to acquire additional land — without first addressing the billions of dollars in deferred maintenance on the existing federal estate — will threaten the ecological health, public accessibility, and economic productivity on these precious lands.” Watson proposes allowing federal land managers to collect and retain user fees on site to help finance essential repairs and maintenance costs.

Aside from his own research, one of Watson’s recent initiatives involved restructuring PERC’s Enviropreneur Institute, a program that empowers environmental entrepreneurs. Rather than attempting to teach professional conservationists to act entrepreneurially, Watson refocused the program on helping active entrepreneurs capitalize on profitable conservation opportunities.

“The first step was to replace myself as the program’s director with someone more experienced in business incubation,” he said. “Luckily, one of our alumni, Neal Doyle, is the operations director at Harvard’s Innovation Lab, so that was an easy choice.”

According to Watson, the change in leadership and focus is already paying dividends in the form of case studies. “We are bringing on companies that may have already gone to market with a product or technological innovation that facilitates resource conservation,” he says. In addition to a revamped curriculum and mentoring, PERC is offering $15,000 in seed-funding for the most promising initiative. “The value to PERC is in the proofs of concept, and those are exactly what we need to advance free market environmentalism.”

His own outdoor experiences as a boy might have drawn him to conservation, but it is the next generation that inspires Watson’s career as a free market environmentalist.

“My wife, Kathryn, and I met at the Nicholas School of the Environment, so it’s hardly surprising that we pack our 1-year-old son with us all over the Montana mountains.” Their conversation inevitably turns to the conservation issues and whether their son will inherit a healthy and productive environment, or not. Watson is optimistic. “I think we can harness property rights and markets to turn political environmental fights into profitable conservation opportunities, and that would change the entire dynamic.”