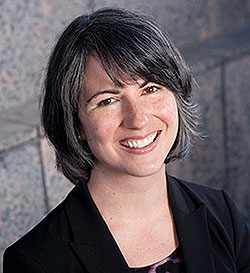 Professor Margaret H. Lemos has been elected to membership in the American Law Institute (ALI).

ALI members are distinguished lawyers, judges, and legal academics who produce scholarly work to clarify, modernize, and otherwise improve the law through publication of the highly influential Restatements of the Law, model statutes, and principles of law. The 45 newly elected members were confidentially nominated by their peers, vetted by the group’s membership committee, and elected by the ALI Council, according to an Oct. 24 press release from the organization.

“One of the most exciting aspects of being President of the ALI is meeting some of today's most important and inspiring legal minds as they are elected into The American Law Institute,” ALI President Roberta Cooper Ramo said in the release. “I look forward to having the opportunity to work alongside these new members in continuing the ALI's efforts in clarifying the law.”

Lemos, the Robert G. Seaks LLB ’34 Professor of Law, is a scholar of constitutional law, legal institutions, and procedure. Her scholarship focuses on the institutions of law interpretation and enforcement and their effects on substantive rights. She writes in four related fields: federalism; administrative law, including the relationship between courts and agencies; statutory interpretation; and civil procedure. Her articles have been published in the Supreme Court Review as well as in the Harvard, New York University, Texas, Minnesota, Vanderbilt, and Notre Dame law reviews.

She was awarded Duke’s Distinguished Teaching Award in 2013, and students at Cardozo voted her the “best first-year teacher” in 2010 and in 2011.

The membership of ALI includes 23 Duke Law faculty and one Sanford School of Public Policy faculty as well as more than 50 Duke Law alumni. Dean David F. Levi is a member of the ALI Council and the organization’s president-designate.