Hot button issues the Court will take up during the October 2021 term include abortion rights and gun rights. 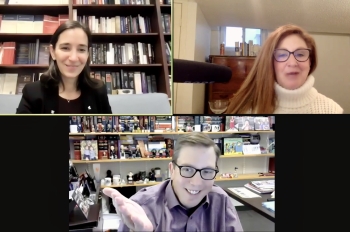 A panel of legal analysts discussed key cases from the U.S. Supreme Court’s last term and previewed its October term docket, including a Mississippi case challenging abortion rights and a Second Amendment case that could have far-reaching implications for how courts decide future gun rights cases.

The discussion, held virtually Sept. 13, also covered the Court’s increasing and controversial use of the “shadow docket” to rule on issues such as Texas’s new six-week abortion ban, and why, in their view, the media so often fail to cover decisions that have crucial impact.

The panel included Dahlia Lithwick, a former lawyer and the longtime courts and law reporter for Slate, and Stephen Vladeck, who holds the Charles Alan Wright Chair in Federal Courts at the University of Texas School of Law and is a contributor to CNN. It was moderated by Professor Marin K. Levy, director of the Program in Public Law, which sponsored the event.

The new term begins October 4 when the Court resumes in-person oral arguments after a year of hearing arguments by teleconference. It will be the first full term for Associate Justice Amy Coney Barrett, whose confirmation last October swung the Court to a 6-3 conservative majority.

The Court’s merits docket includes several hot button cases, including New York State Rifle & Pistol Assn. v. Bruen, which challenges New York’s public carry law. Its ruling could immediately impact six other states with similar licensing requirements, but also may have implications for the methodology by which courts evaluate future Second Amendment claims if the Court shifts its approach to one favored by some of the conservative justices that bases the constitutionality of gun laws on text, history, and tradition.

Another closely watched case is Dobbs v. Jackson Women’s Health Organization, an appeal of a lower court ruling throwing out Mississippi’s 15-week abortion ban. Dobbs marks the first time the Court will rule on the constitutionality of a ban on abortions for pre-viable fetuses since 1973’s landmark decision in Roe v. Wade.

Dobbs was overshadowed recently by another abortion ruling – the Court’s refusal to block a controversial new Texas law that took effect Sept. 1 and prohibits physicians from performing an abortion after a fetal heartbeat has been detected, at about six weeks of pregnancy. The Court released its ruling as a short, unsigned emergency order just before midnight on Sept. 1 – an example of the “shadow docket” of cases that are presented with no oral arguments and little briefing and decided in short opinions that offer little transparency into the justices’ reasoning.

“The term refers to everything the Court does that isn’t a merits decision,” Vladeck explained, noting that its use of the shadow docket to resolve questions of law has increased markedly in recent years.

The Court granted emergency relief 20 times this term, compared to an average of 5.7 per year during the first ten years of Chief Justice John Roberts’s tenure, he noted. At the same time, the Court heard oral arguments for 56 cases during the last term and 53 the term before that – the two lowest totals since the Civil War.

“What’s different in the last five years is how often we’re seeing these kinds of orders, how much they’re doing substantively, how the Court itself is treating them as precedential, and how divisive they’ve become,” Vladeck said.

“The Court is doing a lot more of it while the merits docket is decreasing. So in every way that matters, the shadow docket is becoming a bigger, a larger, and a more important part of the Court’s work.”

“It got really very little attention at the time and I think that was a far bigger harbinger of things to come than any of her votes in the election cases,” Lithwick said.

A misleading narrative of “a term that wasn’t”

Levy observed that many newspapers characterized the Court’s 2020 term as “a term that wasn’t,” constructing a narrative that because the justices did not throw out the Affordable Care Act and declined to hear a gun rights case, Barrett’s appointment was less consequential than had been expected. In fact, the ACA challenge had been thrown out for lack of standing and the Second Amendment case was dismissed as moot because the ordinance in question had been rewritten, so neither case was considered on its merits, she said.

“Where I think people started to realize that the wheels were coming off that narrative ... was with the Brnovich v. Democratic National Committee case,” Levy said.

That case involved two Arizona policies challenged as racially discriminatory: a criminal statute banning third-party ballot collection and a regulation invalidating ballots cast in the wrong precinct even if they included votes for state or national races. The Court upheld both measures in what Lithwick called “a strikingly partisan decision.”

“Essentially we had a 6-3 case where [Justice] Alito, writing for the court in a very, very technical and convoluted way ... essentially did away with one of the only remaining sections of the Voting Rights Act that could be used to effectuate voter protection,” she said. “This was coming in the midst of the biggest wave of voter suppression laws that we have seen in this country.”

Both Lithwick and Vladeck chided the press and other legal analysts for missing cases with big impact from the Court’s last term. Instead, they said, media coverage focused on headline-grabbing cases like Mahanoy Area School District v. B. L., in which the Court decided in favor of a teenager kicked off a cheerleading team for her profane social media posts.

“The cursing cheerleader case will have far less of an impact on First Amendment jurisprudence than Tandon v. Newsom, the Friday night 5-4 ruling that struck down California’s restrictions on in-home gatherings,” Vladeck said.

In that case, the Court again issued an injunction against a state’s COVID-19 restrictions in favor of applicants who wanted to hold a religious meeting. While major media paid little attention to it, Slate’s coverage said it “radically altered the law of religious liberty ... vastly expanding the government’s obligation to provide religious accommodations to countless regulations.”

“Some of those incredibly polarized and polarizing cases are about incredibly technical things,” Lithwick said. “When October comes and we in the press corps are rooting around for a story we want to tell, it’s just never going to be Section Two of the Voting Rights Act. We like the swearing cheerleader. We really like cases that have a good guy and a bad guy and a hero and some family where we can fly out to Kenosha and interview them.

“Doctrine isn’t going to turn or rise and fall, ever, on the sweet-faced Kenosha plaintiff. It’s always going to be these incredibly technical voting systems, incredibly technical habeas systems, and those are the things that, in part because of how media has changed, we have just given up trying to explain.”