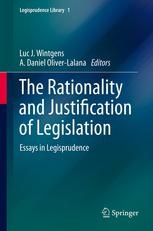 Professor Luc Wintgens, of the University of Louvain, will give a talk and answer questions on a chapter from his book titled “The Rational Legislator Revisited: Bounded Rationality and Legisprudence.”  This event is co-sponsored by the Center for International & Comparative Law.  Lunch will be served.

For more information, or for a copy of the chapter, please contact Ali Prince.

In this talk, the classical view of the rationality of the legislator is challenged.  Although it operates as an assumption in legal interpretation, it is often argued that legislators are not omniscient or that they are more rational than other agents.  Like any other agent or decision maker, they have limited skills and computational capacities, and act under time constraints.  These limitations affect the way legislation is created.  The thesis of Wintgens' lecture is that legislators are boundedly rational agents who make at best "satisficing" norms and not optimal ones.  To legislate rationally involves taking into account these limits of rationality.

Professor Wintgens is a Professor of Comparative Law and European Legal Theory at the Flemish speaking part of the University of Louvain.  He was previously a professor at the Flemish part of the University of Brussels and a visiting professor at a number of European universities, including several times at Paris II.  He has also spent several semesters as a visiting scholar at Harvard. Wintgens was educated at the University of Louvain and Paris II and eventually got a doctorate in law from Louvain and a doctorate in philosophy from the University of Brussels. His most recently published book, "The Rationality and Justification of Legislation: Essays in Legisprudence" will soon be available in the United States.

Professor Anne van Aaken of the University of St. Gallen will give a talk and answer questions on the topic of “Behavioral International Law and Economics.”  This event is sponsored by the Center for International & Comparative Law.  Lunch will be served. - See more at: http://law.duke.edu/news/anne-van-aaken/#sthash.0gvdSPIe.dpuf