Margaret Spring ’92: An advocate for ocean conservation finds a unique platform at the Monterey Bay Aquarium 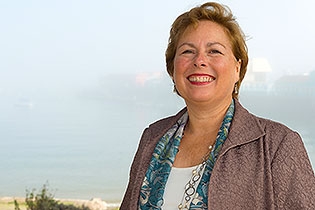 Margaret Spring has spent the bulk of her career engaged in marine, coastal, and fisheries policy and advocacy. A member of the Class of 1991, she postponed graduation by a year to take the prestigious Sea Grant fellowship and complete an externship in Washington. After practicing for seven years as an environmental attorney at Sidley & Austin, she spent the next seven focused on policy and legislation as counsel, and later as general counsel, to the Senate Committee on Commerce, Science, and Transportation. In 2007, she left Washington to lead The Nature Conservancy’s California coastal and marine program, and from 2009 to 2013 was an appointee of the Obama Administration, serving at the National Oceanic and Atmospheric Administration, first as chief of staff, and then as principal deputy under secretary for oceans and atmosphere.

In 2013, Spring returned to California and joined the Monterey Bay Aquarium as vice president of conservation science and chief conservation officer. Still working to inform policymakers on problems such as unsafe and unsustainable fishing practices, the global trade in shark fins, and threats to the imperiled Pacific bluefin tuna population, her position provides a platform for reaching the more than 2 million people who visit the aquarium each year, as well as the large number of those who follow the aquarium through a variety of media.

Spring, who serves on the Ocean Studies Board of the National Research Council, as well as on the Board of the California Ocean Science Trust, spoke with Andrew Park of Duke Law Communications about the aquarium’s unique role in informing and shaping a critical public dialogue.

Andrew Park: How is this job different from your prior roles?

Margaret Spring: The exciting thing about this job is that it allows me to use my experience with government, private sector, nonprofits and with law. The aquarium is both a business and a nonprofit. It is an educational institution and a conservation organization. And the aquarium plays this unique blend of roles, both in the community and in the world. One of the challenges we had in government was the lack of excitement or enthusiasm or even inspiration for people to really act on behalf of the ocean. Because a) they don’t often know what to do, b) the process is confusing, and c) the ocean isn’t very well known and it’s significance to everyone’s lives is very hard to communicate. What the aquarium allows us to do is think about how to connect people — decision-makers, scientists, and businesses — in an interesting way that’s more welcoming and big tent than maybe you’re allowed to do in any of those jobs I’ve had before.

Spring: It is. We serve the whole population and so we have to think about how we retain people’s trust and speak with confidence and yet make a complicated topic understandable and actionable by individuals and groups. An NGO doesn’t have to work that way. Advocacy groups are really focused on pushing policymakers to change. We are bringing everyone else along, but also bringing those public voices more closely to the surface.

Park: Since you arrived, the aquarium has expanded its conservation policy and science expertise, largely from Washington. It seems remarkable to have so many people with such depth of policy experience.

Spring: We advertised all of those positions publicly and there was tremendous response. But what was amazing to me was how other people who came from Washington or had worked in government were really excited about the prospect of engaging with – and motivating – a different audience.

In recognition of the immensity of the challenges to the oceans, we strengthened our Conservation and Science team’s role at the aquarium, which is to take action for the oceans. One example is — this was before my time so I can’t take credit for it — we cosponsored the shark fin trade ban legislation here in California (and in California, an NGO can sponsor a bill, which was new to me). We did that with the Humane Society, which some would regard as an unlikely partner, and we worked with Asian-American lawmakers, and we were able to bring these groups together because the aquarium enjoys a great amount of trust here in the state of California. So that kind of combination of supporters really helped get the bill over the hump. But that was a big decision for us to make. That wasn’t something that we take lightly, that kind of an advocacy role.

Park: How do you know where the line is that you can’t cross as an institution like this?

Spring: First of all we have to make sure that it’s something that we feel we have expertise in or have earned people’s trust in. And secondly, it has to be a role that only we can play. There are lots of other groups that can take action on issues, and we don’t need to be everywhere and do everything. So we think about what’s our specific voice, what’s our specific expertise, what is it we can bring to bear, and is it something that falls within the aquarium’s mission statement and our leadership is comfortable with. For example on seafood, our policy and advocacy work is only on behalf of making more information available to the public about seafood and then helping enforce the law to reward the good performers —basically tightening up the system.

Park: What role do you see the aquarium playing in the climate change debate?

Spring: I think that the opportunity for us is in highlighting the importance of dealing with the climate issue because of the ocean impacts and their relevance to us as people — what we eat, what we breathe. For example, we banded together with a number of aquariums and won some federal grants to establish a network [for] interpreting climate change and the environment. Out of that came a website called climateinterpreter.org, and it helps interpreters at these public institutions find ways of talking about climate and answering questions in a simple and understandable way. It’s really helping to raise awareness and understanding that the climate story is really about the oceans. People think it’s about models and climate scientists fighting. It’s not. It’s about what you eat. And it’s about whether you’ll be able to breathe. We really reach out to millennials and the new Hispanic majority here in California. We really think about the next generation, probably far more than politicians or anyone else does, because that’s who comes to the aquarium.

Another one of the things we’re doing is we’re working with the city of Monterey and the city of Pacific Grove. The state of California is really active and ahead on climate and on planning for sea level rise and climate change. The governor’s office issued guidance from the coastal commission for each county and city to develop sea level rise mitigation plans. But it was very clear when you talk to NGOs in the area that were trying to help that making the connections in the local government in a way that was organized and supportive was challenging for them. We’re kind of the glue that’s helping these conversations move forward. We can bring people together and make climate-change planning a little more real for people. We’re a local institution, we are well-known, we’re one of the biggest employers in the area. We have that ability and we should be doing it and so we’re really pleased to play that role. An NGO doesn’t have that. Bricks and mortar makes a huge difference.

Park: How are you received now by lawmakers and policymakers?

Spring: Everyone is always willing to see you. You feel very welcome in people’s offices. They want to know what you have to say. I think they perceive us as the voice of people. They know that we’re a conservation-oriented aquarium but with a strong ability to transform people’s minds to love the ocean. It allows us to be not about problems but about solutions. You really come in with a lot more goodwill and happiness than I’d experienced before.

Spring: Yes I do, even internationally. I’m on the U.S. delegation to the negotiations on Pacific bluefin tuna. I also just returned from speaking in Japan at a government conference (on Japan’s national “ocean day” holiday) about sustainability in the ocean. The aquarium’s reputation is strong even outside of the United States and we can be a positive and welcoming place to have international conversations. We are even hosting an international conference on bluefin tuna conservation and science in January that is co-sponsored by both the U.S. government and the Japanese government. I feel like I’m an adjunct to helping conversations in a way I never really was before.