On Dec. 14, 2010, Martina Lewis Bradford was appointed deputy sergeant at arms of the United States Senate by Senate Majority Leader Harry Reid, D-Nev. The Office of the Sergeant at Arms is the chief protocol office, chief law enforcement office, enforcer of the Senate Rules of Procedure, and overseer of all operational, technological, facility and security matters in the U.S. Capitol and all U.S. Senate offices.

Lawyer, businesswoman, public policy specialist and leader, Martina Lewis Bradford has established an enviable career for more than the last 25 years in order to ascend to this premier position. A member of the Law School’s Board of Visitors since 1994 and life member since 2000, Bradford's extraordinary career reflects an unusual movement between the highest and best positions in legal practice, business, and government service.

In the years since her Duke Law graduation, Bradford has served as legal counsel to two U.S. Congressional Committees, finance counsel for the Interstate Commerce Commission, corporate officer for two Fortune 50 corporations, a partner in one of the most influential Washington, D.C. - based international private law firms, and most recently as a senior adviser to Senate Majority Leader Reid.

A native of the nation's capital, Bradford says her interest in a law career began when, as a teenager, she held summer jobs at the Department of Defense and the Department of Transportation. After graduating with a degree in economics from American University, Bradford chose Duke Law School because of its academic reputation and the number of its alumni in the D.C. legal and governmental communities.

“The legal training at Duke Law School is very broad and I knew it would give me the fullest range of career possibilities,” she recalls, admitting that “Duke's basketball prowess wasn't lost” on her either.

Bradford explains that, “the most important skill I learned at Duke Law was the standard of excellence in legal and analytical practice and problem solving, and how to replicate such excellence in myself and in my work. Once confident that I was capable, I reached the conclusion that I could work in any arena — and I have.” Thus Bradford’s pursuit of multiple interests in government service. The political process, the Constitution and the fruits of the highest quality legal analysis were crystallized at Duke Law, she says. “Professor [William] Van Alstyne had a major impact on me — his classes were interesting and the cases so varied and deeply steeped in history, and in each instance he demanded the highest quality of legal analysis and writing.”

Bradford feels that her training at Duke Law School provided the basis for pursuit of a career path that is neither linear nor traditional,” she says.

“My career has been not so much an endeavor to be at the top of the heap at any given organization, but rather a strategic journey, being open to opportunities and activities in which I can make important and critical contributions with integrity and a real sense of public service.”

After passing the bar, Bradford became attorney for the Finance Division of the Interstate Commerce Commission, eventually becoming chief of staff and counsel to the Commission's vice chairman.

Former Republican counsel to a Senate Subcommittee and then to a Committee of the House of Representatives, Bradford entered the corporate world at AT&T around the time the government began to actively seek to reorganize the giant telecommunications corporation.

''I'd always been interested in the intersection of public policy and business, and the experience was tremendous," she recalls. "We didn't welcome AT&T being dismantled, but since it was coming, we worked tirelessly to assure that the end result was workable from both consumer and corporate perspectives. We were on the Hill every day, explaining to the government how the different parts of AT&T worked and the best way to disaggregate it."

In 1996, Bradford, who earned a certificate of advanced management at Duke University’s
Fuqua School of Business in 1990, moved from AT&T to its spinoff, Lucent Technologies, where she became corporate vice president for Global Public Affairs.

In 2000, she became partner at Akin Gump Strauss Hauer & Feld in Washington, where she focused on public law and policy lobbying. Active in a variety of professional, arts, and philanthropic organizations, the avid golfer was newly retired from the firm and playing abroad in 2006 when she received a call from Reid’s office. He asked her to serve as a senior adviser to assist him in establishing more diversity in the Senate workforce.

“I hung my shingle, established a database and began to attract minority candidates from everywhere,” she says. “Whenever there was an opening in the Senate for a professional position, we supplied strong minority candidates to be part of the selection process. We were very successful in those efforts.”

Though times are tough and government leaders are often viewed with skepticism,
Bradford says she's impressed by what she sees on Capitol Hill. “The men and women I interact with every day take their work very seriously. They come to work and go about the business of making good decisions for the country. Though they may differ on what those decisions are, they work hard and do a good job.

“The Office of the Sergeant at Arms provides a unique opportunity to combine the many skills and lessons I have learned thus far in my diverse legal, government and business career,” she adds. “Law enforcement, major administration of a branch of government and its facilities, dealing with high ranking officials and dignitaries from all over the world, responsibility for telecom systems and last, but not least the opportunity to serve the most distinguished body of decision makers in the United States —all of this and being the official escort of the vice president, ‘ain't too shabby for a local girl’ who graduated from one of the toughest high schools in town. And I will forever be indebted to Duke University School of Law for the opportunity and training that I received there.”

Bradford, a member of the regional USGA board and the Robert Trent Jones Golf Club board, jokes that her biggest personal challenge now lies in maintaining her handicap while working as hard as her new job requires. 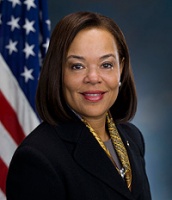