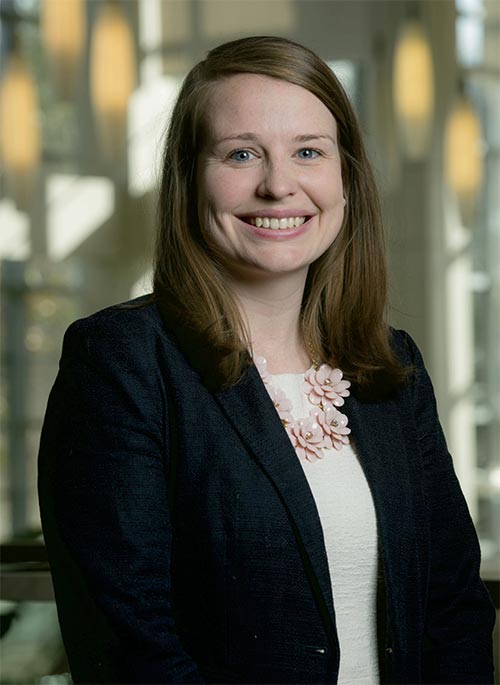 Meaghan Newkirk found herself immersed in the litigation process while working as a paralegal at a small New York City firm after her graduation from Cornell. “Paralegals were staffed to cases and had a hand in every aspect of discovery and every aspect of motion practice,” she says of her three years at Grais & Ellsworth, a financial and commercial litigation boutique. She became so engaged with one case that appeared likely to involve the firm’s first trial that she deferred her start at Duke Law until it settled, even though that meant putting aside a long-held plan to go through law school with her husband (and Cornell classmate) Zachary Newkirk JD/MA ’17, but her position had served its purpose, she says: “I thought that if I can get this excited about mortgage-backed securities, then I’m probably going to like law generally.”

Newkirk had already developed an interest in humanitarianism and human rights advocacy through a junior-year seminar and a subsequent summer internship in Washington, D.C., focused on community education in Africa. Studying law, she thought, could be a path towards a career focused on “working for the common good.” A complementary interest in litigation was one more reason to do so.

At Duke, Newkirk has cultivated opportunities to hone skills in both areas through coursework, summer jobs, two semesters in the International Human Rights Clinic working on the impact measures intended to counter terrorism have on women’s groups in conﬂict zones, and researching ways to combat human trafﬁcking as a Human Trafﬁcking Institute Douglass Fellow.

Newkirk’s pursuit of an LLM in international and comparative law along with her JD led her to connect with Clinical Professor Jayne Huckerby, who directs the International Human Rights Clinic and who suggested that a summer internship with the Charity & Security Network in Washington, D.C., would serve her interests well. Working at the resource center for nonproﬁts engaged in aid, development, human rights, and peace-building prior to attending the Duke-Geneva Institute in Transnational Law introduced Newkirk to the issue of counterterrorism ﬁnancing that subsequently became the focus of her clinic work.

Newkirk was charged with researching the implications of a 2010 U.S. Supreme Court case that upheld the U.S. ban on providing “material support” to terrorist organizations. Under the Court’s interpretation of the relevant statute, she found, the prohibition on ﬁnancially supporting terrorists effectively banned funding meaningful aid work by U.S.-based humanitarian organizations operating in areas under terrorist control. “The only things that you could give to people in those areas were medicine and religious materials,” she says. “You can give someone a pill, but you can’t give them the bottle of water to take it with, because it could be diverted to the [terrorist] group and then you would be seen as aiding that group.”

That summer research positioned Newkirk well, as a 2L, to help the International Human Rights Clinic complete its own analysis of the way international rules aimed at curbing terrorism through sanctions, criminal measures, and bank-reporting requirements impede women’s rights organizing and gender equality in conﬂict areas, largely by blocking activists’ access to donor funding and banking services. Last March, Newkirk accompanied Huckerby and representatives from the clinic’s partner in the project, the Netherlands-based Women Peacemakers Program (WPP), to the U.N. Status of Women conference in New York to unveil their report, titled “Tightening the Purse Strings: What Countering Terrorism Financing Costs Gender Equality and Security.” Their aim was to impress on policymakers how U.N. Security Council resolutions recognizing women’s right to participate in building peace could be undermined by overly broad efforts to combat terrorism. As one of several clinic students presenting key ﬁndings of the report, Newkirk addressed how on-the-ground programming by women’s organizations was being negatively impacted by counterterrorism ﬁnancing rules, pointing out that it sometimes forced women and girls to become reliant on terrorist organizations for service provision.

“To have that opportunity to engage with professionals who have been doing human rights work for 20 years and to have them listening to me as a student lawyer was both an intimidating and a cool experience,” she says, adding that she found it illuminating to learn about the role U.N. agency ofﬁcials play in crafting workable law and policy.

As an advanced clinic student in the fall 2017 semester, Newkirk spent six days in The Hague at a meeting co-sponsored by the clinic and WPP to plan next-step advocacy strategies with other nonproﬁt organizations engaged with counterterrorism ﬁnancing and access to funding. “Having interned in the nonproﬁt space, it was really interesting to witness high-level negotiations between different nonprofits and to see the reality of how groups function and make decisions,” she says.

During her third year, Newkirk has been researching the issue of child exploitation and trafﬁcking in Belize as a member of the Human Trafﬁcking Institute’s (HTI) inaugural class of seven Douglass Fellows. Selected for the nine-month fellowship through a competitive, national process based on academic ability, leadership potential, and commitment to human rights, Newkirk is researching barriers to and strategies for anti-trafﬁcking measures in a country that has done virtually nothing to combat the problem, according to the U.S. State Department.

“The HTI is investigating why prosecutions aren’t happening,” she says. “Are they just not ﬁnding victims? Are they ﬁnding victims and then choosing not to prosecute? Are prosecutors not collecting the right evidence or are judges not sentencing properly? We have to make sure there aren’t any holes.” Her research is being used to inform HTI’s work with police and prosecutors in Belize to improve anti-trafﬁcking outcomes. 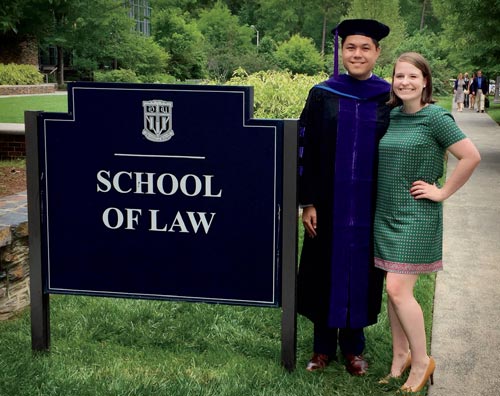 The Newkirks celebrated Zach’s graduation in May 2017.

In addition to planning a late-March HTI event at Duke Law focused on domestic and international approaches to combatting human trafﬁcking, Newkirk’s fellowship, which is intended to develop future leaders of the anti-trafﬁcking movement, involves mentoring from Eric Ha, the chief risk ofﬁcer and senior counsel at International Justice Mission. He offers, says Newkirk, invaluable insight and “a tangible bridge to the day-to-day reality of working in the anti-trafﬁcking movement.”

Through her extensive work in the ﬁeld, Newkirk has emerged as “an impeccable human rights practitioner,” says Huckerby. “She brings rigorous analysis, as well as a strong commitment to excellence and social justice to all aspects of her work.” And she has continued to develop as a well-rounded advocate through other elements of her law school experience, such as spending her 2L summer as an associate at Williams & Connolly in Washington, D.C., serving as an executive editor of the Duke Law Journal, and gaining a coveted spot in a January seminar on current issues in constitutional interpretation taught by U.S. Supreme Court Associate Justice Samuel Alito — as husband, Zach, had a year earlier.

Newkirk will catch up with Zach again after graduating when she clerks alongside him for a year with the same judge in the U.S. District Court for the Northern District of Florida — although, she jokes, she might “feel like the third wheel,” given his year’s head start on the clerkship. She then plans to rejoin Williams & Connolly and hopes to incorporate pro bono human rights work into her litigation practice.

“I’d love to be in a position to do human rights litigation and impact litigation around human rights,” she says. “I think ﬁguring out how to get there and how to do that will be a long-term project.”