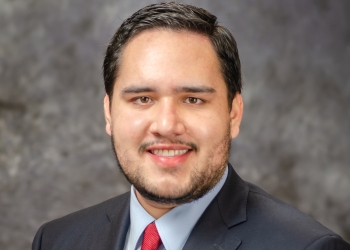 Mario N. Moreno ’21 is spending his summer as a 2019 Latham & Watkins 1L Fellow, one of 12 law students from around the country chosen to participate in the program designed to encourage diversity and inclusion within the legal profession. Moreno is posted in the firm’s San Diego office through the first half of the summer and will spend the second half in the legal department of one of the firm’s clients.

The firm received approximately 1,600 applications from students at more than 100 US law schools, according to its website. Factors considered in selecting the fellows included academic and leadership achievements, challenges encountered in advancing career objectives, life experiences that have shaped values and professional goals, and a demonstrated commitment to promoting inclusion and diversity in the legal profession.

Moreno was a 1L representative for the Latin American Law Students Association (LALSA) and the Federalist Society, and volunteered with the expunction clinic. He will be LALSA’s internal vice president during his 2L year.

“It was incredible to have been selected,” said Moreno, a native of Nogales, Ariz., who earned a bachelor’s degree in psychology from the University of Arizona in 2017. “I knew the program was extremely competitive when I applied, so even getting a screener and then a callback interview was unbelievable.”

As a fellow, Moreno was invited to participate in Latham’s Diversity Leadership Academy with other law students in March. The 1L Fellow program provides a mentor at the firm and can lead to scholarships and 2L summer placements.

“Getting a feel of the Latham culture in my interviews made it seem like the kind of firm where I wanted to practice law,” he said, noting that he hopes to pursue a transactional practice in either the corporate or finance practice areas. “Additionally, it never felt like the firm was paying lip service to diversity, but rather making a concerted effort to address issues of diversity and inclusion in the firm, and in the profession as a whole.”