Silver, a former litigator who attended Duke University as an undergraduate, will speak with Dean Kerry Abrams about his career, which includes 30 years with the pro basketball league. 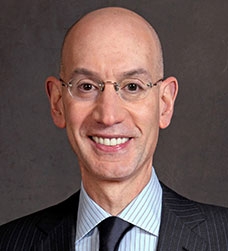 Adam Silver T’84, the commissioner of the National Basketball Association, will be the guest for a “Lawyers and Leaders” conversation with Dean Kerry Abrams, on Thursday, Sept. 29 at 12:30 p.m. in room 3041 of the Law School.

Silver, who graduated from Duke with a degree in political science, was named to the university's Board of Trustees in 2015.

As commissioner, Silver presides over five basketball leagues – the NBA, WNBA, NBA G League, NBA 2K League, and Basketball Africa League. He was named SportsBusiness Journal’s Executive of the Decade and has been ranked No. 1 on the publication’s annual list of the most influential people in sports business. He was also named to TIME’s 100 Most Influential People, Fortune’s World’s 50 Greatest Leaders, and The Bloomberg 50, Bloomberg Businessweek’s list of 50 people who defined global business.

Silver has spent 30 years with the professional basketball league. Prior to becoming commissioner in 2014, he served as deputy commissioner and chief operating officer for eight years, and was previously the president and COO of NBA Entertainment, among other roles.

Before joining the NBA, Silver was a litigation associate at the New York law firm of Cravath, Swaine & Moore, where he concentrated on media and antitrust cases. He also served as a law clerk to U.S. District Court Judge Kimba Wood in New York City.

“Lawyers and Leaders” is a series of conversations with pathbreaking figures in the legal profession and beyond. Dean Abrams’ previous guests have been Justice Goodwin Liu of the California Supreme Court; Marc Elias ’93, founder of Democracy Docket and the Elias Law Group; and Andrea Nelson Meigs ’94, partner at United Talent Agency.