New book from Salzman examines our relationship with drinking water 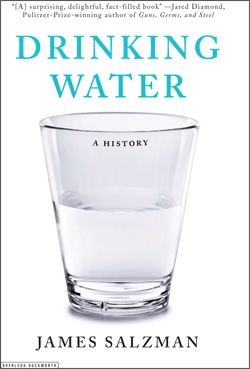 Professor James Salzman’s new book examines the history, science, and commodification of a basic human need that is often taken for granted:  clean, accessible drinking water. Salzman, the Samuel F. Mordecai Professor of Law and Nicholas Institute Professor of Environmental Policy wrote Drinking Water:  A History (Overlook Hardcover) for a general audience, after publishing several scholarly articles on the subject.  In a recent conversation with Duke Law Magazine, he said the idea took root in his Environmental Law class.

James Salzman: I was teaching a class on the Clean Water Act and mentioned offhand how remarkable it was that we’ve reached a point in American history where more people are provided clean water through the tap than ever before. Quite a remarkable achievement, given how drinking water has been a source of disease and death for most of human history. As I said this, I looked around the class and was struck because most of the students had bottles of water sitting in front of them.

I thought, “That’s weird. If there is more access to clean drinking water from the tap than ever before, then why are sales of bottled water shooting through the roof?” The more I looked into it, the more I realized that there was quite a bit that had been written on bottled water, but there was really nothing that took the historic perspective that looked at drinking water as a resource unto itself, and asked, “How has humanity dealt with this resource over time?” The issues that we are facing today are not very different from those faced in Sumeria or in Masada or in Versailles. People drink water. They need a reliable source, a safe source, and an accessible source. That’s hard to do, and you don’t find any settled society without clear rules for who gets drinking water, how it is kept safe, and how you identify safe water.

DLM: You’re looking at the change in that relationship over time?

JS: Exactly. The word “relationship” may seem odd when you’re talking about a glass of water, but I think that is exactly the right term, because how we see drinking water and how we think of it has a lot to do with how we manage it. For example, if you think drinking water should be accessible by right, that it is a human right, then basically it’s a government obligation to provide this. If, by contrast, you think drinking water is a commodity, no different fundamentally than pork bellies or Coca Cola, then the market should take charge of providing this. And what’s interesting is that we seem to be, as a society in 21st century America, moving from the idea of drinking water as a right to drinking water as a commodity.

There’s a story in the book about how the University of Central Florida built a brand spanking new football stadium in the 1990s with absolutely no drinking water fountains. They basically saw drinking water as a side business. In fact, security took water from people as they entered the stadium, which really cornered the market. In a sense, water fountains are sort of going the way of pay phones. You can find them, but you really have to look for them.

DLM: In the book, you address the idea of safety as a driver in this shift away from municipal drinking water.

DLM: How has the regulation of drinking water changed through history?

JS:  In my first article on drinking water, I was really interested in how governing drinking water as a unique resource has changed over time, so I went back to the Bible, to nomadic Middle Eastern societies, aboriginal Australians, indigenous groups in Africa, the Hindu castes in India, because I was interested in the current conflict in developing countries over privatizing drinking water. Should access to water be a human right? Should it be mediated by markets and basically privatized? I was interested in the origins of that debate, whether there were any insights we can gain from past civilizations, past societies’ treatment and management of drinking water. I found that in indigenous societies, drinking water was seen as a right. It was not marketed, it was not a commodity.  There were rules for who got access first and who didn’t, and there was something I call a “right of thirst” which meant that outsiders who were truly in need always got access to drinking water, even if local needs such as watering the fields or animals weren’t met. And the reason for that, presumably, is that you never knew when you might be a stranger and in need of water, so it was a good common rule.

DLM: When and why did that change?

JS: You first start to see drinking water treated as a commodity in ancient Rome. The Romans really understood water. It’s remarkable just how complex and sophisticated their system was, with the aqueducts and the giant sewer. They provided free drinking water in public wells placed about every 200 meters, and  the amount you took was limited by how much you could carry. But there was also a market. People were getting water piped into their homes, not for drinking, but for fountains and baths. They were charged for the service of delivering the water ─ not for the water itself ─  and because the system was gravity-fed and the water was always flowing down the aqueduct, they were charged not on how much they used, but indirectly by the diameter of their pipe. The money raised from this tax was used to pay for infrastructure. In modern terms we call this a cross-subsidized public good. The private consumption is paying for the free consumption. It’s a model you find in a lot of societies going forward, including today.

Privatization took over in New York City, at the beginning of the 19th century.  The city essentially handed over drinking water to The Manhattan Company, a firm created, amazingly, by Aaron Burr and Alexander Hamilton. They got a charter from the state legislature to provide safe drinking water to city residents and they were allowed to raise $2 million to do this. But Burr didn’t really care about water. He used it as a front to get the powers of a bank without the restrictions of a bank charter. He used most of the money for lending and that provided the foundation of Chase Manhattan Bank. If you look at the bank’s logo today, it is actually a cross-section of a wooden pipe. And until the early 1900s the bank was still pumping some water out of a well because there was a fear that they might be required to so in order to keep their charter. Eventually the City of New York just stepped in and moved to public provision of drinking water.

DLM: How easy is it to assess the safety of drinking water?

JS: I wrote an article called “Is It Safe to Drink the Water?” about how conceptions of drinking water safety change over time. In a sense, safety has always been a moving target because conceptions of safety are so dynamic. They turn in part on scientific understanding of the actual causes of disease. If you don’t understand the germ theory, it’s hard to know what makes water safe and what doesn’t.  You have very complicated tradeoffs. Chlorinating drinking water makes it safer, but it also creates, as a byproduct, some carcinogens. On balance, the experts think the carcinogens are less deadly to us than unchlorinated water. That’s an example of a risk-risk trade-off, and drinking water is full of them.  Like what should the level of arsenic be? At the start of the Bush administration there was a whole brouhaha because they wanted to revisit the arsenic standards for water. Arsenic is a naturally occurring substance, and in some areas it actually dissolves into the drinking water, so the question is, “What’s an acceptable level?”  They wanted to lower the level from 50 parts-per-million (ppm) to 10 ppm. People in Congress got up on their soapbox and said, “We know one thing, and that’s that arsenic is unsafe to drink.” But it’s not so simple. For one thing, we actually don’t know with certainty that arsenic levels at 10 ppm are less harmful than at 50ppm. It costs a lot of money to take arsenic out of water, and that’s money that could be spent for something else. We’ve got a limited checkbook. Now, that’s not to say “Don’t worry.” But I would say “Don’t freak out.” These are very, very low concentrations and scientists are extrapolating. The bottom line is that there is a lot of uncertainty with arsenic and a whole range of emerging contaminants.