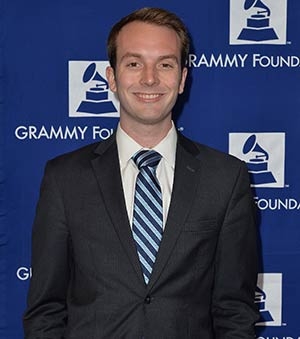 Scott O’Brien ’16 was honored on Feb. 12 by the Grammy Foundation as a finalist in the Entertainment Law Initiative’s annual writing competition.

O’Brien’s paper, “Of Blurred Lines And Baffled Juries: Williams v. Bridgeport Music And The Unrealized Potential Of Survey Evidence In Music Copyright,” was one of five student papers recognized at a luncheon in Los Angeles. He received a $1,500 scholarship and a ticket to the Grammy Awards ceremony, as well as other Grammy weekend events.

O’Brien wrote the paper for a class on music copyright with Senior Lecturing Fellow Jennifer Jenkins '97, director of the Center for the Study of the Public Domain.

“We talked about [the case] a lot in Professor Jenkins’ class,” O’Brien said. “She used it to show how music copyright infringement cases are actually litigated, and we spent one class doing mock oral arguments on the summary judgment motion about the scope of Marvin Gaye’s copyright.”

Williams v. Bridgeport Music is the case over Robin Thicke’s 2013 hit song “Blurred Lines.” In March 2013, a jury in the U.S. District Court for the Central District of California ruled in favor of the family of Marvin Gaye and Bridgeport Music that the song infringes on Gaye’s 1977 song “Got to Give It Up.”

While music copyright infringement cases often deal with a lifted riff or melody, the Gaye family accused “Blurred Lines” songwriters Thicke and Pharrell Williams of copying the feel and sound of “Got to Give It Up,” something that Thicke himself had admitted in interviews.

“My primary criticism of the ruling isn’t so much that the case came out wrong, but rather that the standard for infringement in the Ninth Circuit is overly accommodating for the party trying to prove infringement,” O’Brien said. “If you have 12-person jury, nobody has any musical experience, and they’ve already heard the songs at issue, it’s going to be really hard for them to separate out the total concept and feel of a song from the copyright-protected elements that the Gayes actually have legal rights over. My paper suggests that, absent a wholesale change in the infringement standard, courts should admit survey results of the intended audience of a song as non-dispositive evidence as to whether infringement occurred.”

Eric Lauritsen ’14 was a finalist in the same competition in 2014 for his paper on the distribution of recordings with compulsory licenses titled “Richard Cheese, Seu Jorge, And The Scope Of Permissible Changes Under Section 115 Licenses.”

“We had a luncheon honoring us that was attended by virtually every music lawyer in the country, so it was an awesome networking opportunity for those of us that wanted a career in the industry,” Lauritsen said.

Lauritsen has been working in the entertainment litigation group at Latham & Watkins in Los Angeles, but will soon join the music transactions practice at Greenberg Traurig, thanks in part to the connections he made during Grammy weekend.

"Who knew your seminar paper could win you a trip to the Grammys? I'm so happy for Scott and Eric — they were terrific students,” said Jenkins.

Following graduation, O’Brien plans to clerk for Judge William Pauley on the U.S. District Court for the Southern District of New York.