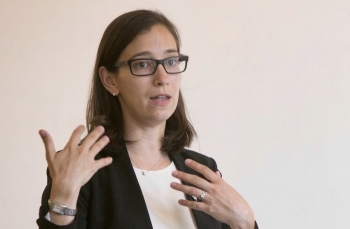 The debate over court packing has brought attention to recently-published scholarship by Professor Marin K. Levy. Court packing – the practice of adding or subtracting seats from a court, to impact its ideological composition – entered the national conversation after then-president Barack Obama was denied a vote on his pick to fill the Supreme Court seat vacated by the death of Justice Antonin Scalia and has gained traction after the Sept. 18 death of Justice Ruth Bader Ginsburg.

Levy’s work adds a new dimension to the debate with its examination of court packing at the state level. In her article, “Packing and Unpacking State Courts,” published in the William & Mary Law Review, Levy surveys legislation to pack (expand) or unpack (reduce) the size of the court of last resort in each state. She found that, contrary to long-held assumptions, court packing is indeed occurring at the state level, and attempts to do so have been increasing, with the introduction of more than 20 different bills to change the size of the highest court in 11 states in the past decade alone.

Levy, whose academic interests include judicial administration and federal courts, serves as director of Duke’s Program in Public Law, and is a faculty advisor to the Bolch Judicial Institute. She received the Law School’s Distinguished Teaching Award in 2017.

In the third installment of “Office Hours,” which features conversations with Duke Law faculty, Levy spoke about the article that has been cited in The New York Times, The Washington Post, and Politico, the politics of court packing, and her forthcoming research projects.

Your paper certainly came out at an opportune time. What prompted you to research this topic?

I was drawn into these issues because of what was happening in our own backyard. Back in 2017 the General Assembly decided to unpack the North Carolina Court of Appeals and I was shocked that this was happening, in part because we were at that very time having academic conversations about the strength of norms, including the norm against court packing. It seemed like a significant disconnect to be describing court packing as “off the wall,” and yet to discover it was happening underneath our noses in state courts. I thought the topic was ripe for exploration.

When I wrote this paper, the modest claim I was trying to make was that, given that we are seeing these different attempts to pack and unpack state courts across the country, we should take note, certainly within academia, that perhaps the norm against court packing is not as strong as we supposed it to be. And I think that is proving to be true. The fact that we’ve seen attempts to pack courts so frequently at the state level makes me think that norm is not all that robust.

Why do you think attempts to change the size of state supreme courts are on the rise?

I think because court packing is so norm-driven, there can be significant shifts in momentum.  So if a few legislatures attempt it and there are no significant political repercussions, and then a few more attempt it and succeed, it is not surprising that more and  more elected officials will consider it.

It is also worth noting that court-packing attempts tend to fall into categories. Some are in response to particular court decisions. We saw that in Florida and in Iowa. In other states, we see the legislature trying to defend court packing on case management grounds – that more justices are needed because the caseload is up. Often, though, those explanations do not hold up. That certainly was true in Arizona.

Furthermore, I think there are primarily two different goals with attempts to pack or unpack a court. The first is that you actually succeed and then you are able to appoint more members of the court who will be sympathetic to whatever your political position is. Or, in the case of court “unpacking,” you would be able to remove some seats and have a court that is ultimately more favorable to you. But the other goal is that, even if you are not successful in your attempt, you impact the justices’ decision-making, causing some to moderate or even to switch positions in key cases.

Were there commonalities among the proposed bills or states that attempted to alter their highest courts?

If you look at these different instances of attempts to pack courts, you can tease out what feels like a recipe. First, you need to have a state legislature and a governorship controlled by the same party – and so the goal is to expand the courts and ensure that the person who will appoint the new justices will be of the “right” political party. Second, you often have a situation in which doing court packing or unpacking is going to shift the court in a meaningful way. For example, if you look at Georgia, before the state supreme court was expanded there were four Democratic appointees and three Republican appointees on the bench. That court was expanded by two seats, shifting the power over to the right. And so again, often that is another key ingredient – that the elected officials are trying to meaningfully shift the court ideologically-speaking.

Were you surprised to find that most attempts at court packing were initiated by Republicans?

In some ways it’s not surprising, given that Republicans had more of an opportunity to try to pack or unpack courts. In the decade that I looked at, Republicans overwhelmingly had majorities in state legislatures across the country – far more than Democrats – so they simply had more opportunity to alter the structure of the courts. That said, there’s been a fair amount of scholarship now looking at the federal level suggesting that Republicans have engaged in constitutional hardball to a greater extent than Democrats have. So it may well be that what we are seeing is that story, translated to the state level.

How much does what’s happening at the state level translate to the federal courts?

If we look closely at the state courts where court packing attempts were successful, those courts look more like federal courts than we might think. For example, the governor in Arizona made quite a bit of the fact that he did not get to appoint the justices solely on his own, that there was an independent commission that suggested a slate of nominees and he had to select the justices from that list. And he said that this is quite different from the nomination process at the federal courts. While what he said is certainly true, it is important to note that it is the governor himself in Arizona who actually gets to appoint the members of the appointing commission, and it was suggested in the press that he deliberately “stacked” the commission with members who he thought would generate a list of justices that he would like to appoint. So there are certainly differences between the federal and state courts, but it is important to press on those differences and see if they are meaningful at the end of the day.

President-elect Joe Biden has said he’d convene a national commission to study court reform. What might that include?

It could include court expansion but also options like jurisdiction stripping or some options that could potentially be more palatable to the public, such as term limits. I think there could be some traction for the idea that we could have, say, 18 year term limits for the justices, and that might be a good thing for all of us.

We’ve seen, historically, commissions or committees convened about once a decade and I think they have done really important work. Right now we are talking about court packing in a much more meaningful way than we have in decades, and I think this is very much going to be on the table in the years to come.

How does this paper fit into your research agenda, and what are you working on now?

My research agenda is largely about judicial administration, with a focus on the internal operation of courts and the kinds of factors that go into judicial decision-making. And so getting to think about state courts has been really exciting. State courts in general have been underexplored and undertheorized, partly because they are quite challenging to study. It is far easier to study the federal courts of appeals because there are only 13 of them, as opposed to trying to get your arms around all 50 state courts. Again, the court packing / unpacking project was a lot of fun and I hope to do more work on the state side in the future.

Most immediately, I have several projects focused on the federal courts of appeals. I am working on a book project right now with Judge Jon O. Newman of the Second Circuit, looking into the inner workings of the federal courts of appeals. We have interviewed all the chief judges of the circuit courts, we have surveyed the clerks of court, and we have done a deep dive into the local rules and internal operating procedures of the different courts, and are really trying to provide the public (and the courts themselves!) with critical information about how the federal appellate courts operate. That has been great fun, and I have some other projects thinking more specifically about chief judges and senior judges. So I am really trying to dig into what is going on right now in our court systems.

If you were to write a biography of any judge, who would you choose?

I love judges together. If I had to write a biography, I would actually want to write about a particular court in a particular time. I have a soft spot in my heart for the Second Circuit. That is where I clerked. There is a particular era that is so famed – the Learned Hand court – and it would be fabulous to get to dig into that time period and those judges, which include Learned Hand’s cousin Augustus Hand and Charles E. Clark, who was instrumental in drafting the Federal Rules of Civil Procedure. We really just have tremendous figures there and it would be fun to explore that time period and those judges’ lives.

You are quite active on Twitter, where you tweet as @marinklevy. Do you see social media as a good way to educate the public about judicial administration?

Stepping back, I was drawn into judicial administration because there is so much that we don’t know about how courts operate and how courts have been structured over time – and I think those details are fascinating and quite important for the kind of justice our courts provide. And so it has been enormously rewarding to get to share those details over social media, particularly with law students, law professors, and members of the bar. Even judges have told me they enjoy these tidbits!

To take a recent example, the president’s lawyers mistakenly filed a lawsuit in the U.S. Court of Federal Claims. It then became a moment to explain what that court was designed to do – what its history is, and what its jurisdiction is. Knowledge of judicial administration can be quite valuable. It is useful for academics and practicing attorneys to appreciate the different moving pieces in our courts structure. And again, it has been rewarding to share some of that knowledge over social media.