On July 24, Clinical Professor Carolyn McAllaster shared a stage in the nation’s capital with U.S. Secretary of Health and Human Services Kathleen Sebelius and Surgeon General Regina Benjamin, among others, as they examined policy options to stem the epidemic of HIV and AIDS in the United States.  The “AIDS in America Forum,” co-sponsored by the Ford Foundation and the Kaiser Family Foundation and hosted by the Washington Post, coincided with the 2012 International AIDS Conference, where leading experts and policymakers grappled with the global crisis. 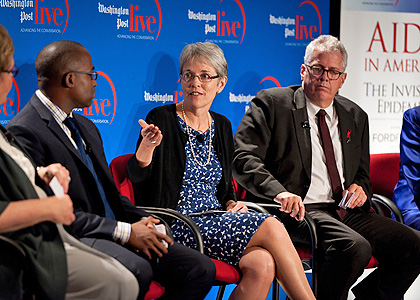 Prof. Carolyn McAllaster participates in a panel discussion on the AIDS epidemic in the U.S.

McAllaster’s participation in the forum reflects both her stature as an advocate for people living with AIDS and HIV and the depth of work being done by students and faculty in Duke’s AIDS Legal Project, which she has directed since 1996, and the AIDS Policy Clinic, launched in 2011 with a grant from the Ford Foundation.  Clinic activities over the past year included the release of a report detailing the spread of AIDS in nine Southern states, policy research and advocacy at the state and federal levels, and the ongoing provision of free legal assistance to low-income HIV-infected clients.

McAllaster participated in two satellite panels during the International AIDS Conference.  The first followed a July 23 screening of “deepsouth,” a documentary about the regional spread of HIV and AIDS that focused on the experiences of individuals and minorities with AIDS, service providers, and advocates in the deep South, particularly in rural areas.

“What really came across in the film was the isolation so many in the South feel when they test positive for HIV and the importance of having an army of support so that they feel safe, first of all in getting tested, but then in getting care,” said McAllaster.  The film’s themes carried over into the next day’s discussions on “next steps and solutions” to the US and the Southern epidemic, she said.

“People kept talking about the best of times and the worst of times,” McAllaster said. “We know now how to suppress the virus so that it can’t be transmitted. The science and medicine have advanced to that point. We can stop this virus. What we haven’t yet figured out and what is really, really crucial are these psycho-social support networks that get people in rural communities into care. You’ve got people in communities that are already facing stigma, and the HIV adds another layer.”

Over the past year, McAllaster served as project director for the Southern HIV/AIDS Strategy Initiative (SASI), which sponsored research on the spread of HIV/AIDS in nine Southern states.  AIDS Policy Clinic student research was critical to the report, released last November, which showed that the Southeastern United States is experiencing the highest rate of new HIV/AIDS infections nationally.  The Ford Foundation funded the SASI work.

“The Ford Foundation picked 12 organizations that work with people living with HIV to focus on during the International AIDS Conference, to call attention to the domestic problem,” McAllaster said. “They’ve become familiar with what we’re doing in the AIDS Legal Project, both in terms of direct service to clients and also the policy work.”

All 12 organizations, including the AIDS Legal Project, were the focus of a Ford Foundation/Kaiser Family Foundation-sponsored campaign, during the week of the conference. The campaign, called “Together We Are Greater Than AIDS,” featured photos and information about all twelve organizations displayed prominently in the Convention Center Metro station, and on buses and bus stops across Washington.

Lauren Haertlein ’12 worked on matters relating to federal and state AIDS policy during both semesters of her 3L year; she was one of three students, along with 3Ls Lucy Chang and Bethany Lilly, to enroll in the policy clinic’s pilot session in the fall 2011 semester.

“Health care policy is ultimately the kind of work I want to do, and the AIDS Legal Project was one of the reasons why I chose Duke Law,” says Haertlein, who currently clerks for Judge James A. Wynn Jr. on the U.S. Court of Appeals for the Fourth Circuit. “We were working on a couple of projects that had to do with the AIDS Drug Assistance Program and high-risk insurance pools, and we also did some Medicaid transportation research here in North Carolina.  A major problem is just getting the population to health care providers. So we did a lot of research on the state plan that is in place, whether or not counties are complying with it, and ‘best practices’ could be identified, and what we could do to move toward a more helpful system.”

The students also worked with organizations assisting people with HIV in other states. 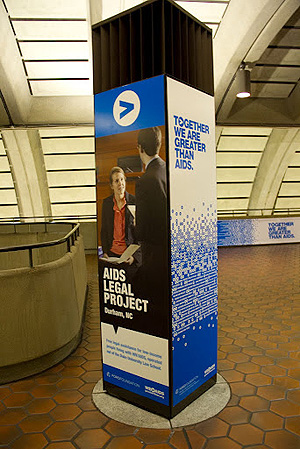 Photos and information on Duke’s AIDS Legal Project were prominently displayed in Washington, D.C., including this display at the Convention Center Metro station, as part of an awareness campaign during the 2012 International AIDS Conference.

“What we basically did was provide manuals on law relevant to serving clients with HIV for organizations getting off the ground and doing the kind of work that the clinic does [in providing direct services to clients],” Haertlein said.  “Lucy Chang prepared an Alabama manuscript and Beth Lilly went with Allison Rice to train attorneys in Alabama. In January Carolyn and I went down to Jackson, Miss., and trained attorneys on serving clients with HIV.”

Haertlein, who researched and compiled a manual on HIV and the Law in Mississippi including the Health Insurance Portability and Accountability Act (HIPAA) in advance of the training session, said the training was a highlight of her clinic experience.

“It was a full day of lectures and presentations and people were very into it. People were really engaged and asking questions,” she recalled. “It sort of mirrored my whole clinical experience with Carolyn and [clinic Supervising Attorney] Allison Rice, which was about people who are very positive and very engaged in trying to help with this problem.”

Working with policymakers and stakeholders on the issue of ‘prior authorization’ was another highlight, Haertlein said.

“The question we were looking at was whether or not the state should put in place prior authorization requirements on HIV medications for Medicaid recipients, which would mean that dcotors have to get approval from the state Medicaid agency before a drug can be dispensed,” she said. “The state was looking at implementing it to save costs. We researched and addressed the issue's potential impact on costs and on access to medicines. We did a lot of legwork from the ground up. I interviewed Duke doctors on what they thought the ramifications would be, I talked to pharmacists, I talked to pharmaceutical companies.

“Ultimately we concluded they should not impose prior authorization ─ and they didn’t, although I think it will be an ongoing battle. But that is the kind of thing I hope I’ll be able to do in my career: Research a problem, talk to experts about it, talk to policy makers on it and pitch what I hope are the best practices.”

Haertlein said her three semesters in the AIDS Legal Project and AIDS Policy Clinic offered her experiences that will likely inform her practice throughout her career.

“I learned a lot about research and writing and especially time management,” she said. “You handle many different kinds of cases, from clients who just need something concrete like a will, to clients who are in the middle of lengthy disability cases. Because the work is so varied, and also because it’s easy to get emotionally attached to a particular case or client, Carolyn and Allison help out a lot with time management. I think I’ve already put some of those skills to work.”

After 16 years, the need for the clinic’s direct legal services to individual clients shows no sign of abating, said McAllaster.

“There is a real problem throughout the South, and North Carolina is one of the states where new infections are occurring at an alarming rate,” she said. Stigma and confidentiality are key challenges faced by clinic clients and central to some of its policy initiatives, she added.

“When a person is diagnosed with HIV, it is, for nine out of 10 people, a secret. Maybe a couple of close family members and medical providers might know, but most of our clients haven’t told many people. So, when HIV status is disclosed without authorization, when people find out this very bad news, they tell other people and it is devastating. At least once a week we get a call about an instance like that. Hospital emergency rooms are places where this is a problem. Even if folks are there for issues totally unrelated to HIV, doctors will mention it, and if that person is there with a friend or family member who doesn’t know, it can really be a problem.”

The clinic has worked with care providers over the past year to improve policies relating to disclosure.

“We’ve teamed up with Medical Mutual Insurance Company, which provides liability insurance to the vast majority of doctors and hospitals in North Carolina, to do education,” said McAllaster “We’ve written an article for their newsletter that is distributed to all their insureds, but we’re particularly interested in reaching ER doctors. And then we’re hoping to do some training with their members. We decided it’s really tough to tackle this one case at a time.

“Part of the task is just education,” she added. “People still don’t understand that you really can’t get HIV easily.  A  Kaiser Family Foundation survey indicated that 37 percent of respondents still thought you could get it from kissing. It’s going to be very difficult to make some of the cultural changes that will lead to less stigma for some of these high-risk communities, so we have to work on parallel tracks. We have to address poverty issues, we need to address acceptance of the gay community in certain communities. AT the same time, we need to be working to provide support for folks so that they’ll stay in care to remain healthy and to prevent further transmission of the virus.”