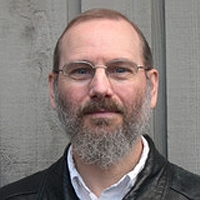 Pate Skene admits that being a 1L is, for him, a bit like being a kid in a candy store.  Speaking after completing his first month of classes, the 56-year-old Duke University neuroscientist speculates that he’s had “the longest unrequited love affair with the law” of any law student.

“On the very first day of LEAD week, I said to a classmate that I have walked by the Law School for almost 20 years, periodically saying, ‘One of these days…’  And today is the day,” he recalls with palpable enthusiasm.  “In 1974, in fact, I was on the verge of coming to Duke Law School, but at the time didn’t see how law and science would mesh and felt I had to pick one over the other.  At the time, I felt it would be difficult to look back on life and not to have done science.  So that’s what I did.”

Skene received his PhD in neurobiology in 1980 from Washington University in St. Louis before launching his faculty career at Stanford University.  He joined the neurobiology faculty of Duke University’s School of Medicine in 1991, where he has researched issues related to brain development and regeneration.

Also on the faculty of the Duke Institute for Brain Sciences, Skene has, in recent years, developed an interest in neuroeconomics, the application of neuroscience to behavior and decision-making.  Curiosity about its applicability to law prompted him to make connections with Duke Law professors as colleagues, before he decided to pursue a JD.  Conversations with Professor Doriane Coleman about torts led Skene to nascent collaborations with Professors James Coleman, Theresa Newman, and Neil Vidmar, who are interested in eyewitness identification and errors in decision-making that can result in wrongful convictions in criminal cases.

“It became apparent, as we kicked around ideas, how little I knew about law and how important it would be, if you were interested in applying a neuroscience viewpoint to looking at problems in law, to actually know something about problems in law,” Skene says, laughing.  “That became more and more interesting, and more and more germane, as these things do.  I finally decided that it was worth taking the plunge.”

That doesn’t mean Skene has given up his distinguished scientific career.  He is as enthusiastic about explaining his lengthy research on the regeneration of axons — the primary transmission lines of the nervous system, responsible for transmitting electrical impulses to the brain — as he is about law.

“It seems that within mammals’ brains and spinal cords, we’ve had a progressive loss of the ability to regenerate axons over the course of evolution,” he says.  “We’re getting a grip on the molecular mechanisms that have arisen to impede regeneration and that lets us think about what they are really for.  I’ve long been fascinated by the idea that signals that have the effect of limiting regeneration have been selected in evolution for other functions.  So by studying what these molecular pathways do for us in the normal, healthy brain, and by studying what they do for us in regeneration, not only do we learn something about that clinically important problem, but we also get our hands on mechanisms that will tell us something about how our brains, as mammals, have evolved to be different.” Skene and his colleagues have submitted a significant paper on that research.

More recently, Skene has been investigating how genes regulate circuits.  He hopes to “ramp up” his research into the genetic and neural regulation of behavioral traits, and how those mechanisms might inform our understanding of decision-making in the law and society, when he completes his current sabbatical from the Medical School.  (Mindful of the American Bar Association rule prohibiting first-year law students from working without special permission from their law school, he is quick to note that Duke Law’s dean of students has approved his scaled-back lab duties and that he may take up to five years to complete his JD, as ABA rules allow.)

Skene is not filtering all of his first-semester core law classes — Constitutional Law, Torts, and Civil Procedure — through the neural and biological points of view.  “The agenda before us in each class is completely engaging, both intellectually and because we have a lot of reading to do,” he says.  “We all bring our own perspectives to it, but it’s not hard to put other things aside, because the material and demands of the courses draw you in.  It’s just a whole lot of fun and a remarkable opportunity.”