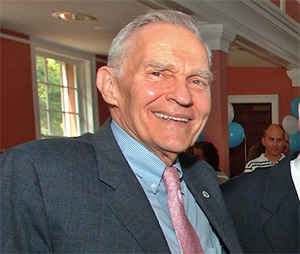 Friends of Paul Hardin III ’54, T ’52, Hon. ’94, have endowed a new student scholarship honoring the distinguished Duke Law alumnus who was a member of the faculty from 1958 to 1968 and later served as a Duke University trustee.  The scholarship recognizes Hardin’s career in service to higher education, as well as the positive impact he had on his former students and the administration at Duke University.

“Paul Hardin’s remarkable record of leadership began as a student at Duke and it continued as a teacher and a trustee here, so it is fitting that he is being honored with a scholarship in his name,” said Dean David F. Levi. “We are grateful for the donors whose generosity ensured that future generations of Duke Law students will know the many contributions Paul made to higher education.”

The son of a Methodist minister and bishop, Hardin was born in Charlotte and graduated Phi Beta Kappa from Duke University. At Duke Law, he finished first in his class and was editor-in-chief of Duke Law Journal (DLJ). The day after graduation, he married Barbara Russell Hardin WC ’54.

Four years later, following service in the military and a short stint in private practice in Birmingham, Ala., Hardin accepted an offer from Dean Elvin R. “Jack” Latty to return to Duke Law. He taught a variety of classes during his ten years on the faculty, including Torts, Evidence, Trial Practice, and Jurisprudence.

“Paul was a favorite professor for many of the members of our class,” said Lanty L. Smith ’67, a member of the Law School’s Board of Visitors and a benefactor to the Paul Hardin III Scholarship. “He was relatively young, he was not that far away from practice, and he had been a successful litigator. He was extremely personable, always available to students.  Many years later we renewed our friendship when we served together on the Duke Board of Trustees.  His exceptional personal qualities and values were the same, and he was an outstanding Trustee for the university. ”

From 1960 to 1963, Hardin was faculty advisor to DLJ, and he was the recipient of four research fellowships from the Ford Foundation, which enabled him to spend the summers of 1965 to 1968 in, respectively, Scotland, Jamaica, Canada, and Nigeria. He also served as a lay leader in the Methodist Church.

In 1968, Hardin became president of Wofford College. His tenure saw the hiring of the first African American administrator, the first athletic contests against historically black colleges, and the first women admitted as day students, according to a biography on the college’s website. Hardin would go on to lead Southern Methodist University for two years, followed by 13 years as president of Drew University.

Hardin returned to his home state in 1988 when he was chosen to lead UNC-Chapel Hill.  His tenure coincided with the celebration of the bicentennial of the university and the raising of a $320 million fundraising campaign. He retired in 1995, but continued to teach in the UNC School of Law.

Hardin remained active at his alma mater, as well. In 1994, he received an honorary degree from Duke University. The next year, he joined the Board of Trustees, and he remains a trustee emeritus. He and Barbara live in Chapel Hill.

“Paul has two great loves of wonderful institutions – Duke and UNC,” said Smith, who is CEO of Tippet Capital in Raleigh. “I hope the people who hold the scholarship will get to know Paul and get to know what he represents, what he’s contributed to the world.”

To learn how you can support the Paul Hardin III Scholarship, please contact Katharine Buchanan at (919) 613-7217 or Buchanan@law.duke.edu.